Recently, a 400 years old drainage system at the Lahore Fort was unearthed by a team of experts led by Najam Us Saqib, a leading architect and the director of Conservation and Planning at the Walled City Lahore Authority (WCLA).

The project was started in early January but due to Covid-19, the progress was slow. However, the team consisting of architects Azeem Daad Khan and Faseeh Gillani, and civil sub engineer Hafiz Umar, was eager to make the drainage system functional by monsoon.

Najam Us Saqib says his resolve to pursue the project stemmed from his belief that the infrastructure of Mughal buildings is traditionally much stronger than their architecture. “The Mughals worked meticulously on both a building and its infrastructure,” he told the writer. “The water supply system through the wells, the Persian wheel systems, the tanks, the hydraulic system, and the design of terracotta pipes are all proof of the genius of architecture and infrastructure of those times.”

The discovered drainage system dates back to Emperor Akbar’s time. Saqib says that the system was so intelligently designed that it not only prevented damping of the walls, but also collected sewerage water in a smart way.

The drainage pipes are said to have been enormous, with openings on both sides. That is why even the Taj Mahal’s water system, with its 155-odd fountains, has no pumps behind it. The hydraulic design never allows a reduction in the water pressure, it’s always the same pressure in each fountain.

The WCLA took the responsibility for the Lahore Fort project circa 2016. The previous teams had lacked knowledge of architecture and ended up with short-term solutions for the problem areas. The new team, headed by Saqib, understood that there must be a reason behind the differential settlement of a building.

The team started with the courtyard. The building was found to be tilting on one side. They then investigated the infrastructure of the Fort. They found that the cracks on the inside arch were moving in one direction and the building was tilting in the other.

“We needed to understand the movement of the cracks as well,” Saqib explains. “Until and unless we did that, we couldn’t do anything. If the crack is moving towards the top left it means something. We did our basic analysis and came to the conclusion that there was a serious problem of water accumulation somewhere. The question was, where?”

The WCLA took the responsibility for the Lahore Fort project circa 2016. The previous teams had lacked knowledge of architecture and ended up making short-term solutions for the problem areas. The new team understood that there must be a reason behind differential settlement of a building.

The next building, the Moti Masjid, was also elevated about six feet and there was no water outlet in its courtyard. It was initially thought that because of the marble there was no seepage. But serious cracks could be seen in the marble arch, right behind the Makatib Khana which also had major cracks. That was the point where Saqib’s team decided that there was water penetration and that they needed to trace it down.

“When we started digging we saw some gar,” he continues. “We opened one slab and took out the gar about seven feet deep. We found a big ditch which had a lining on all its sides. This meant that it was actually a valve.

“It also had a concrete lining, which meant that it had been made and designed by the Mughals for that particular building. As we dug further from the sides, we spotted a drain inside. An amazing thing about it was that instead of going outwards, the drain was coming inwards!”

Saqib says he couldn’t understand it at first: “I thought that perhaps there was a drain upwards and this might be the main gutter. But when we went on, it had no pathway, which seemed impossible!”

The Makatib Khana, on the other hand, had no outlet. And the curved line that was dug had no outlet either. When nothing further could be found in the Moti Masjid drain, another slab was opened outside the mosque. To the team’s astonishment, the very drain that had no outlet, a drain linking to the same route, was discovered outside Moti Masjid. There was no more digging of the gar.

Finally, the drain that was coming from inside to the outside of the Moti Masjid was cleared. But the question remained: where was it going?

It’s challenge to understand that one drain was going upwards, the other downwards; which could mean that there are two levels of drains. But how is that possible? To find an answer, another pit was opened in the courtyard. Only after this, it was concluded that both the drains found earlier were going into the courtyard and not outside.

According to Najam Us Saqib, “We first opened one pit five feet deep, then the upward drain that connected to the Moti Masjid drain. It had very high and well calculated slopes. It connected to another drain. It’s so big that you can actually walk into it. This drain starts at Moti Masjid, comes to Makatib Khana, goes all the way to the drive area at the T-junction into the air valves which were designed in such a way that air could flow in and people could clean the drains in those times.”

This was just the exploration of one portion of the drainage system. “This year, we’ve been able to discover the drain and put it to function for rainwater,” he adds.

The team’s other discoveries include the T-junction where there is another drain that goes up to the Alamgiri Gate. This part is operational now. It is two feet below the ground and 6- 8 ft long.

The drainage system has been divided into 4 areas and the restoration work is under way.

The author is a Lecturer at the Institute of Arts and Culture, Lahore and has dedicated her life to restoring the identity of Pakistanis as a Nation through multiple ventures 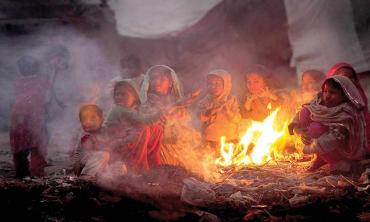 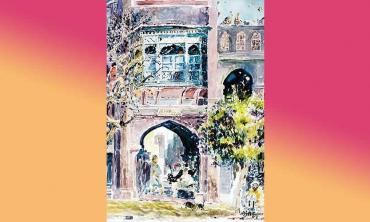 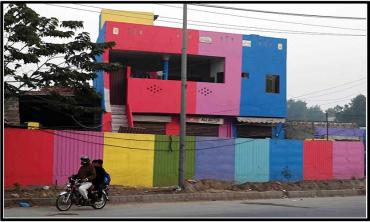