Moin Khan’s pugnacious batting, often in difficult circumstances, is best remembered for the little cameo that he played in the 1992 World Cup semi-final against New Zealand.

This week we continue our narrative of those twenty two Pakistani families where more than one family member has played Test cricket.

Imran would go on to play 40 Tests for Pakistan. His career came to an unfortunate end when he withdrew from Pakistan’s tour of Zimbabwe in 2013 because his wife had become seriously ill with Multiple Sclerosis. He was never picked for the national side again.

Imran Farhat is the only Pakistani batsman apart from Hanif Mohammad to score two triple centuries in first-class cricket. His triple centuries came in consecutive years, the first in 2013 and the second in the following year. Interestingly in the game for Habib Bank against PTV in January 2014 while Imran got a triple hundred, Humayun Farhat had seven dismissals behind the stumps in an innings which is the second highest by a Pakistani stumper.

Humayun Farhat’s debut match was the only test he played for Pakistan. He is the only wicketkeeper in Test history who did not make a single dismissal in his entire Test career.

Humayun had also been the Pakistan Under-14 national badminton champion, following in the footsteps of his father who had played badminton for the Pakistan national team.

Mohammad Ilyas has been mentioned in an earlier column of this series and is Imran Farhat’s father-in-law. An opening batsman and leg break bowler, he has had a tumultuous relationship with Pakistan’s cricket establishment. On the 1972-73 tour of Australia and New Zealand he was left behind in Australia by the touring party when they embarked for New Zealand. Without documents or money he slept for a few nights in a park before the retired Sri Lankan all-rounder Gamini Goonesena, who had settled in Australia, gave him shelter. Ilyas appealed to the Australian Prime Minister Gough Whitlam for help and was provided with money and a passport following which he settled in Australia. He returned to Pakistan many years later and became a selector for both the senior and junior national sides.

The Farhat brothers and Ilyas have scored a total of 2895 Test runs with 4 centuries. In first-class cricket they have a run aggregate of 26,019 which includes 54 centuries. They have 3 Test wickets and 174 first-class wickets between them. Humayun Farhat has 494 wicketkeeping dismissals to his credit.

Fawad Alam comes from a family of cricketers. His father Tariq Alam, paternal uncle Rafat Alam and maternal uncle Waheed Mirza have all played first-class cricket in Pakistan. Two of his relatives have also played Test cricket. While his father-in-law Mansoor Akhtar is a well known Pakistani Test cricketer, Fawad’s father revealed in an interview that the English Test cricketer Usman Afzal is also a cousin of Fawad.

Fawad made a century on Test debut against Sri Lanka in 2009. He was the first Pakistani to do this in an away from home Test. This is also the highest score on Test debut for a losing cause.

Despite phenomenal success on the domestic circuit Fawad has not found a regular or stable position in the national team. He has played only three Tests so far while in ODIs, in the first seven games alone, he was made to bat on every batting position from number five to number nine. In fifteen domestic seasons since 2005-6, Fawad has had a batting average of over fifty in twelve of these seasons with a highest of 97.70 in 2008-9.

Fawad’s first-class career batting average of 56.84 is the highest of any Pakistani and among the top twenty five highest in the history of the game. This left handed run maker with an unorthodox batting stance is also one of the best fielders in the country.

Fawad’s father in law Mansoor Akhtar had an extended run of ten years in both tests and ODI’s. He was highly regarded by Imran Khan, but was never able to reach the heights that had been expected from him. He is best remembered for an opening wicket stand of 561 runs with Waheed Mirza, which is still a world record opening partnership in first-class cricket.

Fawad’s father has identified Usman Afzal as Fawad’s cousin. Usman played three Tests for England in 2001, as a middle order batsman. He now runs a cricket academy, after an earlier stint as a restaurant owner.

Fawad, Mansoor and Usman have together scored 988 Test runs with 1 century, while their cumulative first-class figures are 40,081 runs and 103 centuries.

Moin Khan was a gutsy wicketkeeper-batsman whose constant ‘shabash’ to the bowlers from behind the stumps became a hallmark. He is credited with first using the word ‘doosra’ to describe Saqlain Mushtaq’s special off spinner that went the wrong way after pitching. Soon the commentator Tony Greig picked up this term, started using it in his commentary and it became this delivery’s official name.

Moin’s pugnacious batting, often in difficult circumstances, is best remembered for the little cameo that he played in the 1992 World Cup semi-final against New Zealand. Coming in at number eight with only twenty two balls remaining he smashed 20 in just 11 deliveries to take Pakistan to a memorable win.

Moin played 69 Tests for Pakistan captaining them in 13, being one of five wicket-keepers to have led the national test side. His 287 dismissals in ODI’s is the highest number for a Pakistani keeper. His ODI tally includes 73 stumpings which is the 4th highest for any wicketkeeper in ODI history. Across all three formats of the game, namely Tests, ODIs and T20s, Moin has a total of 435 dismissals in international cricket. This aggregate is the twelfth highest in the all time list of international wicketkeeping dismissals.

Interestingly Moin’s highest first-class innings of 200 not out came in his last first-class match. In ODIs he also has the dubious distinction of eleven golden ducks, or first ball dismissals for zero. This is the third highest for any Pakistani player. Moin also became the first Pakistani batsman to score a T20 century on Pakistani soil when he made a swashbuckling 112 in 59 balls for Karachi Dolphins against Lahore Lions in 2005.

After his retirement Moin has served on different occasions as Manager, Chief Selector and Head Coach of the national team. During the 2015 World Cup he was the Chief Selector of the team when he was recalled for visiting a casino in New Zealand during the tournament. Moin also runs a cricket academy in Karachi.

Nadeem Khan is Moin’s elder brother. A left-arm spinner, he has played two tests for Pakistan. He also has the unusual distinction of playing in the Central American Cricket Championship when, in 2019, he represented the MCC in this tournament. Nadeem has recently been appointed by the Pakistan Cricket Board as the Director High Performance Unit. Prior to this he managed the Multan Sultans in the Pakistan Super League or PSL.

Moin and Nadeem have 2775 runs with 4 centuries between them in Test Cricket. Their first-class tally is 10,412 runs and 14 centuries. Nadeem has taken 2 Test wickets and 534 in first-class cricket. In wicketkeeping Moin has 148 Test dismissals and 553 first-class dismissals to his credit.

Next week we will introduce you to some more families of this exclusive club of players and clans who have contributed so richly to the development of cricket in Pakistan. 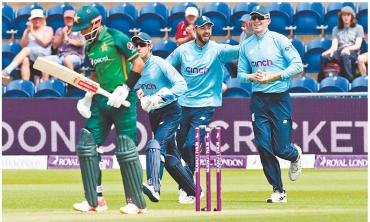 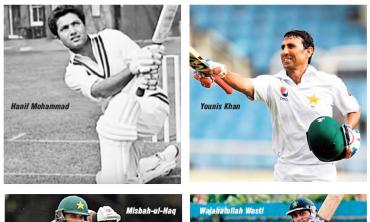 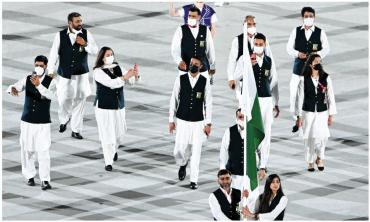