For a moment, imagine trekking up a path in the high mountains to observe a mother grizzly bear. She might be curled up, asleep and magnificent, but she is very dangerous when aroused. Now, multiply the one mother bear by one thousand. The feeling of a somnolent power of tremendous anger and destructive force, this is one way to describe the feeling of approaching Passu Glacier in Gilgit-Baltistan.

Just in case the appreciation of the natural world was getting cosy, a trek up the Karakoram mountains to be near a glacier is a great wake up call to the awe and fear that nature also evokes.

During my first doctoral research tutorial, my professor and I had a conversation about the ways in which indigenous communities might experience nature. We spoke from our field experience, for neither of us were neophytes. I offered the elements of sustenance, home, sense of the sacred and other positive human experiences with nature. Looking deep into the professor’s blue-grey eyes, I will never forget what she offered up in our tutorial discussion: fear, unpredictability, danger and destruction are also nature associations.

Now, 15 years after that discussion held in the cosy safety of an Oxford college, I remembered those exemplars as we spent a day trekking from Borith Lake to a weather station high up (at almost 10,000 feet altitude) near Passu Glacier.

A trek such as this is a meditation for the human being and has been since time immemorial for those who traversed the great mountains of the world on foot, alone, in groups or in caravans with their pack animals. The arena of such a walk is a vast emptiness, under an ice-blue sky, surrounded by white, snow-tipped peaks – in this case, the series of jagged summits called the Passu cathedrals – and sensing crumbling, dark slate and sand under one’s feet. The north-south axis of one’s being is pinned into a point under a limitless upwardness above one’s head, and a vertiginous downwardness of the sheer cliff below one’s feet.

Pakistan is home to the most glaciated locations in the world outside the North and South Poles. Not many people realise what this means or why it has come to be so. First, to explain what these fear-inspiring glaciers really are, and then how there are so many in the mountains that fall into our territories in contrast to the other great mountain ranges of the world.

Glaciers are masses of ice accumulated into the folds of mountains over millennia - every summer when the sun’s heat enters the ice it causes movement. Sounds simple enough, except when you realise that glaciers have behaviours almost like a giant creature. The ice behaves as one massif. As a monument of ice, a glacier moves and shapes the land like a giant sculptor, cutting into slices enormous mountain masses like sponge cake, grinding upturned layers of sedimentary earth into crumbly moraine, and hollowing out valleys into ravines and plateaus: all on a landscape scale that is larger than most people can conceive, and a time period of thousands of years.

To hear a glacier move, which I once did in spring, is never to forget its earthshaking power. Not quite like the rumbling of an earthquake, not an explosion either, it is as if the bowels of the earth are groaning; thus, the metaphor of a sleeping grizzly bear as glacier.

Yet, in shorter time cycles of the annual calendar, these same fearsome glaciers let loose glacial melt-water that is channelled by humans into sources of cultivation, sustenance and home. The thing is, they are benign and fearsome both at the same time, which goes back to the Oxford discussion about relations to nature being fearsome and lovable.

The reason why we have so many in the Karakorams is a relatively simple matter. These mountains are new in geological time, and like new teeth, they are very jagged, not being rubbed smooth by the elements. This gives them a great many crevices in which to collect ice, which is the principle of a glacier. In contrast, consider for a moment, the nearby Himalaya, and you will imagine much rounder silhouettes and stretched out ranges: fewer crags in which to collect ice. So most of the combined glacial ice of the Himalaya (India, Nepal, Bhutan) is less than half of the glacial ice in the Karakoram of Pakistan.

Some 110 years ago, the village of Passu upon which I looked down on our trek, was suddenly cut down in half when a glacier let out a burst of water into the Hunza River. Overnight, half the households of Passu were swept away and dissolved into river mud. Sudden injections of heat can make these glaciers do fearsome things such as this outburst event. Yet, Passu’s lifeblood even today is the glacier that normally lets out manageable melt-water to make it a human dwelling.

Fear, love and seeking knowledge – all of these mark our relations with the great forces of nature. And it is these, in an unpredictable mix, that frame the views that we get when beholding the magnificent creature of ice called Passu glacier. 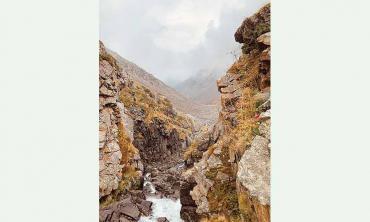 The other side of Kumrat Valley 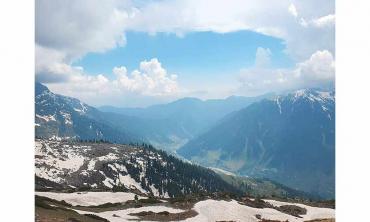 Beyond a frozen wall 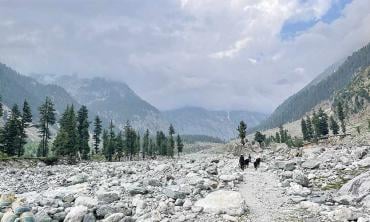