History and the pursuit of ideals

“History is just a catalogue of success stories” is what people usually tend to assert with an excessive measure of certitude. History has been written at the sheer will of the powerful and it does not reflect the voice of the meek and the marginalised.

Certitude and definitive conclusions are no longer in vogue in the discipline of history. Countless half-truths and subjective inferences and opinions mostly flesh out the skeleton of this branch of knowledge. Now the scope of history has gone beyond kings and battles, social, cultural, and intellectual histories have changed its contours and configuration.

Thus, as a discipline history has ceases to be a catalogue of success stories of the powerful. It is no longer the saga of the collision of swords and spears but dialectics of ideas, thoughts and ideals. Imam Hussain (peace be upon him) was defeated on the battlefield, but history has vindicated him and not his adversary. How do we explain that conclusion? The imam was fighting for a cause (or the ideal) and his adversary for the sustenance of power.

Tipu Sultan is yet another example. If in the annals of Indian history, someone met the fate of a Greek hero that was Tipu. He lost the battle at Seringapatam but the ideal of freedom that he cherished gathered strength even after his defeat. It is not the success in the physical sense but the ideals that an individual sets for him-/herself to achieve is what perpetuates one’s name in history. The propelling force for the history is the ‘ideal’ and the earnestness in the quest to achieve that ideal.

Somehow the personalities, who aspired to achieve the ‘ideal’ but couldn’t despite the struggle and the sacrifices, have far more traction and acknowledgement in history than many conquerors and emperors.

When I looked into the life histories of people like Socrates, Jesus Christ (peace be upon him), Gautam Buddha and in modern history, Napoleon Bonaparte and Karl Marx, it seemed to me that their lives were not success stories as such.

Socrates was condemned to death for the ‘perversion’ that he was allegedly disseminating among the youth of Athens. But his impact on the history of ideas is far more pervasive than many kings and queens put together.

Buddha renounced worldly power and pelf to pursue his amorphous ideal to attain the nirvana. At the time of his death, he had a handful of devotees. But the ideal that he cherished and disseminated remains alive to this day.

Jesus Christ (peace be upon him) represented the weak, the voiceless, and the outcast, and sought to ameliorate their lot and extend them care and kindness. His firm belief in the truthfulness of his ideal made him willing to sacrifice his life. That turned him into a historical figure. It is for this reason that the Christian creed is one of the most popular in the world.

George Washington and Abraham Lincoln are the two most revered presidents of the United States of America simply because they thought beyond power politics. What brought them a secure niche in the world history are the ideals and their firm belief in the veracity of those ideals.

Karl Marx is unique in some ways. Throughout his life, he struggled with marginal success but because of what he professed, he was one of the most renowned individuals in the human history. Almost half the world in the second half of the 20th century embraced his ideology. The question that arises from what we have so far discussed, is not very easy to answer.

The ideal that Alexander pursued was antithetical to what Diogenes believed and practiced. What kind of ideal does history vindicate and endorse? Obviously imperialism, nazism or fascism, too, were very potent ideals of sorts, pursued by powerful individuals who seemed to have full faith in what they thought and practiced.

The ideals which have greater resonance across the temporal divides, are the ones constituting muted or suppressed aspirations of the majority, living in a certain territory. A close reading of human history may reveal that social afflictions like poverty, disease and emotional stress are made excruciating by the elite when they deny the underprivileged the right to express the agony plaguing their lives.

Prophets, reformers and philosophers vindicated by history usually have their fingers on the pulse of the muted majority. These ‘eternal souls’ give expression to the suppressed aspirations of the people. They also use those aspirations (or feelings) as nuts and bolts for the ideals that they formulate. These formulated ideals secure for them permanence in the annals of history.

Importantly, ideals that are race bound or specific to a certain geography can attract people temporarily, but such ideals don’t have lasting value. That primarily was the reason that fascism and nazism failed to achieve their targeted objectives, and history has condemned these ideologies for their detrimental role in human history.

Lastly, no single ‘universal’ ideal, like Hegel’s absolute idea or world spirit, works at all times. Every epoch has an ideal specific to its own exigencies. Similarly, ideals do vary with spatial difference, too.

We are currently witnessing the dialectical clash between the ideals in Trump’s America. Co-existence of multiple ideals and freedom for their adherents to express them is what, one may aver, history is moving towards. It is not the power or the pelf but the ideals, representing the muted majority across race and geography. The only context that such ideals may have is ‘class’. It is extremely important for Pakistani literati to think on these lines; they should have clear ideals and the freedom to express those. The best thing would be for the ideas to be predicated in terms of ‘class’.

History and the pursuit of ideals 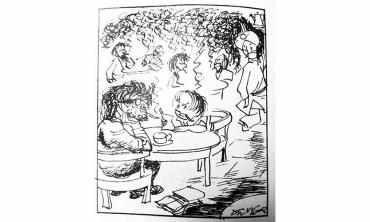 Tea and other ‘addictions’