Coke Studio’s beautiful Hamd, ‘Asma ul Husna’ may have amassed over 6 million views and endless applause in just a week, but there’s a fly in the ointment. Instep investigates.

Our mainstream entertainment industry has a bit of a problem when it comes to originality of visual language and creativity. This is emblematic of a larger scale issue that is prevalent throughout the fashion and entertainment industry as well; from textile brands stealing from artists to Instagram accounts calling out others for nicking their content, the last few years are replete with examples of plagiarism at multiple levels. We struggle with subtlety, with differentiating between copying and taking inspiration and with creating a narrative that is well fleshed out and unique.

In February 2020 a PSL ad, which was completely ripped off from an Indian production that promoted their league right down to dialogues and editing, was aired in anticipation of our own league season kicking off. The fact that it came from the official platform made the gaffe even more embarrassing. How did such blatant piracy elude the director, the agency and the brand? Did they assume that the audience would never pick up on the similarities? The questions remain.

This month Coke Studio, the largest music platform this country has, released a rendition of ‘Asma-ul-Husna’ with Atif Aslam. The video was directed by Asim Raza, the man who brought us Parey Hut Love, Ho Mann Jahan and countless Coca-Cola and Lux commercials. Aslam’s vocals were soulful and stirring; the video however seemed familiar. It seemed familiar because it resembled another video by British Muslim nasheed singer Sami Yusuf. A side by side comparison of the videos, posted on social media by blogger Aamiriat, showed similar lighting, camera shots and even special-effects.

To understand the Coke studio’s video and its conceptualization better, we spoke to the director. Raza explains that the video was shot during lock-down in Lahore since the travel-ban between cities prevented Aslam from making it to Karachi. He states that they had to meet deadlines despite logistical constraints. The video was shot by a skeletal crew of 4-5 people quickly capturing Atif’s performance in a few hours. Raza remotely monitored the shoot: the play back monitor on set was turned towards a laptop with the director on video-call. The footage was then transferred online and Raza edited it himself, wanting the focus to remain on Aslam, who he commends for performing beautifully.

According to Raza, the video was then passed on to the team at Soft Matrix who added the swirling gold dust that coalesced to form the names of Allah on-screen. “Time was limited, resources were limited, everything had to be done in a decent fashion because at the end of the day it was about God,” says Raza, rounding-up the concept and the production process.

What was the inspiration behind the video? According to Raza, there were many inspirations but everything had to be centered on the limitation brought about by the pandemic. “The limitation was the main inspiration. We had to make something very basic but at the same time, because it had to do with the 99 names of God, we wanted it to have the glory associated with them and not have it look like a shoddy job done. The client, the agency and myself, we wanted to create something aesthetically pleasing, the concept brief wasn’t to push the envelope on creativity,” he claims.

This is where our problem begins. Creatives thrive under situations that require them to think outside the box. By choosing something basic, the idea of what could have been was limited before it could even be explored.

Raza further explains that the video is shot on a flat, dark background with a spotlight on Aslam. “It’s nothing new, millions of simple videos have been shot like this. It’s about how Atif performed and his body language that makes it interesting, otherwise there is nothing novel conceptually,” divulges the celebrated ad director. Raza then explains that the use of gold dust is a common technique used to ferry words on and off-screen, employed in movies and has been applied liberally by him previously in his work as well. He adds that it was unfortunate that they didn’t have the time and couldn’t brainstorm a more innovative way of doing the job because of the aforementioned constraints.

On the subject of similarities between his video and the video of Yusuf that it is being compared to, Raza is quick to dismiss any claims of plagiarism. He sounds offended at the idea that his video is riffing on Yusuf’s and points out that the darkened background, spotlight and gold-dust (in this very order) have been featured multiple times, especially in the case of nasheed videos that have to be sober looking and somewhat somber in tone.

To surmise Raza in his own words, he hasn’t plagiarized at all; he’s just used all the same elements in the same combination, with shots to produce an aesthetically appealing video that focuses on Aslam and the names of Allah. The similarities are little too on the nose but okay, we’re willing to take the director’s word for it.

Raza then opines that these critiques are far from valid; they are the mutterings of negative keyboard warriors, with too much time on their hands. He claims that there are those who are still doing things despite the limitations of a pandemic and are trying to produce good content while a segment of the population, comfortable at home, has nothing better to do than to find fault in the works of others. There is an unsaid implication, a jeering question that hides behind his statement: who are they to critique me and what is their body of work that their contentions should even be given space?

Here, you see, is where the heart of the problem lies. Sure, social media has turned everyone into a critic but it is egregious to dismiss all critique as negative, ill-informed or intended out of ill-will. Constructive criticism is essential to growth and quashing down any opinion that begs to differ is a quick road to stagnation. And there is no denying that our mainstream entertainment is a stale salad still tossing about borrowed ingredients.

What makes this entire affair exceptionally disappointing is that these are big names that command big budgets and have lofty reputations as masters of their craft. The explanation of logistics and time constraints just doesn’t hold up in today’s digital world. From shows like SNL that are continuing transmission with videos produced by actors in isolation, to actors like Mark Ruffalo explaining how he finished the entire final voice-over for a commercial film in a hotel room alone, with a makeshift sound studio constructed out of pillows and a down blanket to deaden other sound, innovation is at its peak!

This was a chance to rise above, to do something that Raza and the brand could claim as their own. The audience is smart and social media, for all its vices, has brought the world together and nothing goes unnoticed, least of all inspired content. It is time that Pakistani creatives wake up and ask themselves: is this really the best they can do? 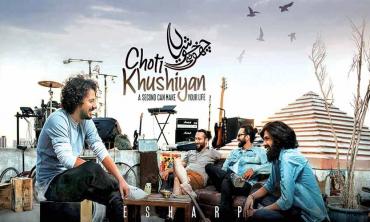