Dr Ajaz Anwar recalls memories of a tonga ride, whose coachman knew Italian and was a World War II veteran

There came a man in uniform resembling that of a rogue policeman, with summons for me. Rogue, because he went knocking at doors around my neighbourhood, Muzaffar Mansions. Soon everyone on Nicholson Road knew who I was.

It so happened that I had managed to keep my soul and mind healthy enough during my long, jobless years by indulging in ‘creative’ activities like cycling 15 miles to Chhoti Dek and back, not to fish but to feed ‘them worms.’ Only on this last occasion, as I hooked a little less than 12 inches kalbons, a man standing behind me smiled and graciously allowed me to land it. Next, he asked for my fishing licence, which I never had. But the Fisheries’ man, who had walked through all those water-logged saline banks of the stream infested with shredded snake-skins, jackals and porcupines, was duty-bound to report to his immediate superior and he to his respective superiors up the ladder that a catch had been found in the landing net and that was me.

I compliantly obliged by giving him my correct postal address. Hence, the summons.

My father, still trying to recover from the unpaid electricity bill episode, was shocked. Never had there been a policeman at our door! Not even my recent appointment at a university would appease him. I had been appointed a lecturer, junior to my three-year juniors. “Go and pay your fine, and don’t let them know you are a government servant now!” he instructed me.

I obediently got a licence made from the Fisheries Department, located on Sanda Road. But I was still required to appear before their officer in Sheikhupura district, they informed me after I had paid the licence fee.

It was a busy routine, under the ferocious Polish/Russian Anna Molka Ahmad. Prof Zulqarnain Haider came to my rescue, and agreed to look after my practical class on the appointed date. I hailed a rickshaw ride to Badami Bagh, from where a bus took me to a tour of the then lush green valleys and I was finally dropped off at Sheikhu Baba’s (as Prince Salim was reverently addressed in his childhood) Fort.

Ignoring the dilapidated fort then occupied by the police, I tried to find my way to the Fisheries’ office which I, as a stranger, could not locate. I had cycled 15 miles every Sunday, in the previous three years, but beyond that it was an unchartered territory. A tongawala came to my rescue, already overloaded. He simply asked me to jump in. (I don’t believe in metaphysics but strange encounters keep me infested.) He had human cargo to be delivered in different latitudes and longitudes. Where he was taking me to, was not clear to me. Trust is a big markup. Soon I found that he was a revered person around town, the suburbs of which had many one-way narrow roads meant only for one tonga at a time. Any incoming tongas would have to get off-road for him. I really wondered as to where the horse was taking us.

Still, I sat composed and confident, enjoying the verdant, unspoiled rural landscape, and thinking of the Fisheries’ office that should be beyond the scenic horizon. It wasn’t so. The coachman took a geometric U-turn after dropping off the last of the payload. Now I was the lone passenger and the horse too had treaded merrily revisiting the already visited John Constable-like landscape. The coachman never wanted to leave a stranger like me wandering. Now he and I were in the front seat, both pretending to be in the driving mode. What followed or what I made out of our conservation was really an exposure to time machine. This man was quite fluent in regional languages. He knew some Italian too. How come? I wondered.

I was surprised to learn that he was a World War II veteran. Among the various battlefields, he had fought on the Italian front, and helped the Allied (or British) win the war.

When I asked him if he was shot at during the skirmishes, or taken prisoner of war, he replied that it was a “very friendly affair.” He also said that the Italians never wanted to put up a fight, they had been dragged into it.

I called to mind Muhammad Ali who once said, “Why should I go and fight Viet Kong? They have not done me any harm.” In fact, his contribution to ending the senseless Vietnam War is significant — he preferred to be stripped of his title than be made part of the killing fields. Of course, he reclaimed his title in the arena in Zaire, in 1975, at the event which I saw at past midnight in a café in Istanbul. His outbursts after the match were dramatic.

Our soldier mentioned cities like Milano, but regretted not being to Roma. Though his Italiano was now fading, he still believed that numbers like “due”, “tre” and “sette” must have come from our languages. Yet, he marvelled as to why they would say “aqua” when I wanted to drink, and said “Pane” whenever I asked for bread to eat.

Our exciting conservation was cut short as we reached the Fisheries’ office. But the coachman was wise enough to convey in Pashto: “salor rupia” for one-way ride. To this I added, “Due rupia” for waiting time. He responded with a “Mille grazie.”

I was able to understand his scant Italian because I had learnt some under my Swiss teacher, Dr Butler (watch this space for a later dispatch on the Missionary at Loyala House, Waris Road) at Oriental College, where Ashfaq Ahmad was my external examiner (the famed writer had taught Urdu in University of Rome), back in 1966-67. Years later, sometime in 1977, when I was admitted to a UNESCO programme on Conservation of Cultural Property, in Rome, I still had a fading memory of that soldier.

The Fisheries’ staff was about to close down, when they spotted the approaching tonga whose veteran driver was waving to them. A court had been set up beside a big ancient water tank in which schools of fish somersaulted in absolute joy during my summary trial. I was warmly welcomed, maybe because it was for the first time that a summoned violator had showed up.

Surprised as they were, the paperwork was done posthaste. My newly acquired licence was much appreciated, and my newly acquired status of a “professor” too was duly respected. Yet, I was politely slapped a fine of Rs20 which I paid, before boarding the carriage that was waiting for me.

About a year later, while returning from a fishing trip from Hiran Minar along with my father, a young man asked me, “Are you Prof Ajaz?” I was amazed at his memory. But my father was not pleased, because during his service with the Rationing Department, he had contributed cartoons for the daily Dawn, which then came out from Delhi, under the pseudonym “Gumnam.”

This dispatch is dedicated to “Sher Ali Afridi”

Note: Free art classes at the House of NANNAs on Sundays. No age bar. Benches are provided. Bring your own lunch

Last Wednesday of the month meeting of Lahore Conservation Society: A visit to Jehangir’s Tomb on January 29 at 2pm. Architect Maqsood Malik will be the host of the ceremonies

Our soldier on the Italian front: A ride in old Lahore with the tongawala who spoke Italian 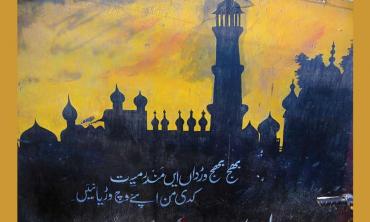 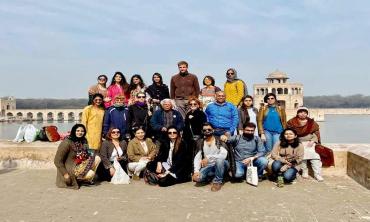 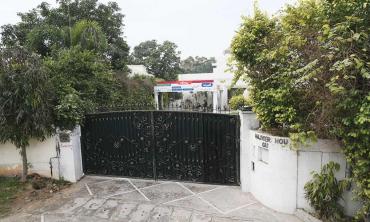