At a time when stupidity is almost an epidemic, the new crop of sexiest, hottest people aren’t the jocks and blonds but those who have something intelligent, passionate and sincere to say.

We’re turning into a new year, but when it comes to overviewing the past decade, we cannot deny the shift in dynamics when it comes to evaluating levels and merits of human hotness. Sex symbols and screen idols, icons and ideals of attraction have evolved ginormously, you’ll have to agree. The era of dumb jocks and proverbial blond women has passed and we’ve witnessed the rise of nerds, most significantly. Okay, very rich Mark Zuckerberg type nerds I’ll admit, but riches come with smartness; the grey and the green is all interconnected. It’s a relief to say that intelligence, wit and kindness is now considered three of a person’s most attractive features; they have thankfully replaced height, weight and waistline. The shift is as evident in popular culture as it is in real life. Intelligence is finally more attractive.

It’s no coincidence that 41-year old John Legend was voted People Magazine’s Sexiest Man of 2019. Because 2019’s man, nay sexiest man, had to be someone woke enough to ban R. Kelly songs from his house; Legend was actually the only major recording artist to give testimony in the documentary, Surviving R. Kelly. He also campaigned relentlessly against poverty and sexual violence. Considered a dork in the most endearing way, this guy tweeted more about his wife than his career; back in 2013 he even sung a song appreciating her curves and edges and perfect imperfections. Who doesn’t want a man like that and luckily, the kind people at People recognized John Legend for more than his cuteness and voted him Sexiest Man of 2019.

Okay, so Jason Momoa, 40, was also voted one of GQ’s hottest Men of the Year for 2019 but as he said in a social media post, “Hopefully it’s because I’m busting my ass trying to stop single use plastics and kicking up dust trying to stop a telescope getting built on our sacred mountain in Hawaii. Regardless, I look up to a lot of different people and if I have any impact on anyone like they do on me then it’s to be an activist, to do right with our voices, follow our hearts. I got a lot of work to do. We all do.”

Fortunately, one of the most stereotypical and stifling beauty pageants of all time, the Miss Universe bandwagon, also shifted gears last year. 26 year old Zozibini Tunzi from South Africa was the first black girl to win since 2008. The message she sent out was of power, determination and equality for women. In her final question, Zozibini was asked what we should be teaching young girls today and her answer was leadership.

“It’s something that has been lacking in young girls and women for a very long time - not because we don’t want to, but because of what society has labelled women to be,” she said.

“I think we are the most powerful beings on the world, and that we should be given every opportunity. And that is what we should be teaching these young girls - to take up space.”

Fortunately, several stars and celebrities in Pakistan did rise to prominence for more than their dramatic value and/or their early morning selfies. These few (and there really are just a few) names need to be acknowledged and appreciated as Pakistan’s hottest stars, not for their social media numbers or sartorial choices but for their choice of words, what they say, how they influence people and the causes they stand by, irrespective of consequences.

When it came to films, the past decade saw Pakistan struggling to keep its head above water. That said there were a few films that stood out in a sea of rom-com stupidity, Manto being one. Directed and performed by Sarmad Khoosat, it set the bar very high for filmmaking. That’s not all, more recently Sarmad also co-created Akhri Station, a 7 part miniseries unraveling personal journeys of several struggling women as they took a train ride together. It was sensitive story telling by a man who then did the unprecedented by depicting a death row victim’s crumbling state in the last 24-hours of his life; No Time to Sleep was a chilling live performance.

It’s not just his work that makes Sarmad such a magnet though; it’s the fact that he can sit and gently talk about any subject under the sun without histrionics or aggressive interludes. He’s that calm and intense friend who will convince you that reading the right poetry will avert the apocalypse. Well-read and well-spoken, Sarmad is connoisseur of art and literature; he never misses a festival. He’s also the man that gave us Humsafar and the Fawad-Mahira chemistry, further proving that he’s a romantic at heart. These are just some reasons why we’re looking forward to his upcoming film, Zindagi Tamasha. At a time when stupidity is an epidemic, Sarmad rises as a cerebral vaccine. Hottest man of the moment: let’s just give him the award already!

Mahira Khan emerged as one of the strongest voices of women empowerment in 2019. After a rough post-Raees chapter in her life, 2019 came as a relief with two hit films, Superstar and Parey Hut Love, the latter in which Mahira had a small but significant role. She rolled into one leadership role after the other, from walking with global female icons at Paris Fashion Week to being appointed the UNHCR Goodwill Ambassador for Pakistan; Mahira kept inspiring girls all over. She also made sure she tweeted every time there was something to say, which was quite often. She commented on the devastation caused by Australian Bush Fires and she tweeted to the government on the bill being passed against child sex offenders. Mahira consistently raised funds for SKMH and on December 25 she tweeted the Quaid’s speeches focusing on freedom for minorities and power to women. In an interview with BBC Asian Network, she expressed that she was “older and more comfortable in my skin,” speaking of the ups and downs of life with equal ease. Very real, sincere and very influential, Mahira certainly tops this list.

The past decade really did mark the rise of the nerd, living proof being Jibran Nasir. The man rose to prominence in 2014 and the APS massacre in Peshawer; he was one of the few people brave enough to campaign against Molvi Abdul Aziz, the Lal Masjid cleric. Lawyer by profession, Jibran provided legal counsel for stab victim Khadijah Siddiqui and feudal row victim, Shahzeb Khan. While his civil right activism keeps him in the news (his support for the Pashtun Tahafuz Movement being loudest) he’s cooler still for his feminist views.

“We’ve spent decades producing films/dramas which either vilify women or showed them as inferior to men,” he recently tweeted. “Entertainment media has the power to shape societal values. We need role models & survivors not ‘ibrat ke nishaans’. When you can reach millions, have the right message.”

Here, here… we couldn’t have said it better and therefore we loved it when we saw Jibran’s opinions transition just as easily into show biz; he is an #influencer we would happily bank on. An excellent cook and dance floor enthusiast, he recently got engaged to Laal Kabootar star Mansha Pasha, pulling him into the show biz realm even more. Let’s hope he can use his influence to make some intelligent changes.

Shaniera Akram rose to Pakistan’s mass consciousness in 2013, when she married Wasim Akram but since then she has more than effortlessly carved an identity for herself, which she wittily pointed out to columnist Nadeem Farooq Paracha, who repeatedly referred to her as ‘Wasim Akram’s wife’ at a literature conference. No sir, Shaniera Akram has an identity and it’s one Pakistan has grown to love and respect. If possible, the country would elect her First Lady in a heartbeat.

And here’s why: Shaniera has made the country’s problems her own, taking ownership of the beach-clean drive, child health and that’s just a start. Last year Shaniera was appointed Ambassador for The Fred Hollows Foundation, which provides comprehensive Eye Care for Female Agriculture and Cottage Industry Workers. Needless to say, her active association helps raise funds.

She’s got the influence to be heard and she uses her voice responsibly. Over the years, when people have pointed her out as a foreigner, she has corrected them and taken ownership of being married to the place she lives in.

“I was born and bred an Australian but I have come to live my life for and with the people of Pakistan. Pakistan has been good to me and plays a big part of who I am today. I love Australia and always will but I am with Pakistan all the way. Pakistan ZINDABAD,” she tweeted.

It’s not just lip service. One has seen and met Shaniera enough times to be completely convinced of her sincerity when it comes to the causes she supports. She’s a role model that redefines the stereotype of what makes one hot.

Osman, also known as OKB, emerged to mass consciousness more than a decade ago in a combination of theatre, TV and film gigs. Most of the country’s online population (it wasn’t such an epidemic back then) loved him for his YouTube channel, The Living Picture; those in Islamabad caught him on stage and popularized him as Pakistan’s Orlando Bloom lookalike and movie goers saw him debut in Zibakhana. Nutshell: OKB has come a long way. But it’s not his looks nor his shirtless gym pictures (there are none), his prominent projects and performances or his impressive dance moves (there are none) that have caught attention and cast him in this list of sexiest Pakistani people today. It’s the fact that Osman is totally woke and has never hesitated to express his thoughts. He’s well-read and has a witty albeit intellectual opinion on things; you’ll admit that is an extremely rare combination. He’s commented on most things that most men prefer to stay quiet about: women’s rights and feminism, repression in Indian Occupied Kashmir and now India altogether; he defended Mahira Khan against Firdous Jamal’s ageist comments and whenever the Twitter trolls turn against him (which is often), he’ll respond with an absolute chill. Unperturbed and with witty punch. Just the way we like it. 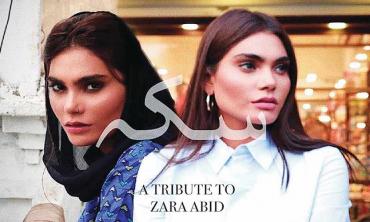 In loving memory of Zara Abid