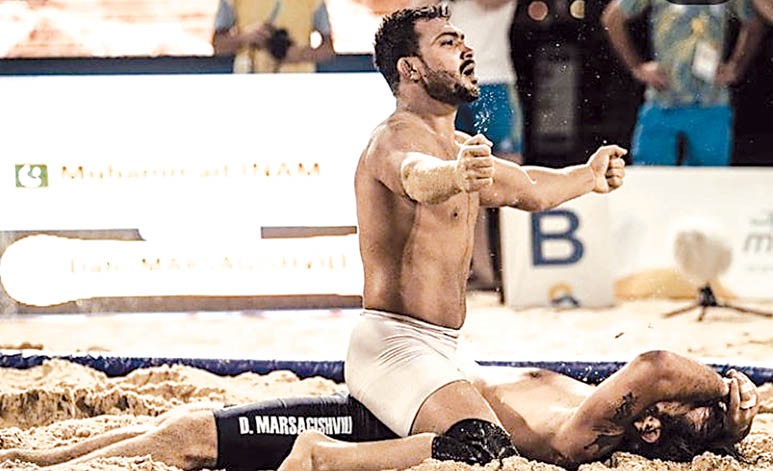 It’s the stars who light up a sporting event and the National Games, getting underway in Peshawar today, are no exception. The world of Pakistan might not be as blessed with heroes as it was, may be three or four decades ago, but there are many athletes who will be worth following during the event. TNS singles out five top athletes who will be the biggest stars at the National Games.

Leading the list is Pakistan’s premier wrestler Mohammad Inam. The Gujranwala-born grappler has immense potential and has been winning medals in international circuit. Inam is the national champion and is sure to lift National Games gold in Peshawar. He is one of the prolific players of Pakistan, having won two Commonwealth Games gold medals and two World Beach Championships titles. Inam recently won gold in the inaugural World Beach Games in Doha in 90 kilogramme weight category.

The other player who will be worth watching is the experienced karateka Saadi Abbas. The Dubai-based two-time Commonwealth Championship gold medallist, who plays for WAPDA, is expected to pull off gold in 75 kg with ease. The former Asian champion and US Open gold medallist is in great form. He has been featuring in the Olympics qualifiers and is expected to earn an Olympic seat. His Olympic ranking is 19th. He belongs to Karachi’s sports hub Lyari which has produced great players in various disciplines over the years.

This will be the fourth National Games for Saadi. In the previous three editions, held in 2007, 2010 and 2012, Saadi grabbed double golds. "This time too I will win double gold," Saadi told "The News on Sunday (TNS)" from Peshawar.

It will also be interesting to witness the country’s terrific javelin thrower Arshad Nadeem showing his guts in National Games.

Mian Channu-born Arshad brought Pakistan back in the limelight after several years when he bagged bronze medal in the 18th Asian Games held in Indonesia last year.

Arshad, who represents WAPDA, also remained World No3 in the IAAF Under-20 rankings when he secured bronze in the 12th South Asian Games in India in 2016. In the World Athletics Championships in Doha last month, Arshad recorded an 81.52 metre throw which set a new national record. His Asian Games bronze winning throw was 80.75metre.

Olympian judoka Shah Hussain will also attract attention during the biennial spectacle in Peshawar. The Tokyo-based two-time Asian bronze medallist and 2014 Glasgow Commonwealth Games silver medallist will compete in minus 100 kilogramme competitions in Abbottabad. He is Pakistan’s top seed and should not face any trouble in winning gold.

Shah is the only judoka of Pakistan who has competed at Olympics -- in the 2016 Rio Olympics.

Again he is on the way to earn an Olympics seat as he has risen to the 42nd spot in Olympics ranking.

Nargis Hameedullah is another fine karateka who will be worth watching. She surprised everyone with her stunning bronze-winning show in the 18th Asian Games in Indonesia last year.

Nargis belongs to Hazara tribe of Balochistan and will be making her National Games debut in Peshawar.

She is expected to win gold with an enviable ease in the Games which were earlier scheduled to be hosted by her hometown Quetta but were shifted to Peshawar due to certain issues.

Some foreign-based taekwondo fighters, including Nimra Wasiq and Aneela and one from Australia were also expected to turn up for National Games. They stayed back when National Games were rescheduled last month.

"They were surely part of the National Games as they had confirmed their tickets but decided against coming to Peshawar when the Games were postponed. They are now busy in their examinations," a senior official of Pakistan Taekwondo Federation (PTF) told TNS.