Pakistan, the top-ranked team in T20Is, are now just one point above the rampaging Aussies 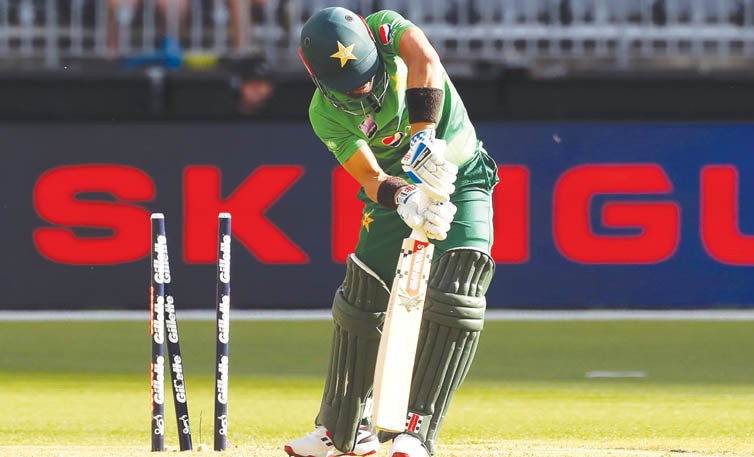 Pakistan started the Australian tour with another series defeat. It was the second consecutive T20 series defeat under new head coach Misbah-ul-Haq after the defeat at the hands of Sri Lanka at home.

It was Babar Azam’s first assignment as skipper in the shortest format and he failed miserably as the Green-shirts lost the T20 series by 0-2 against Australia.

Pakistan failed on both fronts. Neither did batsmen manage to set defendable targets, nor were the bowlers able to restrict the Aussie batsmen.

The way Pakistan surrendered in Australia was hugely disappointing. Twenty20 is the most viewed format of cricket because of high scoring in a limited time. But Pakistani batsmen played in these matches as if they were playing Tests. In the third T20I, our batsmen played 61 dot balls, more than 50 percent. With such batting performance, how can they hope to beat one of the top sides in the world?

Australian cricket team remained unbeaten in the shortest format of the game in 2019. During the year, the Aussies played eight T20Is and won seven. A match against Pakistan ended without any result. Their win against Pakistan was the third consecutive T20I series victory.

With this consistent performance, Australia are the favourites for the next year’s Twenty20 World Cup that will be held in Australia.

In 2019, Australian opener David Warner scored 287 runs in six T20Is and was dismissed only once, which gave him the extraordinary average of 287.

Despite losing the series, Pakistan retained their top position in the ICC T20I team rankings, albeit by only one point. Pakistan have 270 points, while Australia have 269.

Skipper Babar’s individual performance was great. He proved that he is the number one batsman in the shortest format of the game. He scored 115 runs in the series, including two fifties, averaging 57.50, with a strike rate of 138.55.

Besides Babar, only middle-order batsman Iftikhar Ahmed played some positive cricket, especially in the final overs. In the last two T20Is, he scored 108 runs off 72 deliveries with a strike rate of 150. He was dismissed once in the series. With more experience, he could be the next Shahid Afridi in the lower middle order for Pakistan.

All the other batsmen failed. Opener Fakhar Zaman continued his poor form. In 2019, Fakhar played eight T20Is and scored only 50 runs at an average of just 6.25 runs. His highest score was 17 against South Africa at Centurion in February. Only twice did he reach double figure.

The management must consider his role in T20 format. Fakhar’s performance has been much better in ODIs, though. In 20 ODIs this year, he scored 683 runs, averaging 34.15, with one hundred and five fifties.

Asif Ali has also been failing. He is rated as a hard-hitting batsman in the middle-order, but has rarely proved it. During the series, he scored only 15 runs in the two matches he played. Even his strike rate was just 100. After playing 25 T20Is, Asif has only 331 runs. He hasn’t scored a single fifty. His highest score is 41 against Zimbabwe. His average is just 18.38.

Haris Sohail is a good middle player, but he also failed on Australian pitches. He scored only 18 runs in three matches with a high score of 8 runs, averaging just 6.

Despite his failure in the third Twenty20, Babar was the top scorer of the series with 115 runs.

Australian skipper Aaron Finch was the highest run-getter for Australia with 106 runs with one fifty, averaging 106, and strike rate of over 160.

With the overall performance in the T20 series, head coach Misbah must be a worried man ahead of the Test series starting from the next week. Australia are a much stronger side in the longest version of the game, especially on their soil.

It will be a tough task for Test captain Azhar Ali. He has a good combination of quality batsmen like Asad Shafiq, Babar Azam, Haris Sohail, and Shah Maood along with fast bowlers Muhammad Abbas, Imran Khan, and Shaheen Afridi and leg-spinner Yasir Shah. The Aussies are not unbeatable. If Azhar leads his boys to victory, he will become a hero.