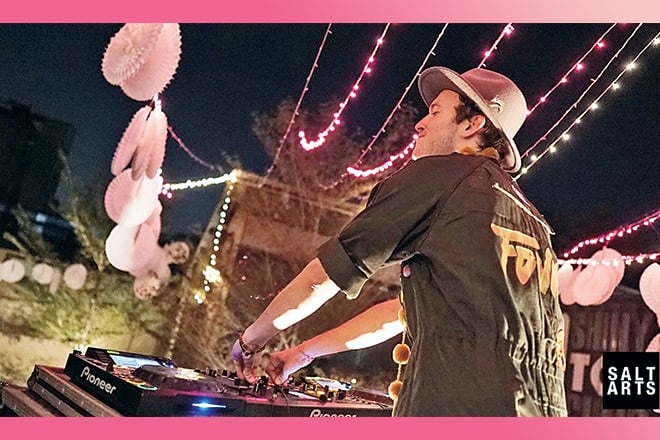 FDVM, which stands for the initials of Florent Denecker & Victorien Mulliez, first came to Pakistan as part of opening their Southasia tour that would also take them to India.

During their visit, they played a show with Salt Arts in Karachi; Solis Arts and Music Festival (minus its Karachi edition that hadn’t happened then) and closed the tour with a performance at Lahooti Melo 2019.

But prior to this tour, Victorien Mulliez had come to Pakistan and visited the shrine of Bhit Shah in Sindh and went to a village with Saif Samejo. As he later told Instep, the visit told him that no Caucasian had ever visited the village before.

At Lahooti Melo 2019, for an international act, they had absolutely zero attitude or approachability issues. Talking to the press is one thing, but Victorien, colloquially having become Vic, was actually outside the backstage area and letting fans take pictures with him and was wearing an ajrak for the duration of his Sindh stay.

Their mission - the only one - is to spread smiles and they do it through their music and the attitude they carry. The music is house music but within it, they blend so many subgenres that it is hard to categorise. What is palpable is that it is not obscure music that only a few will find palatable. It has global appeal.

Though they have played a show in the three major cities of Pakistan - Karachi, Lahore and Islamabad – as well as at the quiet and lovely Jamshoro, FDVM is returning to Pakistan this month and will be playing the Solis Music and Arts Festival, this time in Karachi on November 16.

Victorien Mulliez also played a private show prior to these pubic gigs.

Since heading back, and playing at other spaces, FDVM released a single called ‘Spread the Vibe’ feat. Ezee with a music video that carried the narrative of their tour of Pakistan. Hanging out in a rickshaw, outside landmarks like Minar-e-Pakistan, among other things, the music video is a genuine love letter to Pakistan and an effort to showcase the people.

"This video will significantly help to portray the soft image of Pakistan and further amplify the narrative of peace, love and celebration. More importantly, it will encourage foreign travelers to visit Pakistan, promote tourism and consequently, will have a positive impact on the local economy," FDVM had said on the occasion of its release.

When it was confirmed that they are returning for Solis, Instep spoke to Victorien Mulliez – who revealed that they have just released an audio version of Nazia Hassan’s ‘Disco Deewane (edit)’ which is their tribute to the late artist. Point, FDVM.

Listen to the song (on SoundCloud) and you realize that they have kept the sanctity of Nazia Hassan’s voice intact even as they have added elements of beats layered within the song. It’s quite exquisite. Because they did not take a Nazia Hassan song and butcher it, knowing just how special the late artist still is to Pakistani music and fans.

Speaking to Instep earlier this month about their set at the upcoming edition of Solis and what we should expect it to be like, Victorien noted, "It’s our third time playing Solis Festival, each time we came with a new surprise, first our ‘Tribute Edit of Disco Deewane’ (which is now available on our Soundcloud), then with our ‘Edit of Bibi Sherene’. This time we are going bigger with an even more powerful set and very very special surprises. We cannot say much about it obviously but all we can say it’s that it’s not an edit this time."

When asked if FDVM is looking forward to playing in Karachi to a huge audience as Solis will attract a large crowd, Vic noted, "Yes, 1000 per cent! We are so excited! The only public show we played in Karachi was last year with Salt Arts and it was sold out after a week. We are so looking forward to connect with the Karachi crowd (and beyond, as we heard people are flying from across Pakistan).

Last Solis event had reports of misbehaviour of severe nature such as harassment of women by men. As artists, does that concern FDVM and what precautions do you think should be taken at such large concerts?

"We are deeply concerned about these issues," began Vic and continued, "And very sorry to hear about it. As we communicated after Lahore, we trust that the Solis organisation is doing the best in their abilities to take actions and precautions to avoid this behaviors (for this Karachi edition, they have set up a ladies only section)."

Coming back to the music, FDVM’s music has found an audience in Pakistan. But will they be playing remixes or original stuff?

Noted Vic, "We will be playing both as well as new original songs that we never released."

On a parting note, when asked about the rest of FDVM’s Southasia tour like beyond Pakistan, he told Instep, "It was really great, but it was nothing like Pakistan!"