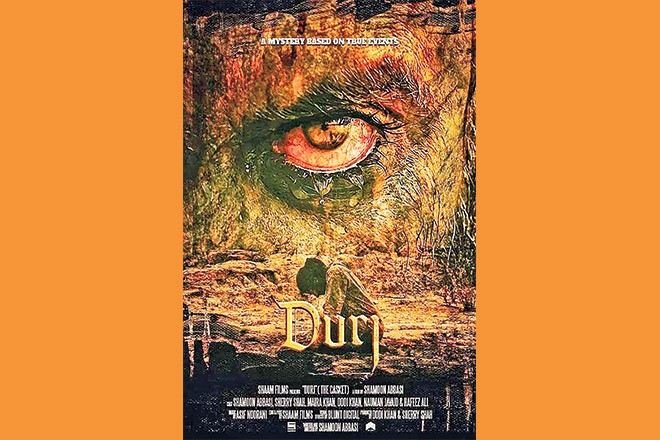 Written and directed by Shamoon Abbasi

Shamoon Abbasi’s Durj finally saw the light of the day after being banned and unceremoniously censored for reasons better known to the authorities. Even then, the writer/director was able to captivate his audience with a story that was not just inspired by true events but was also terrifying. Yes, it comes out as haphazard at some points, with some actors not giving it their 100 per cent, but with Shamoon Abbasi and Sherry Shah on top of their game, everything else fizzles out as a secondary concern.

Durj tackles the phenomenon of cannibalism, which has been reported all over the world but in this case is inspired by stories uncovered in Pakistan. The way the film has been executed might not be perfect but it is much better than other films being screened in Pakistan.

It revolves around a psychiatrist (Maira Khan) who believes her husband is missing until she abducts Gul Bakhsh (Shamoon Abbasi) from police custody, and her opinion on her husband’s disappearance changes to fears that he may be ‘dead and devoured’. She tortures Gul Bakhsh for answers, only to realize that her husband might be one of the many he may have killed to extinguish his hunger. In this cat and mouse chase, the police, on the hunt for the psychiatrist, want answers from the one man who seems to have them.

The film’s highlight is the transformations and the dynamic performances from Shamoon Abbasi and Sherry Shah. Shamoon is an experienced campaigner here and it shows in his acting, his direction and even his writing. He has worked hard on his appearance including shaving his head and wearing disheveled clothes. However, the surprise package is Sherry Shah who makes a comeback to films after she last appeared in a film more than a dozen years ago; she doesn’t disappoint. She let go of her impressive hair just so she could portray Laali perfectly, whereas gained weight to give the character some authenticity.

The film got into trouble at the Censors in the Federal Capital and that’s why some scenes in which the characters were shown to indulge in the horrific feat were censored. You will get the answers regarding why they turn to cannibalism while watching the film and the reason isn’t as unrealistic or farfetched as it may seem. A full director’s cut, which may be released soon online, will certainly do justice to the film.

Written and directed by Khalil Ur Rehman Qamar

Khalil Ur Rehman Qamar’s Kaaf Kangana comes across as a childish version of Hassan Askari’s Tere Pyar Mein that released nearly 20 years ago. The Shaan-Zara Sheikh starrer had a polished story that would seem current even today, but Kaaf Kangana looks like a film made on a script which was never revised after the first draft. Had it been released in the nineties, it may have done well because back then everything was acceptable.

In 2019, it invoked waves of laughter even when the scene was supposed to be dramatic – and the sooner the writer, director, producer, and lyricist of the film realizes that he has let his audience down – the better.

Kaaf Kangana revolves around Ali Mustafa (Sami Khan) and Kangana (Eshal Fayyaz) who meet during the latter’s official trip to Pakistan, after which he follows her back when she returns. When in India, Ali Mustafa is shot, slapped, punched, kicked and put in jail but he realizes that his life is nothing without Kangana, and he tries to win her by hook or crook. His ruffian friend Tony (Aabi Khan) follows him to India and while Ali Mustafa wants to promote peace, Tony wants to get it done through force. Do they succeed in their mission or do they fail, that’s for you to find out.

On paper, Kaaf Kangana looks like an A Grade project that would have made both Indians and Pakistanis fall in love. However, it is so poorly executed that it comes off as an embarrassment and one saw several walking out in disappointment. The dialogues needlessly involved Kashmir (the Kaaf in the title) and were so loud that had they been delivered in reality, they might have been heard in both India and Pakistan.

Every actor barring Sami Khan and Ayesha Omar went overboard while delivering dialogues, and the background score supported them (and scared the audience) with its unwanted presence.

On the contrary, the soundtrack of the film composed jointly by Sahir Ali Bagga and Naveed Nashad was first class but after watching the videos of these songs, the audience might reconsider the same.

The film suffered from bad direction and it appeared as if the writer, who has been churning quality scripts since the nineties had no clue what a director does. The attention to detail was missing completely.

A person who rides a bicycle at night drives a car in the day, Ali Mustafa is unnecessarily addressed and referred to as ‘Ali Mustafa’ even though there is no other Ali on both sides of the border. Last but definitely not the least, the much-talked about item number was inserted smartly but was executed like a nineties song with instructions of copying Bollywood moves from the same era.

Had Khalil Ur Rehman Qamar trusted someone else with his script, he would have first made him rewrite it, and then executed it in a way that the audience would have come to the cinemas to watch the film, not laugh at it.