"Lahore has been my city ever since" -- VI

Painter and conservationist Dr Ajaz Anwar has dedicated this dispatch "to Prof Taufiq Ejaz, my teacher at Alhamra’s evening art classes who told me to work with both hands while sculpting in clay" 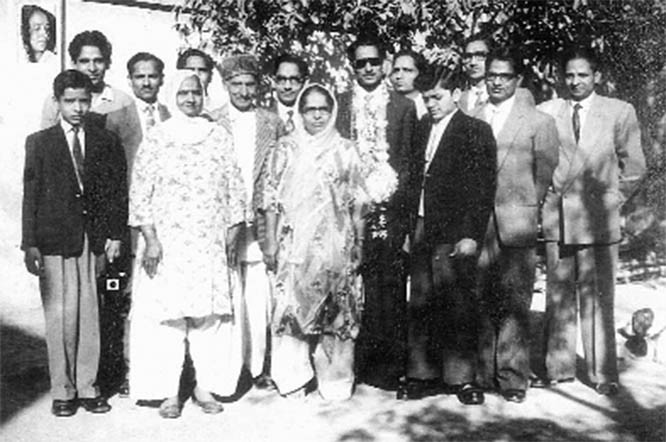 After attending the funeral of my paternal aunt, I sat down at a grave nearby -- that of her husband, my second eldest paternal uncle, Akhtar Ali. I told the gathering how he used to take me around on his bicycle. He, then a bachelor, had a lot of time for me.

In the Lahore of the early years of Independence, there were many statues in public places. In Ludhiana Ki Diary, written by a school master, it is recorded that the boys of Field Ganj had chased away the armed hooligans. In the ensuing battle, many had suffered injuries and this uncle of mine had pellet-gun wounds in his leg.

At the time of partition, all government servants were given the option to migrate to their place of liking, and my grandfather, a postal clerk, opted for Pakistan, and was told to report in Mianwali. Thus, all breadwinners were sent away. Those in the forces too, were posted at various fronts, even though the war had concluded quite some time back. These two factors impacted the bloody events. My father, Anwar, formerly a clerk in the rationing department, had just got his dream job as a cartoonist in the newly established Pakistan Times, which started from Lahore in February, 1947.

My grandfather had ten sons. All of them were college educated. He told his eldest son -- my father -- to go to Ludhiana and fetch his siblings. Amid riots, my father, aged only 24 at that time, went to his native town. What followed is recorded in his autobiography in Punjabi, Gwachiaan Galaan. Col (retd) Faiz Ahmad Faiz, then chief editor of Pakistan Times, also left for East Punjab on a military(?) truck to report about the unfortunate events. Ultimately, he reached our ancestral house, only to find it already vacated as we had departed by then. He, however, got himself photographed against the house and the truck. This picture was a most prized possession in our family.

My late uncle Ashfaq narrated how my father had given two rupees and a Lahore address written on a piece of paper to each one and instructed them to sneak into any bogey of the evacuating train; should they lose contact, upon arrival in Lahore, hire a tonga to get to the given address. Ashfaq and my aunt managed to get into an overcrowded place where our neighbour Boota said, "Waheeda, don’t worry, here I am…" While the train had been threatened intermittently and attacked on the way, upon crossing the Attari Burj, everyone yelled in unison, "Pakistan zindabad!"

My other uncle Ashraf who was in Lahore, much traumatised by witnessing and hearing of killings, was thrilled to receive us all safe and sound. Uncle Akhtar too, was happy to disembark, limping on one leg.

Of all the outings that my uncle Akhtar took me to, I most fondly remember Malka da Butt; though, according to the Omnibus announcement it was Charing Cross. Perched over a small saddle with footrests specially fixed for me, I could imagine myself in the driving seat and my uncle a pillion rider. Lahore of those days had many life-size and larger statues placed at various sites for the public to visualise history, good or bad. In 1951, all were removed in a state of frenzy by the ones who had opposed the creation of Pakistan, with the exception of Alfred Woolner, in front of the University of the Punjab. The Queen’s statue was part of a larger landscape setting. Placed under a marble pavilion capped by a marble bulbous dome was the last addition to Lahore in Badshahi-Masjid style. It was designed by Bhai Ram Singh, deputy principal of the Mayo School of Arts. With the Queen in sitting posture it faced the old Ferozepur Road which consequently was renamed Queen’s Road. The statue was cast in bronze by B Mckennel in London, 1900 (ref. FS Aijazuddin). This and others were cast in lost-wax technique that still has not been improved upon. It is thought to be a Chinese invention, but the Dancing Girl of Indus Valley, also in bronze, is older than Shang and Chou period bronzes.

This landscape setting was disturbed by the Summit Minar, and the trees, although low in height, were all felled to clear the view. It was under these trees that garsons and cooks with their dynmo-fitted lady bicycles waited for desi sahibs for employment. They would show certificates from white sahibs. (For further reference read Bapsi Sidhwa’s Ice-Candy-Man and Ghulam Abbas’s Overcoat.) The Queen’s statue should have stayed in situ to remind us of our colonial past. During Zia’s time, a symbolic replica of the Holy Quran was placed under the empty canopy, which is a sacrilege.

I faintly remember a statue in front of Neela Gumbad, King Edward, and the Ewing Hall. It was nicknamed Babay da Butt; it was that of King Edward VII. Sir Ganga Ram’s statue was installed between the Lahore Museum and Tollinton Market. It was a central theme in Manto’s short story where the protesters demanding its removal are provided first-aid in his hospital. As for Sir Ganga Ram’s statue, it lay in the Mayo School for many years till it was taken away by his granddaughter, my seniors tell me. Lord Lawrence’s was installed near the Chief Court (as it was called those days), serving a vast territory from Delhi to Peshawar. While his cruel offer to ‘be ruled by sword or pen’ remained controversial due to the script at its pedestal. This statue was removed to the Lahore Fort on August 25, 1951.

BC Sanyal, who died some years back, aged 102, vice-principal of Mayo School, and my father’s mentor, was also a sculptor. He had sculpted a statue of Sir Chhotu Ram, after hard bargaining with the Jats of his tribe. They took it away at the time of partition, it is believed.

By the time I grew up, my second eldest uncle, already married, had his own set of children to take around Lahore on his Bianchi motorcycle. But I am sure he did not have much left to show and to see, especially in terms of sculptures. I, however, cycling around chanced upon Lord Mayo’s bust in the porch of the hospital named after him. I had always wondered why his head was cut off. Years later, when I learnt that this most powerful ruler of this colonised land of ours was assassinated by a disgruntled Pathan serving his sentence in Andaman Islands (Black Waters), my curiosity subsided. Diyal Singh’s bust could be seen in the porch of his library till some years back; later, it disappeared mysteriously, without a trace. The Diyal Singh Majithia Hall on Empress Road that served as a student hostel has been converted into Haji Camp, surrounded by the largest second-hand clothes market. The vast playground of the hostel too has been converted into a private college for girls and named after a revered lady, thus sanitised.

Prof Saeed Akhtar, though, he never met Jinnah in person, has painted the latter’s portraits numerous times. These portraits appeared on coins and in relief. Yet, a life-size statue of the Father of the Nation is yet to appear. Ataturk’s statues appear everywhere in Turkey, made by a grateful nation. Jinnah’s statues remain a distant dream. Some breakthrough seems to have been made, as crude reliefs of Iqbal and Fatima Jinnah’s portraits can be seen in front of the Alhamra building. Inside, you find an under-life-size, seated sculpture of Iqbal, and another one that represents any artist -- bhooka, nanga (poor and miserable).

Talat Dabir’s simplified figures rendered in chips and white cement are appropriate. The Ghora Chowk figures of horses, multi-produced and installed in various locations have a commercial look. Ajaibat-i-Sung that operated from Mozang Chungi has wound up since long, but they would produce only various deities for worship. The Ravi Road marble sculptors too are gone. Unsar’s (a graduate of NCA) life-size figures of soldiers installed in Cantonment were smashed before they could register in public memory. Prof Mohammad Asif’s depictions of various animals in fibre glass, placed outside Victoria Gate of the Zoological Gardens, prepare the visitors for the animal world (which is more regulated than that of the homo-sapiens).

"Lahore has been my city ever since" -- VI