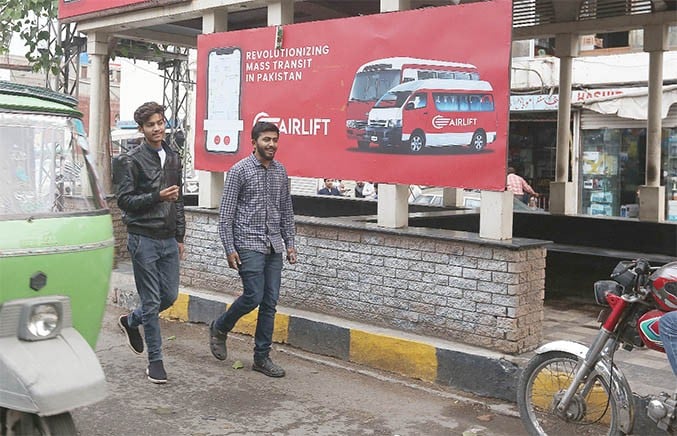 If there is one thing a common Lahori hates doing, it is commuting in public transport. Travelling to workplace or school/college is a hassle, and more: firstly, because of the wait at the bus stops; and secondly, as one rarely reaches one’s destination on time.

But the Smart Ride applications (apps) look poised to change the way we commute. Enter Airlift and Swvl. These clean and tidy vans, plying on the roads, cannot be missed. They are the fresh entrants in the public transport sector in Lahore.

These ‘smart buses’ (so to say) make for safer rides, as they travel only on specified routes with designated stops, and especially because the rides can be tracked and shared with friends/family members.

It also saves time for the customers who are able to get (almost) real-time information about the arrival/departure of the buses, on their smartphones.

It’s also cost-effective. Besides, booking a ride is just a matter of a few clicks on the specific smartphone apps. All you need to do is download the app(s), book your ride, hop on, and reach your destination.

No wonder Airlift and Swvl are becoming the preferred ride for students, especially female students, as well as office-goers and housewives who might need to step out.

Airlift is a Pakistani brand -- hence, their slogan: "Made by Pakistan, Made for Pakistan." Currently the service is available in Lahore and Karachi only, but the company plans to expand. It is the brainchild of Usman Gul, a young Pakistani who worked at DoorDash headquarters -- a company that delivers food to the doorsteps of its clients from an eatery of their choice -- in San Francisco, USA. Upon his return to Pakistan, he joined hands with a bunch of Lums students, who are all business graduates, to found Airlift.

Executive director at Airlift, Syed Mehr Haider tells TNS, "It’s been just a few months since we started our services, and Airlift has already secured $12 million in Series-A financing. We focus on the 70 percent of the commuter market that can’t afford high-end transport facility, or risk their safety in public transport."

He insists that "women’s safety is our major concern. After all, forty-seven percent of our riders are females."

Syed Mehr Haider speaks of "trying to change lifestyles, and eventually impacting air pollution levels in the city. For every vehicle carrying a number of commuters, 10 or so cars will stay off the road!"

The bus drivers are properly vetted by the company before employment, and a helpline ensures action on customers’ complaints within 24 to 48 hours maximum.

Haider also speaks of "trying to change lifestyles, and eventually impacting air pollution levels in the city. For every vehicle carrying a number of commuters, 10 or so cars will stay off the road!"

Presently, Airlift’s mode of payment is through a charge card.

Swvl is another Smart Ride Service that is out to give Airlift some tough competition. A Cairo (Egypt) based transport network that is now tapping into Pakistan’s market, Swvl aims to fill the gap that exists between private cab companies and public transport in the country. Its stated mission is that everyone deserves an affordable, reliable, and convenient transport. The good news is that Swvl offers super low prices!

Shahzeb Memon, General Manager, Swvl Pakistan, says, "We believe we are enabling the common man to get to places, by bridging the gaps, whether figuratively or literally, in time. We are also creating opportunities for jobs in far-off areas.

"Our customers are a mix of students and office-going people -- old and young," he adds.

Plans are afoot to open an offshore support office in Lahore and create 10,000 jobs in Pakistan over the next five years. "The goal is to mobilise half a million Pakistanis by 2023!"

Anwar Abbas, a college student who now frequently uses Airlift, is of the view that booking a ride may be easy but "you need to book in advance -- during peak hours, it’s hard to find a seat. You get a reminder 15 minutes before the van’s arrival time."

Talking about the ride, he says, "The vans are quite clean, and the seats comfortable. The best part is that everyone gets to be seated, unlike in a public transport bus. For all its features, the rides don’t cost much. The fares are cheaper than if you were to hail a Careem or Uber ride."

Mahrukh Chaudary, a working lady from Bahria Town, says Airlift is the "occasionally behind schedule, and it’s hard to get hold of the bus." She suggests that in case a customer missed a bus because of the lag or delay, the company should refund the fare.

In today’s world, data breach is a growing concern, especially among users of the many smartphone apps. Sometime back, Careem announced that some of its data had been breached, which raised many eyebrows. No wonder when new ride apps are introduced, the need to ensure the security of their subscribers’ data is of paramount import.

Cofounder of Women’s Advancement Hub (WAH) Aisha Sarwari says, "We know that companies have limited cyber security protections, even when they invest heavily in it. Hackers are always a step ahead!"

For women who want to be economically independent, mobility is essential. Smartphone apps that give them access to safe and fast means of transport can help them earn more and become more empowered. These apps can also cause them worry for the safety of their data. To quote Sarwari, "The onus is on the companies to ensure that their data is treated as carefully as capital by building encryptions and checks, and to investigate leaks."

When you hit the road