Another step towards madrassah reforms 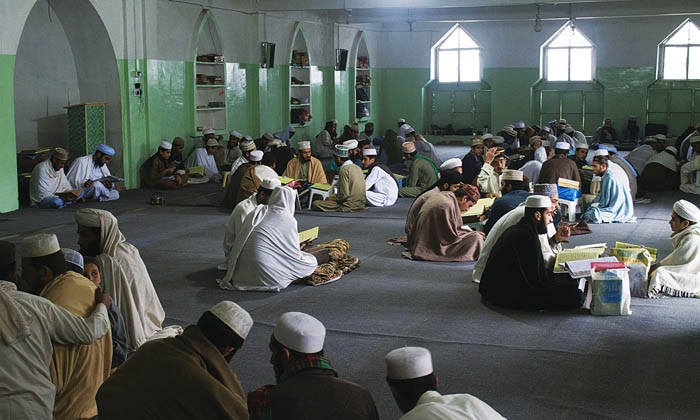 On August 29, the government signed an agreement with the Ittehad-i-Tanzimat-i-Madaris-i-Pakistan (ITMP), the umbrella organisation consisting of representatives of all five madrassah Wafaqs (religious degree-awarding institutions). The agreement envisages registration of madrassahs with the Ministry of Education. The ITMP had long demanded that the madrassahs to be dealt with through the education arm of the government.

The government would provide registration services to madrassahs through twelve designated one-window operation centres across the country. Registration will a now the madrassahs to open bank accounts, accept foreign students, and manage their administrative affairs independently. It would also allow madrassah students to take their secondary and higher secondary exams through their local government-designated education boards and apply for further academic qualifications through mainstream education institutions or for jobs commensurate with their qualifications.

The August 29 agreement has one fundamental difference when compared with the agreements reached by the governments of Pakistan Peoples Party (PPP) and Pakistan Muslim League-Nawaz (PML-N) in October 2010 and July 2016, respectively. Both the previous agreements had provisions for according the status of private education boards to the five madrassah Wafaqs in return for introduction of contemporary subjects into the curricula of the madrassahs affiliated with them.

This was a sweeping concession, available irrespective of the division of these Wafaqs along sectarian lines, lack of transparency regarding their functioning and election of their office-bearers and their capacity issues with respect to operating as government-recognised private education boards, awarding primary, secondary, and higher secondary school certificates.

Perhaps this was the primary reason these agreements could not be implemented. In 2015, the National Counter Terrorism Authority (NACTA) took a major step towards the implementation of these agreements by constituting two committees having representation of the ITMP to negotiate with Inter Board Committee of Chairmen and the Higher Education Commission on the question of equivalence for the madrassah certificates/ degrees. However, little progress followed.

The government would provide registration services to madrassahs through twelve designated one-window operation centres across the country. Registration will a now the madrassahs to open bank accounts, accept foreign students, and manage their administrative affairs independently.

By virtue of the August 29 agreement, the government has persuaded the ITMP leadership agree to abandoning their longstanding demand of being acknowledged as private sector education board for the award of mainstream education certificates without interference in their religious curricula. Credit is due to the government not only for making the ITMP leadership agree to mandatory registration of madrassahs with government-recognised education boards for taking mainstream education exams but also for having the vision to understand that the previous two agreements could take the process in the wrong direction.

Since the ITMP leadership has already agreed to cancellation of registration of madrassahs not adhering to the procedure laid out in the agreement, if properly implemented, the timelines might be followed. It should come across as good news for the 3.5 million students presumed to be enrolled in over 35,0000 madrassahs across Pakistan. The longstanding demand of the ITMP leadership for the madrassahs to be dealt with through the education departments has been accorded.

While on one hand, facilitation in opening of madrassah bank accounts would assist madrassah administrations in managing their funds, on the other hand, it would improve the government’s oversight of the financial transactions of madrassahs. Affiliation of madrassahs with education and vocational training boards would help madarssah students gain respectable livelihoods, in addition to religious teaching.

The government has also said it will provide assistance to madrassahs in fulfilling their registration obligations. Although not specifically mentioned in the agreement, the special research cell at the Ministry of Education would help relevant stakeholders conduct research on issues related to madrassahs so that future strategies are based on empirical evidence. Provincial governments have also been taken on board for the reform process.

It is important to note that there are hundreds of madrassahs in the country that are not affiliated with any of the five Wafaqs represented by the ITMP. Those madrassahs would also come under the ambit of the provisions of this agreement and would not be compelled to get themselves registered with any of the five Wafaqs for recognition as education institutions. Instead, they will be registered with the government of Pakistan.

The ITMP leadership also deserves credit for reaching this agreement with the government. They seem to have accepted the initiation of dialogue anew from a different long-term strategic vantage point. Perhaps, in keeping with the changing dynamics of modern times, the ITMP leadership also needs to promote transparency in their processes, such as election of the office-bearers.

This will provide a level playing field for students of the school and madrassah systems and promote a healthy competition between them for the greater benefit of the youth. The government needs to make concerted follow up efforts to implement the agreement so that it does not end up gathering dust in its offices like the agreements concluded previously.

Another step towards madrassah reforms