There are questions and concerns about Islamabad’s master plan 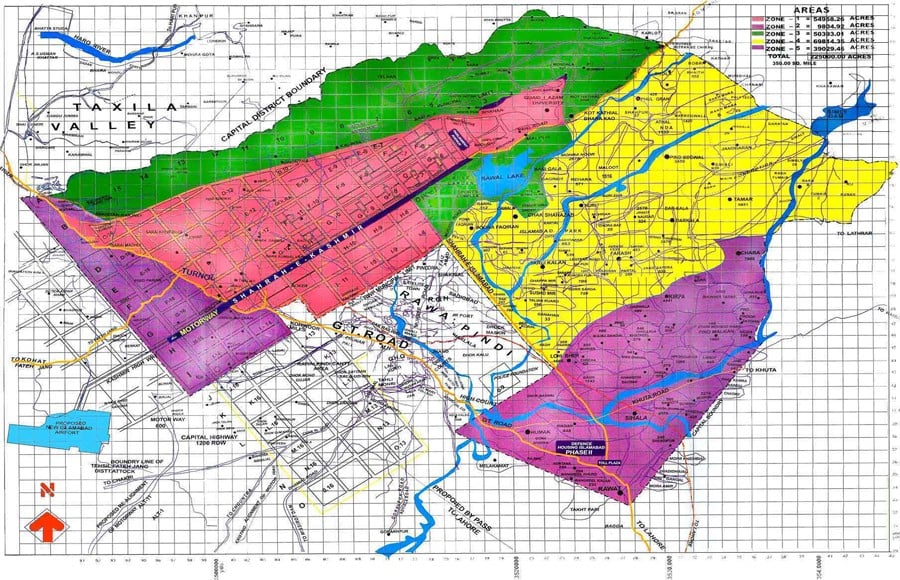 The Capital Development Authority (CDA) has finally received federal cabinet’s approval of the new master plan for the city and a reform package for the CDA, Islamabad Chief Commissioner and CDA Chairman Amir Ahmed Ali has told TNS.

This is a watershed moment for the federal capital. To understand this development, one needs to keep into consideration the fact that Islamabad is not like any other city in the country. In 1960, the first buildings were built after national and international experts approved its layout plan. The city has five zones housing residential sectors, the National Park area protected against all construction activities, green belts and housing societies, a majority of which lack No Objection Certificates (NOCs) from the CDA.

In addition, all construction activities outside residential sectors have been halted in the city until the implementation of the master plan.

Islamabad Deputy Commissioner, Muhammad Hamza Shafqaat, says that originally the CDA was meant to look after the residential sectors and the surrounding areas were to be looked after by rural municipal committees. After rural areas showed excessive growth of housing societies, the CDA had to look after them as well.

The city housed only a few government officials in 1960 but, according to the recent census, its population exceeded 1.015 million in 2017. Hence, redesigning the 60-year-old master plan was the need of the hour.

CDA Chairman Amir Ahmed Ali made a presentation before the cabinet for the renewal of the master plan and reforming the civic body. He told TNS that the new master plan provides for the needs of the city for 20 years. The first master plan approved in 1960 was also meant for 20 years.

Asked if he believes the city will expand upto the protected National Park area as has been feared, he replied, "There is no such thing. Margalla Hills will remain protected as they always have been. We have not changed zones, not least Zone 3 (Zone 3 is meant to be green)."

He said no policy for commercialisation of roads in residential areas was on the cards. "We have not allowed construction of business centres on either sides of the Park Road." (Park Road leads from Pakistan Agricultural Research Council facility to agricultural farms of Chack Shehzad.) These farms were supposed to produce vegetables and fruits for the city but influential allottees, including former president Pervez Musharraf have termed many of these farms into lavish villas.

Footpaths have been made mandatory for all roads. Earlier, there were walkways on some roads but it was not a requirement of the master plan. From now on, no road in Islamabad will be built without constructing a footpath. In rural areas, the standard width of the roads has been enhanced from 12 feet to 60 feet, to facilitate greater mobility.

Under the previous government, an effort was made to formally commercialise this road and remove the research council to make way for the construction of business centres. The then minister of state for Capital Administration and Development Division (CADD), Dr Tariq Fazal Chaudhry, was the main proponent of this move, which would have converted the agriculture land and farm houses into commercial land. However, the matter attracted media attention and after severe criticism the previous government dropped the idea.

Amir Ahmed Ali, also rules out the possibility of commercialisation of Islamabad Expressway, which links Islamabad with GT Road and is flanked by popular housing societies. Influential property tycoons have long been pushing successive governments to commercialise this road.

Ali says that the new master plan is investor-friendly. "In the past, it was mandatory for housing projects to have 1,200 kanals of land at least. People could not find such large chunk of land and would sell land after developing a plot at a time. "The activity was generating no money for the CDA. Now we have approved housing projects on as little as 200 kanals of land so that these societies come in the planning net. We will enhance business activity without compromising our commitments to green and clean Islamabad as per the vision of the prime minister. We have allowed housing societies on smaller chunks of land but have increased the mandatory park space from six to 10 percent," he said.

He dismissed fears that Islamabad was about to be swamped by high-rise buildings, saying in residential sectors and commercial areas, no new stories will be allowed on existing plazas or new ones to preserve the character of the city. If we allow 20-storey or 30-storey buildings in commercial areas, it will compromise people’s privacy and the city’s culture.

Ali said high-rise buildings will be allowed in Blue Area, the commercial hub of the federal capital, and in areas that have been specifically chosen for business activity. "We have legislated some restrictions. One may build high-rise buildings but one will have to leave vacant spaces on the ground. In the past, builders had to leave 50 percent of the plot vacant to build tall buildings. Now they have to leave 60 percent of the space vacant to build tall buildings," he said.

Five new parks will be laid in rural areas, one of which will be patterned after F-9 Park, the city’s largest park, he said.

Footpaths have been made mandatory for all roads. Earlier, there were walkways on some roads but it was not a requirement of the master plan. From now on, no road in Islamabad will be built without constructing a footpath. In rural areas, the width of the roads has been enhanced from 12 feet to 60 feet, to facilitate greater mobility.

The CDA will build a ring road around Islamabad, from Sihala to Margalla hills. It will reduce traffic, especially on Islamabad Expressway that stays choked on account of heavy trucks going from GT Road to Peshawar.

For the development of rural areas, Rs 23 billion has been allocated and a mechanism for generation of this money has also been put in place. "A housing society pays only Rs 5 million to get registered. They use our roads, water and all the resources. We are going to raise their registration fee as these facilities do not come for free," he says.

The economics of the city planning, he claims, has been taken into consideration at the time of designing the new master plan.

It will take one year to complete the main study in which measurement of each and every road will be incorporated. He says that historical places of Islamabad will be protected to promote tourism.

"If we succeed in preserving historical sites of Islamabad, we will surely earn a lot through tourism. People of all religions and all parts of the world and not just Budhists will come here," says Dr Sajid Awan, director of National Institute of Historical and Cultural Research (NIHCR).