An unregulated Bar, the aspiration for social capital, and the impunity that comes with being part of the legal fraternity are what fuels wuklagardi 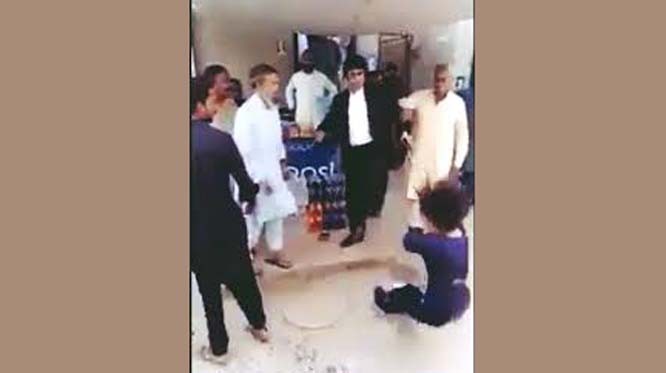 Earlier this week, a video of two male lawyers from Shakargarh mercilessly thrashing a woman went viral on social media. This woman fought back against men who, within court premises, appeared to be operating with the belief that they were well within their right to beat her up.

The woman later registered a first information report against the perpetrators for outraging her modesty. The result was an extreme backlash. Lawyers went on strike, demanding that the criminal complaint be quashed.

How dare a woman, one outside the legal community, stand up to those belonging to one of the ‘most respected professions’ in Pakistan?

Threatening violence and outrage, these advocates, who are duty-bound to serve the law, resisted the due process with all their might. They sought to protect their own ‘brotherhood’ over holding those accountable who are maligning the legal profession and reducing it to what has come to be called ‘wuklagardi’.

What was a promise of better days post the Lawyers’ Movement has materialised in the form of an unregulated and ever-growing jungle that is making it even more difficult to navigate court spaces.

Let us consider an example of how this has impacted women.  Agreed that this instance was not - and is not - the first time a woman has been unsafe court premises. Women are often subject to violence at the hands of lawyers who have the backing of the bar. Female judges in the lower judiciary and female lawyers are equally vulnerable on account of their gender. There is palpable fear. There have been instances in the past two years of female judges being locked in their chambers by male lawyers for giving unfavourable rulings. There have also been cases of female lawyers being abused and assaulted while advocating petitions against Bar leaders.

A strong Bar is necessary for a balanced judicial system. Yet, there have been more instances of overwhelming the courts than of keeping them in check. What has caused the Bar to behave in this way?

The answer is complex.

How dare a woman, one outside the legal community, stand up to those belonging to one of the ‘most respected professions’ in Pakistan?

Often when young lawyers belonging to a lower-middle income bracket enter the legal profession, there is the belief that the black coat they wear with will bring a certain kind of social capital with it. In a market overly saturated by advocates and law firms only hiring foreign graduates, the best bet for a young lawyer with a local degree often is engaging in Bar politics. The Bar affords them a certain kind of protection, a certain level of empowerment that they are drawn to. Being on the right side of history in Bar politics is a privilege, especially when the choice is an easy one to make. Take for instance, progressive lawyers protesting in support of the chief justice in 2017, and against them, a huge group of lawyers opposing this stance. The differences between both in terms of class, politics, and what they stood for were stark. Succumbing to the chief justice would be undermining the power of the Bar, and those under its umbrella as a collective.

The Bar is an ever-growing monstrosity because there is grassroots support for it. The power that it has over the justice system thus makes politics lucrative for lawyers. It contributes to the belief that the ‘kaala coat’ seconds as a cape, a cloak that empowers and elevates lawyers above the law and renders them invincible.

That the Bar politics at the grassroots level is instrumentalised to gain clout is a sad reality. What is compromised in this process is the fairness of the justice system. ‘Wuklagardi’ often becomes a blanket term for a complex reality. It keeps us from getting to structural problems, and calling out those who exploit their social positions in the legal community.

Dialogue can help us come up with ways to break the hegemony of privilege and class in the profession. Local advocates need not always be treated as the go-to people. We must revisit how we see the Bar at the local level. The Bar must not use the power of the black coat for social gains, and it cannot be unregulated to a point where the judicial system gets compromised out of the fear of violence and outrage. As long as we keep feeding into the biases we have for the Bar and those at the local level, the frustration will keep rising. There will always be people protecting one another for harassment and violence. And they will always find shelter in the Bar.

The right to belong