The guardians of rallies

In the past few weeks, Ansarul Islam, the volunteer force of Jamiat Ulema-i-Islam-Fazl, has astonished many people in Pakistan. But such organisations are not a new phenomenon 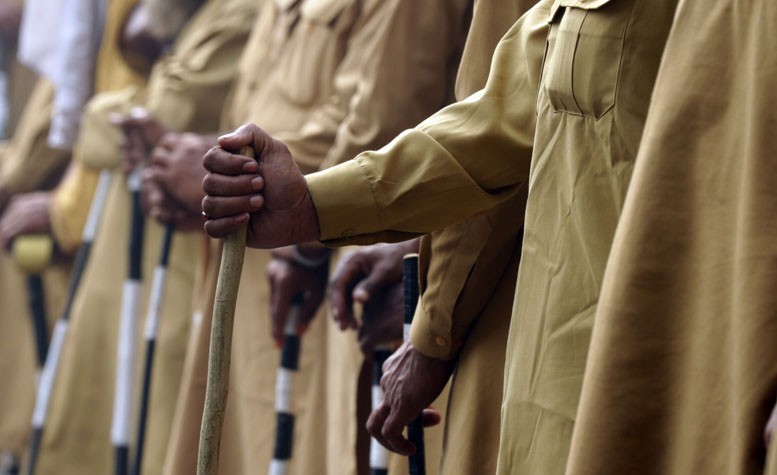 The photos and videos of Ansarul Islam (AI), the volunteer force of Jamiat Ulema-i-Islam-Fazl, dressed in yellow shalwar kamees, wielding sticks, have been the hot topic on prime time talk shows and social media for the past few weeks.

On October 24, the federal government authorised the provinces to take action against AI men, and exercise their power to ban the organisation under the Private Military Organisations Act 1974. The JUI-F challenged the government’s decision before the Islamabad High Court which dismissed it as infructuous.

While this force astonished many people in Pakistan, it is not a new phenomenon. Before the partition, Jamiat-i-Ulema Hind (JUH), Khudai Khidmatgar Movement (KKM), Khaksar Tehreek and Majlis-i-Ahrarul-i-Islam were prominent political groups whose members dressed in uniforms. No wonder, the JUH and KKM descendants - JUI-F and the Awami National Party (ANP) - still maintain a force of volunteers to secure and discipline their rallies and meetings.

"The AI was established in 1952 when the party was formed," says Abdul Razzaq Abid Lakho, central chief of the AI. "The AI is not just a JUI-F wing. It’s an organisation."

He adds that the AI also organises relief work following natural disasters. It has an organisational structure with a salaar (head) each overseeing matters at central, provincial, district and union committee level. Each volunteer of the AI must wear the uniform and undergo basic training.

The AI gained importance when militant attacks on JUI-F rallies became frequent. The volunteers perform security duties, including body searches and block crowds from climbing the stage at rallies and party meetings. "The AI leaders are also required to meet with the local police to map out a security plan before every public rally or protest," says Lakho.

Recalling a failed assassination attempt on Fazlur Rehman in Quetta in 2014, Lakho says the suicide attacker could not reach the party supremo because of an AI volunteer, Shah Muhammad, from Harnai district in Balochistan. "He sacrificed his life to protect his leader."

Before the partition, the JUH, the key Deobandi religious party formed in 1919, used to assign a number of members to wear white clothes with khaki neckerchiefs. The JUH has recently launched a volunteer body, called the Jamiat Youth Club.

Qasim Jan, a former ANP Karachi president and author of a book on Khudai Khidmatgar Movement (KKM) says Abdul Ghaffar Khan started the movement in 1929. "A volunteer campaign mainly to eradicate social evils, such as illiteracy, blood feuds, crimes and use of intoxicants was launched by him. The KKM members were directed to wear a uniform of dark red colour and join the routine parade," says Jan.

Initially, he adds, the uniform was white but it was later changed to red - "as members complained that white gets dirty too easily".

According to Jan, the KKM volunteers would visit villages to educate people about the KKM’s main objectives. "Now, they are meant only to provide security to ANP rallies".

Nangyalay Pashtun is headed by a salaar (head) each at central, provincial, district and union committee levels.

The guardians of rallies