A train of accidents 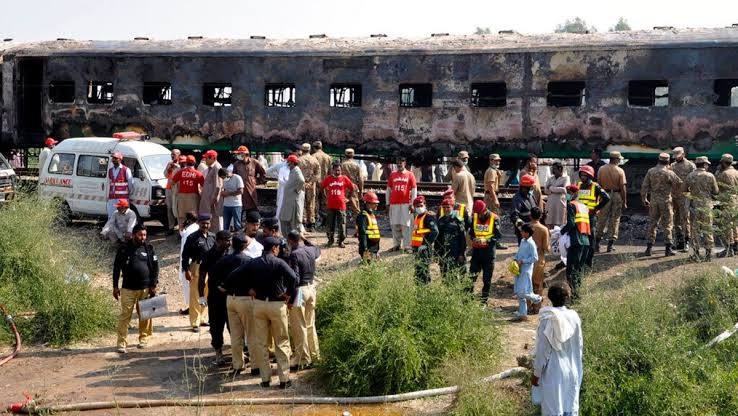 The details are harrowing… bodies burning, people injured after jumping off the moving train, people shrieking, trying to free people trapped in carriages engulfed by flames… It was a scene from hell near Liaquatpur in Rahim Yar Khan district.

At least 74 people have died and 40 have been injured after a fire broke out in Tezgam travelling between Karachi and Rawalpindi on October 31. Reportedly, a gas cylinder explosion caused the incident. The fire destroyed one Business and two Economy class carriages.

Incidents calling into question train safety have become common in Pakistan. Between August 2018 and June 2019, 74 accidents were reported. According to data presented in the National Assembly by the Ministry of Railway, 20 freight trains have derailed and 20 accidents occurred at unmanned railway crossings.

The exact cause of the Tezgam accident is not known. Some people present on the accident site claimed that the fire was caused by a short circuit.

"All accidents can be avoided," says Mian Shafqat Ali, a former Business Train operator. "Pakistan Railways do not follow the rules. No passenger should be allowed to carry explosive material, cylinder, stove etc onboard."

Ahead of the latest tragedy, he adds, "all rules were violated".

He says it’s possible that short-circuiting caused the accident. "It cannot be ruled out. But, still, why were the passengers allowed to carry stoves on the train?"

He proposes that the Pakistan Railway purchase induction cookers for the safety of passengers. "They are safe. They light up only when a pot is placed on the top. They cost only Rs5000 a piece."

Commenting on rail safety, Mian Shafqat Ali says the Pakistan Railways must replace, repair and maintain tracks. "A grade 20 officer must inspect the train before it embarks on a journey. If a train is taking off from Karachi, it should be inspected again in Sukkur and Khanewal."

In India, "senior officials are entrusted with the inspection of trains. That’s why accidents are less frequent there than in Pakistan," he says.

An inquiry into the accident has been initiated. Aijaz Ahmad, chief executive officer of Pakistan Railways, tells TNS that after the initial report, officials belonging to commercial transportation group and Railways Police have been suspended from service for showing negligence. "Junaid Aslam, grade 18 officer of Karachi division, Abid Qamar, an assistant commercial officer of Sukkur division, Rashid Ali of Sukkur division, Ahsanul Haq of Karachi division have been suspended. Additionally, two police officials of grade 17, including deputy superintendent Dilawar Memon and Habibullah Khattak and a deputy superintendent of Karachi Railways Police have been suspended."

He said that Pakistan Railways planned to purchase induction cookers phase-wise because of shortage of finances. "We will adopt scientific methods to prevent accidents."

Arslan Butt, spokesperson to Inspector General of Pakistan Railways Police, says that passengers carrying gas cylinder will be strictly checked. "An FIR will be lodged against them if they hide them in their luggage," he concluded.

A train of accidents