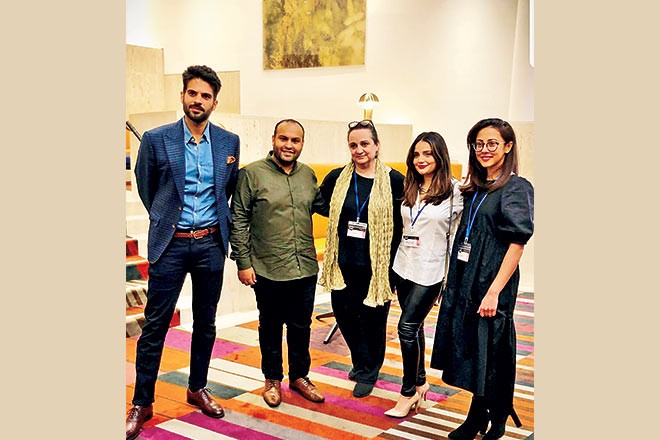 This past week was all about art and artistes; we saw events like Pakistan International Film Festival, Women in FocusPK and the Karachi Biennale kick off in various parts of the country. Apart from this, Pakistani celebrities represented the country at Lahore Literary Festival in London. Instep gives you a lowdown on the hot and happening activities that took place in the last seven days.

The fourth edition of Lahore Literary Festival (LLF) was held at the British Library in London. The one-day extravaganza was devoted to contemporary Pakistan covering literature, music, art, popular culture and more. Actor and host Adnan Malik along with actresses Armeena Rana Khan and Ainy Jaffri also attended the LLF and were part of a session, called ‘Go West: Pakistan’s Global Screen’. The session, which was about Pakistani dramas and its outreach to the diaspora as well the possibility of more progressive narratives on the digital platform, was moderated by BBC World Journalist Fifi Haroon, while it also featured BBC Entertainment reporter Haroon Rashid.

After the first edition of Karachi Biennale made its debut in 2017, the second edition of Karachi Biennale 2019 (KB19) opened with a gala ceremony that was held at Bagh Ibne Qasim (one of the seven Biennale venues this time around). Apart from artists and curator Muhammad Zeeshan as well as several KBT trustees, it was attended by the Mayor of Karachi, Wasim Akhtar and well-known names like Amin Gulgee, Atteqa Malik, Ayesha Tammy Haq, Bushra Hussain, Farzana Tunio, Imran Qureshi, Italian Consul General with Carlo Galli, Rashid Rana, RM Naeem, Shakira Masood, Stefan Winkler (Director Goethe Institut) along with Susanne Kriemann and Sacha Kagan among many others. However, the opening ceremony of the art event was over shadowed by the shutdown of works by Adeela Suleman. While KBT issued a statement backing the shutdown, artists released their own statement, condemning the act and protesting at Frere Hall in Karachi.

PIFF 2019 concludes with a special sneak peek of The Glassworker

With the aim to create a unique platform to promote Pakistani cinema and Pakistani filmmakers, the second edition of Pakistan International Film Festival (PIFF) organized under the banner of Karachi Film Society (KFS), took place in Karachi this week. The 3-day festival highlighted the potential of animation in Pakistan and animated films like Donkey King, Quaid Say Batain and Allahyar and the Legend of Markhor among others were also screened. PIFF 2019 concluded with a special sneak peek of Pakistan’s first hand-drawn animated movie, The Glassworker, which is directed by Usman Riaz - who is also the co-founder of Mano Animation Studios. Usman Riaz is seen here with Mr. Geoffrey Wexler, a veteran of Studio Ghibli and chief of Studio Ponoc.

This past week also saw Focus PK 2019 - Women in Media Awards, which acknowledged dynamic women who have contributed immeasurably to society and their country at large. The event was held in Karachi at the Governor House with Honourable Governor Sindh Imran Ismail as the Chief Guest. The exclusive event, which was held in support of breast cancer awareness, was attended by corporate personalities, celebrities, socialites, media and enterprising women from different professions.

Hosted by actress and chairperson of FocusPK, Atiqa Odho, the awards were presented to Sharmeen Obaid Chinoy, Noorul Huda Shah, Frieha Altaf, Fareshteh Aslam, Fizza Ali Meerza, Maheen Khan and Sheema Kirmani among many others for their hard work in their respective fields.