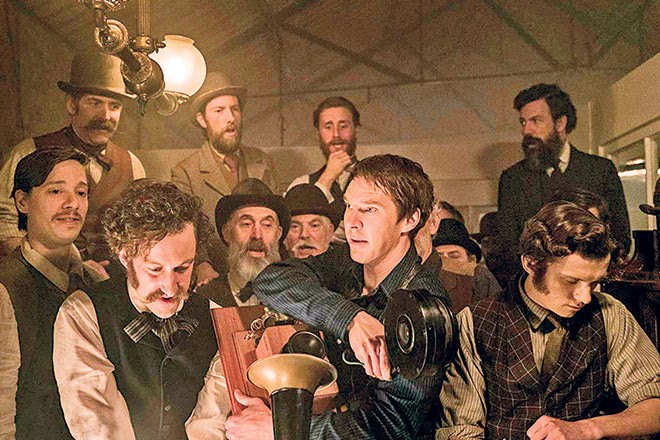 The year is 1880. Thomas Edison (Benedict Cumberbatch), future inventor of many great things and already a whiz at self-promotion, has brought a group of finely dressed, top-hatted businessman by train to a field in Menlo Park, New Jersey. Then, upon their exit, he shows them what he’s just patented: a glass tube that gives off a light. He flips a switch and the entire grounds are illuminated by what appears to be dozen of these new contraptions. "Gentlemen, I hope you brought your checkbooks," he quips. Now, if he can just get that ruddy-nosed J.P. Morgan (Matthew Macfadyen, a.k.a. Tom from Succession) to give him millions of dollars, his legacy as one of the 19th Century’s greatest innovators will be secure! Huzzah!

Meanwhile, In Pittsburgh: George Westinghouse (Michael Shannon) and his wife Marguerite (Katherine Waterston) are prepping a lavish banquet in order to wine and dine Mr. Edison. They go to the train station to meet him and watch as the locomotive speeds by the station without stopping. Thomas is "tired" and, against the better wishes of his spouse Mary (Tuppence Middleton) and trusty assistant Samuel Insell (Tom Holland), he blows off the meeting. The two, you see, are competing with each other over who will lead the soon-to-be-burgeoning industry of electricity. Edison believes that his direct current (DC) is the best way forward. Westinghouse’s alternating current (AC), however, may have the edge. Whoever controls the lights, controls the universe.

Over the next few decades, a "war of currents" and much media-fueled slander ("Generous Gentlemen Called Disingenuous By Genius") between the men will ensue. Oh, and futurist Nikolas Tesla (Nicolas Hoult), who has some radical ideas, fits into this, er, somehow as well. There will also be tragedy and Civil War flashbacks and the invention of the electric chair and blackmail and a child saying "I love you" in Morse code and oh-so-much more. It will culminate in the 1893 Chicago’s World Fair, with these enemies fighting to light the event and thus become the name that history will remember forever and ever and ever.

On paper, this project has "and the envelope, please" stamped all over it, which is undoubtedly why someone -- let’s call him "Harvey" -- originally took on the project as a producer/patron saint. It also has the makings of a story about brilliant but conflicted men fighting over progress and credit, with the bonus of being able to dress up in period finery and sport majestic facial hair, which is why actors of such caliber may have been attracted to it. And at its core, it’s a tale that suggests incredible spectacles of light and artistry nestled around a core of humanity, something that surely appealed to director Alfonso Gomez-Rejon, fresh off a breakthrough Sundance movie Me and Earl and the Dying Girl.

What The Current War brings to you on screen, however, is a somewhat muted version of all of that, as well as an often muddled retelling of a historical moment buffered by stylish bells and whistles. If there’s a slight chance to enliven the dryness of the material with a Dutch angle, or a wide-lensed close-up, or a newspaper editorial coming to life, then by Jove, this movie will find it. Some creative choices work, like a score that combines old-school symphonics with synthesized bloops and bleeps in the name of form mirroring content. Others, like a cinematographic palette that plays like paint-by-numbers prestige drama. It’s not a bad film, just a generically bland one.

No film should be eclipsed by its creation, and a rough birth doesn’t mean success (Titanic) or failure (Ishtar). The Current War is neither of those films -- not a project plagued by production problems that rose phoenix-like upon its release, nor a mercilessly slagged work that is synonymous with major flopitude and is likely to be redeemed decades later. But it is worth noting why it now bears "The Director’s Cut" as a subtitle. After Gomez-Rejon submitted his cut in 2017, the aforementioned producer -- yes, that Harvey -- began sending a blizzard of notes. The film was rushed into a Toronto Film Festival premiere before it was ready and did not get a favorable reception. The executive’s alter ego "Harvey Scissorhands" entered the picture, and was still slashing away on his own version in October 2017 when, well, you know what happened next.

Having finally rescued the film from post-scandal limbo, recut to his own specifications and reshot several scenes (including a new sequence based on his own bullying by Weinstein, which, maybe leave the grudge-settling out of your narrative?), Gomez-Rejon now releases the film he claims he wanted to make, without interference from Hollywood ogres. It is a victory, if a somewhat bitter one. Because now the film must now be judged by what’s up there onscreen. And compared to a behind-the-scenes story rife with an idealistic young hero, a repulsive villain, a David-vs.-Goliath clash, a major rise and fall, a compromised artistic vision, an unbelievable second-chance second act, and a comeback happy ending, The Current War simply can’t compete. A movie about its making would be compelling, dynamic and a livewire rush. The thing itself is a dead end.