Karachi Biennale distances itself from Adeela Suleman’s work to stay on the right side of power, despite outrage from the creative community 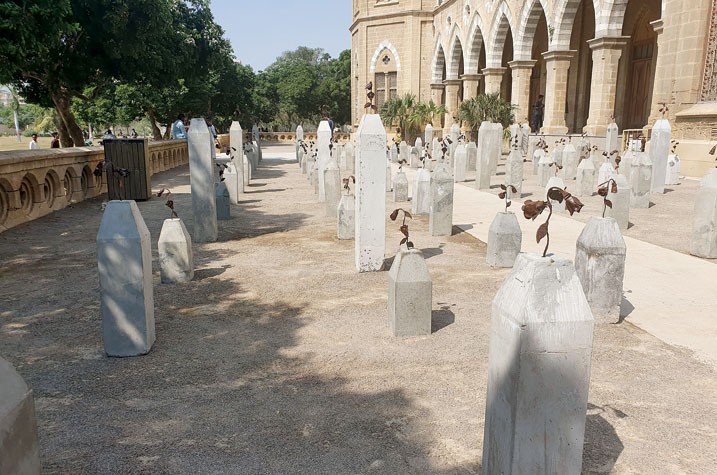 There are three ways to react to what happened to Adeela Suleman’s installation at Karachi Biennale 2019. To say nothing, as if nothing of import has happened; to mourn over the flagrant way the artwork was shut down and demolished; and to laugh at the absurdity of it all. The last one seems most apt; after all, the state authorities managed to do what the artist could not have dreamt of attaining on her own: making her work headline news.

The irony is that hiding a part of Suleman’s exhibit from public view and destroying the other part of it has made her artwork stand for -- or against -- what it never intended to manifest or critique: censorship. By no stretch of the imagination, did she aim at highlighting the glaring absence of freedom of expression in today’s Pakistan.

Hers was, on the other hand, an act of protest and artistic commentary on the well-documented and well-known phenomenon of police encounters. Since the 1990s, police – originally in the Punjab but later in other parts of the country as well – have been accused of killing assorted criminals, real or imagined terrorists and innocent citizens; in what are generally known to be staged shootouts. What Suleman’s artwork did was to locate this phenomenon in a specific time and space: Karachi circa mid- 2010s. That perhaps is what most, if not all, works of art are meant to do anyway: showing the general through the specific.

Some other specifics in Suleman’s work are also in line with her intention to remonstrate over an act of suppression: she has named a particular police officer who, by his own admission, has killed scores of people alleged to be terrorists and law breakers; she has also given the exact number of those killed at his hand: 444. The police officer is now retired and is facing a trial on murder charges - for the killing of a young Pakhtun model, Naqeebullah Mehsud, in early 2018.

To depict all this, the artist manufactured a large number of concrete pillars, installed them at Frere Hall – one of the public places where artworks featured in the biennale were displayed this last week – to make them look like the tombstones of encounter killings, victims. She also made arrangements to show a documentary featuring progress, or lack thereof, in Naqeebullah’s case.

All this is, undoubtedly, intentional. Suleman seems to know what she is talking about and why. She is aware of the fact that Naqeebullah, since his murder, has spawned a whole movement that is seeking justice for him as well as for many other victims of the state’s excesses. Consequently, its members are facing a blanket media blackout, arrests and arbitrary detentions. The title she chose for her artefact, The killing fields of Karachi, also unambiguously invokes the whimsical slaying of a people by their own state – just what Cambodians had experienced under the Khmer Rogue regime between 1975 and 1979. There are no grey areas here. No room for speculation or interpretation. The artwork is loudly and clearly saying, what it meant to say: that a police officer, symbolising the arbitrary manner in which an oppressive state treats its citizens, operated in a realm existing above the law, to take out those he regarded; as enemies of the state.

The irony is that hiding a part of Suleman’s exhibit from public view and destroying the other part of it has made her artwork stand for -- or against -- what it never intended to manifest or critique: censorship. She did not aim to highlight the glaring absence of freedom of expression in today’s Pakistan.

So, it can be soundly argued that Suleman neither intended nor envisioned her artwork to be about censorship. Only the action against it has made it so. The organisers of biennale, in fact, went a step ahead and, in a shocking disclaimer, stated that her artwork was not even meant to be political, of course, their stance is difficult to accept. Given that the mere mention of Karachi and the ‘killing fields’ together has obvious political connotations and considering that they have not yet removed the mention of Suleman’s work from the biennale’s website, they seem to be fully aware as to why, how and where it was scheduled to be installed - a fact they are now denying at the expense of earning the anger of the entire creative community in Pakistan.

The actual problem, however, is neither in the artist’s real or now transformed objectives, nor in the organisers’ desire to remain on the right side of power. The real issue here is a state that has the capacity to monitor everything in the realm. Additionally it also has its own rigid ways of interpreting and analyzing everything it monitors. The functionaries of the state are seemingly well-informed, even about those artistic and cultural activities that most people in the country remain blissfully unaware of. More worryingly, those functionaries view these activities as those engaged in them never do: that they are dangerous, that they could promote anti-state feelings, that they could tarnish its image and threaten its security.

The state, in other words, has become so omnipresent that its prying eyes can observe and decipher everything - even the well hidden agendas that the eye of a mere mortal is unable to detect. This should worry many of us – or at least make us laugh at the absurdity of it all: wouldn’t the state be much better off, using its invasive pervasiveness as a means to improve crumbling civic services and dilapidated human development institutions?

The absurdity becomes even more acute when one considers the fact that an artefact in an art biennale, no matter how controversial, could have come and gone like so many others before. Why make it the talk of the town? The answer is as obvious as it is bizarre: someone, somewhere certainly did not want anyone to see the artwork and talk about it. One wonders why a retired police officer who is being tried for murder cannot be critiqued even in a work of art.

One also wonders what has tarnished the image of the state more: the artist who created The killing fields of Karachi or the original architect of the murders she has portrayed. Who would want to save his image and why? The answer, of course, is as elusive as the reasons for taking down the artefact.