"Lahore has been my city ever since" -- IV 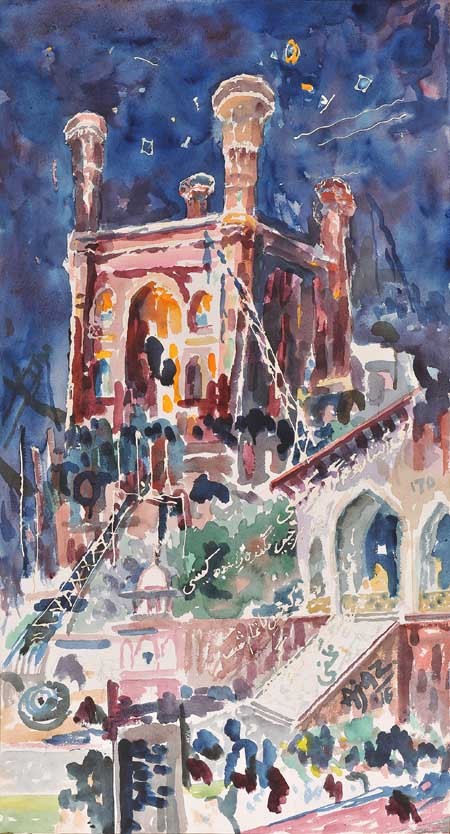 Old photographs depicting the three minarets of Chauburji show it standing amidst a vast cultivated area. Again, from ‘Penny Prints,’ we learn of the river Ravi (named after Iravati) flowing next to it from where the first railway engine, brought upstream on a steamer, had disembarked to be carried to the City railway station built by the notorious demolisher of built heritage for old building materials, Mian Sultan Thekedar, by road, pulled by bullocks.

As people gathered to see the horseless carriage, the driver had to blow the horn which sent all running every which way, they took the engine for a living being (source: 100 Years of Pakistan Railways).

The fourth minaret of Chauburji had come down during the earthquake of 1843. It was rebuilt during the late 1960s, devoid of any tiles to point that it was a replacement, conforming to the dictates of the Charter of Venice. The four minarets are in the style of Masjid Wazir Khan. However, Hyderabad’s Chaar Minar was its distant prototype, whose motif was adopted in Akbar’s tomb gate, and in Jahangir’s tomb, though the four minarets were placed at the corners of the tomb structure in the Taj. The minarets serve as buttresses and are, therefore, solid, without stairs on the inside.

Chauburji, as it came to be known as, was originally a huge gateway to a garden second only to Shalamar, from which it drew inspiration for Chahar Bagh comprising falling streams, fountains, flowerbeds, and fruit trees.

Chauburji itself reflects the poetic and aesthetic sense of the princess with whom the garden is associated. We see still-lifes with fruits and flowers in glazed tiles, fresh to this day. Spread over a very large area, irrigated by canals from the nearby Ravi, it came to be known as the garden of Mian Bai, the lady who supervised the project. Its financer Zaibun Nisaa, the eldest daughter of the emperor Aurangzab, a cultured lady and a prominent poet with the pseudonym of Makhfi, meaning hidden or anonymous, graciously allowed Mian Bai’s name to be inscribed prominently in the glazed tiles on the façade.

It may be recalled that Pran Nevile in his book, Lahore: A Sentimental Journey, mentions Bhalla as much maligned by his own folks. Thus, "Hindu ho ke juttian waiche, matt mar gai e ****** di." I remember a Hindu who used to come from the US to buy sheepskin jackets in bulk, from Uygur Turks, originally from China, settled in Istanbul. These same Chinese had previously come to Lahore on the eve of the Chinese Revolution in 1949 (about the Urdu-speaking Lahori Chinese, wait for later dispatches).

The now defunct Taameer e Watan association (10, New Shalamar Road), had suggested that the name be changed to Zaibun Nisa Stop for the Omnibus. It was in this far end of her garden that she had built a resting place for herself to be near to her mentor, Shah Rustam Ghazi, whose tomb was built on a high mound, now concealed by shabby encroachments. Zebun Nisa’s tomb is a square one, topped by a "curvilinear, pyramidal dome," inspired by that of Mian Mir, Dara Shikoh’s mentor. As fate would have it, the 1638-born princess died in Delhi in 1702, and was buried outside Kabuli Darwaza. M/s Said Ahmad Khan, Shaikh Attaullah, and Hafiz Khan were entrusted with distributing alms and build a tomb for her. Her diwan (or compilation of poetry) was published later. Her tomb in Delhi was demolished to make way for the railway along with other monuments. In Lahore, however, Nur Jahan’s tomb had a narrow escape from the railway track. When Lutyens planned to shift the capital from Calcutta, many more Mughal-era monuments were demolished. However, Lodhi Gardens were spared.

While speculative statements about her imprisonment for some 20 years in Salimgarh Fort, Delhi, seems part of anti-Aurangzab outbursts, the monarch was quite capable of such acts. Her long absence from her dream project -- to pay homage to her grandfather, Shahjahan, towards whom she had great melancholic sympathies due his long imprisonment -- is reflected in her verses. It was in Shalamar seeing the great marble slide with herringbone zigzag engraved patterns to produce a rippling sound effect by water while cascading that she wrote,

In whose sorrowful recollection has(t) thou wrinkled thy brows?

What pain was it that impelled thee like myself, the whole night?

To strike the head against stone and to shed tears?"

How could she have stayed away from her beloved Lahore is beyond comprehension. Where history is adulterated, common sense has to be applied. When she died some 20 years later in her involuntary exile, at least her remains could have been brought to Lahore for a final royal salute. Who lies buried in the tomb that she had so caringly built for herself, remains Makhfi, a secret.

It, nevertheless, deserves respect and should not be disturbed by the Orange Train blitz or by the timber and furniture shops that have blocked its entrance, and the encroachments on the towers at its back. It’s like disturbing her memory. After all she had built there a bagh symbolising peace.

Lahore may be designated as a capital for retired ladies of royalty, to keep them away from Byzantine palace intrigues. Shahjahan who was born and crowned in Lahore, pensioned once most powerful lady of the bygone days, Nur Jahan, and sent her off to Lahore. Zaibun Nisa seems to have been ordained banishment in reverse. Her growing popularity with the commoners’ rebellious poetry and love for her grandfather could have been the cause. That she had dedicated her garden to Mian Bai shows her large heartedness.

Under the triumvirate rule, this garden and its vicinity came under the control of Sobha Singh who in collaboration with Muhkam Din dismantled marble slabs and screens. (These screens were of human height, erected as purdah for the lady’s grave, like the ones seen in the Taj, where Mumtaz Mahal lies in the centre while Shahjahan’s grave is on the side. Shahjahan was originally meant to be interned in another mausoleum across the river, in black marble.)

It was the same Muhkam Din who facilitated the entry of Ranjeet Singh into the Lahori Gate. Marks of light and heavy guns seen on one side of Chauburji indicate there must have been some kind of armed contest there. Resultantly, "Sobhe di Sohba gaie/Gujjar da gia maal/Lehne noon daina pe gia/Ho gia kangaal."

After the havoc played by the Orange Train fiasco, some conservation quacks are busy making the Zebun Nisa tomb ‘new’ again. The Lahore Conservation Society members and like-minded citizens in their last meeting held earlier on Waris Road decided to hold next Last Wednesday of the Month meeting at the tomb of Shahjahan’s granddaughter on October 30 at 3 pm. The Archaeology Department people have promised to attend it.

The writer is founding member of the Lahore Conservation Society and Punjab Artists Association, and former director of NCA Art Gallery. He can be reached at [email protected]

"Lahore has been my city ever since" -- IV