Still got the Blues 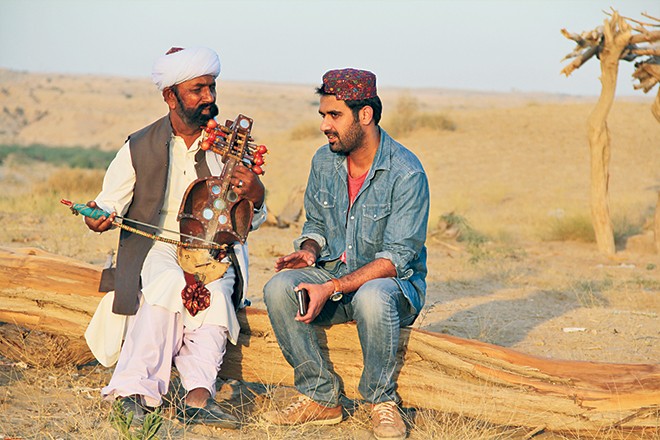 Since making its debut last year, Indus Blues, executive produced by Arieb Azhar and directed by Jawad Sharif, has left a mark on those who have seen it, enough to either win or get a nomination – at the very least. From Berlin to Italy to Pakistan, the film has received generous and much-deserving applause.

Pakistani documentaries - long and shorts - are the answer we’re looking for - in movies. Pristine shots, a strong narrative, stylish, aerial shots and drenched in reality, with gorgeous cinematography despite very little budgets - they’re already on their way to success, on the festival circuit at least.

Among such projects is Indus Blues, perhaps the most important documentary pertaining to music and the arts made in recent years.

Shown at several locations in Pakistan as well as abroad, Indus Blues finds regional musicians and instruments that seem to be finishing since there is no one left to take over and design them. It is a depiction of just how ambivalent we are about music in the larger context of culture.

Director Jawad Sharif, who’s been representing the film around the world, spoke to Instep about why he chose to make it and the positive response it has received - so far.

In between the Euro trip and taking the film to an international audience, Jawad Sharif took out time to speak to Instep about the unprecedented response to the documentary.

In between trailers, at least two music videos from the documentary - ‘Murli’ by Mai Dhai and ‘Kuttay’ by Arieb Azhar - have been released as well and both songs are organic and beautiful. Look out for them on YouTube.

The birth of Indus Blues has a lot to do with its director, Jawad Sharif. Speaking to Instep, he admitted that this film was a personal project. "The core idea came from the frustration within me with art and the oppression of it within society. As a filmmaker, I had to listen to things like ‘do something worthwhile; do something respectable’. When the word respectable is used it would disturb me that why art is not considered respectable. Why have we disowned it? Why do we keep saying it is not a part of our culture? Living within cities, we have to face such issues. Now imagine artists beyond urban areas and what issues they must be facing," said Jawad Sharif.

He credited Arieb Azhar in finding the musicians since Arieb is an artist himself and a brilliant one at that. He also credited FACE – Foundation for Arts, Culture & Education, in association with Bipolar Films. "Our team and volunteers also found craftsmen and connected the dots."

He added: "The other thing is I have always been interested in classical and folk instruments. I used to listen to them and I’m currently somewhat of an old soul where I prefer listening to classical music, old music and folk wisdom and I get into it and enjoy it."

As for the instruments shown in Indus Blues, said Jawad, "I didn’t just want to explore the instruments; I also wanted to put forth the idea about why they are disappearing. The search was for the instruments but also the reasons for their disappearance. The 2000 miles we traveled, we were in search of those questions and what are the answers and where will we find them. So, in a sense, it was a process of evolution and learning."

During the documentary, a number of instruments are showcased. As Jawad noted, "One thing we wanted to be clear about was shooting the instrument in its original setting because it’s not that one instrument will disappear, but with it a part of our culture will be gone and everything historic attached to it will finish so that was the effort. For example, for the Saroz player, we went to Balochistan and it was challenging; to get the permission etc. We filmed in Dera Bukti and while the restrictions were in place, at the same time, the people there told us that it has been 30 years since someone with a camera had visited. It was an interesting perspective for the artist as well as me."

Indus Blues, on and off, took four years to make. The shooting process took about a year, while the pre-production took one year and post-production took about two years. The amount of years put in the documentary shows - if you have had the privilege to watch it - that it is no ordinary production.

The response to Indus Blues on the international circuit has been very supportive but it wasn’t something Jawad expected. "During the filming, people involved with it were getting fed up as I am meticulous and my long term projects take time. There is no financial outcome so it is hard to take such a project along. But I tried to make an unfiltered independent project. The response to it, therefore, was unexpected. I mean I was not expecting such a response to what is essentially a documentary."

"On social media, it started a conversation about music and religion, and the artists came into the limelight; people got to see that this is our music and our art and culture and wondered why it is fading? So overall, it means that it is a myth that independent storytelling is not appreciated. The feedback has encouraged and motivated me and it is a sign for other filmmakers that if you bring a different subject and make something from your heart, there is an audience that will appreciate it."

Still got the Blues