The world according to the joker 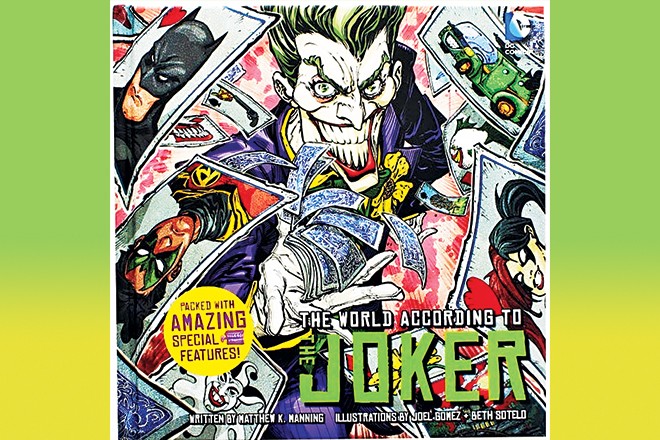 Everybody knows that the Joker is considered Batman’s ultimate nemesis, but not many out there know the story behind the creation of joker? Yes, Todd Phillips’ Joker, currently gaining huge numbers at the box office, revolves around the origins of Gotham’s biggest villain but that’s just one side of the story.

The World According To The Joker gives you an insight into the mind of one of the greatest enemies of the Dark Knight and also tells you a lot about his past, present and future. If you didn’t know that joker met with an accident while he was pretending to be Red Hood or that he got inside the head of his psychiatrist, Dr. Harleen Quinzel, who later morphs into Harley Quinn, fret no more.

This book tells you everything that you want to know about Gotham City’s fear creating anti-hero and his motivation behind being the number one villain.

It includes how he sees the world, his aspirations, why he loves Arkham Asylum so much and above all, why can’t he kill Batman and be done with it – you get answers to those too. In short, it takes you behind the powdered face of the Clown, the Prince of Crime who lives in his own world and has his own set of agendas and rules that he likes to break whenever he can.

The narrative of this book is interesting as well; it is laced with stuff that you don’t find anywhere else. There are post-it chits by the director of Arkham Asylum, Dr. Jeremiah Arkham, who refutes everything the joker pens down. Yes, the director asks him to write the book in his own words so people can relate to him and be sympathetic although the real reason was to keep him busy. Joker also uses his wits and humor to make the audience note his eccentricities like how to choose a costume, why he doesn’t feel good about cults, how to make joker gas, and what kind of transport he uses. He even tells them how to tell a joke!

You can also look at the world through joker’s perspective, decide the fate of Robins and learn about his hideouts where he keeps the loot. There are a few puzzles as well that have been designed by the joker so that he can have the last laugh, and he does so at the readers’ expense. Then there are letters from the Joker to Batman and from Harley Quinn to Joker that they have made public in addition to the comic strips he writes. However, they cause confusion because joker likes his audience to be busy while he does something sinister, taking advantage of their diverted mind.

If you wonder how one man can have so many different sides to him, with the joker you will keep guessing. He keeps the poster of his first appearance as a standup comedian to mark his first failure, declares some of his toys that he uses to win his little battles, his favorite lackeys who he uses often for his missions and even has a mirror placed within the book to tell you how he sees the world. Get your hands on this wonderful compilation and beware, his aim is to trick you and by the time you reach the last page, you will be surprised. Don’t be fooled by the Harlequin of Hate because that’s exactly what he wants.

The world according to the joker