No evidence has yet surfaced on the origin of the Lahore azadari processions. Local residents and scholars, however, attribute it to Syed Ghulam Ali Shah, commonly known as Baba Gamay Shah and Mai Aghaie, a pirni, in Punjab 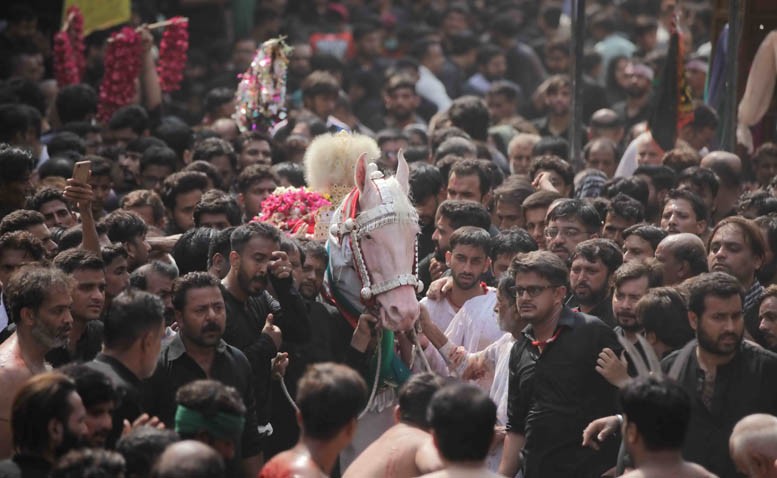 As the zakir’s last few words fade inaudibly, the collective wail echoing through the haveli is transformed. There is a flurry of movement, and the mass of weeping black dots along the courtyard, balconies, walls and windows grows arms. A thousand arms, frantically beating their own heads and chests to the words "ya Hussain".

Ripples race through the sea of people as they instinctually turn towards the right most corner. There stands a silent white horse, prepared for battle. Except that the spikes lined down his neck are gilded with gold, their edges carved intricately. His gold bridle, saddle, and shield fashioned after a cavalry horse, gleam wildly in the light. A white sheet spattered with red to resemble blood, drapes down past his knees. Instead of chain mail net, a vivid red mesh brightly embellished with traditional South Asian meenakari.

Soundless, motionless and riderless; a lone charge is imminent. Suddenly he moves, splitting apart the wailing and flagellating sea of people to create a narrow path. They swarm towards him, hands outstretched only to make way for him. Through the courtyard of mourners clad in black, a magnificently adorned horse races out to the streets. This is how the shabih e zuljinnah joins the procession commemorating the martyrdom of Hussain ibne Ali (with whom Allah was pleased), from Nisar Haveli in the Walled City of Lahore.

The zuljinnah, an iconic figure in Islamic imagination, first appeared in Persian ta’ziyeh (passion plays) reenacting the events of Karbala, imitating Murtajiz, the horse Imam Hussain rode into the battle on. Due to a vibrant deity-worshipping Hindu culture, South Asian Islamic orthodoxy deemed impersonations and figures as bid’at (wrong). The zuljinnah, however, was adapted by the early Shiite Deccan, Adil Shahi, Qutb Shahi, and Oudh dynasties in the mourning processions they established in cities such as Lucknow, Meerut, Hyderabad, and Ahmadnagar. Now many horses are raised, trained and participate as a staple to every jaloos, in modern-day Pakistan and India.

While major processions are identified by their city, technically there is no one jaloos, rather many small processions that go along together on a predetermined and historical route. Smaller groups identify on the basis of ethnicity as the baltis, families like the Patiala gharana, and matami sangats such as Zulfiqar-e-Haideri.

In the inner city of Lahore, each haveli plays a role, and divides responsibilities for events all year round. For example, the 9th Muharram jaloos begins from the Qizilbash or Nisar Haveli and ends at Karbala Gamay Shah on the night of the 10th. While the 20th Safar chehlum jaloos begins at Haveli Alif Shah and ends the same night at Gamay Shah. The Qizilbash Waqf established by Nawab Ali Raza and still plays a major role in the azadari practices of the inner city, one of its major contributions being the principal ziarat of the zuljinnah.

The zuljinnah was adapted by the early Shiite Deccan and Oudh dynasties in mourning processions they established in cities such as Lucknow, Meerut, Hyderabad, and Ahmadnagar.
No evidence has yet surfaced on the origin of the Lahore azadari processions. Local residents and scholars, however, attribute it to Syed Ghulam Ali Shah, commonly known as Baba Gamay Shah and Mai Aghaie, a pirni (female spiritual guru) in the Punjab.

According to local sources, 200 years ago, under Ranjeet Singh’s rule, Gamay Shah and Mai Aghaie along with some of their devotees carried out a small procession on the 10th of Muharram, and then on the 20th and 28th of Safar. Initially hostile, Singh allowed these jaloos which attracted devotees across Punjab to Lahore. Today, these are some of the largest mourning processions in the world, and the Walled City houses 367 Imambaragahs including Nisar, Begum Mubarak, and Alif Shah Haveli.

Nawab Palace, located on Empress Road, is the Muharram residence of some of these sacred creatures. In Shiite belief, once a horse has been associated with Murtajiz he is no longer considered a horse but a ziarat. "They become sacred, and they’re kept as sacred," says Babi bhai, the principal caretaker of the Qizilbash Zuljinnahs at Nawab Palace.

"They are usually bought as children, so they’ve never been ridden by a human. In our belief, an ordinary man cannot sit upon the steed of an Iman, even if it is an imitation," he continues.

The property has been with the Qizilbash family for almost a century now. The main residence is mostly unused. Its grounds house six to seven ziarats on average. "These are their city stables, where the zuljinnah stays for four to five months up till Muharram. They are provided for in every way; fodder, doctors, medicines, and we take each of them for a walk, around the Mall for one to two hours daily. The rest of the year, they spend on the Qizilbash Waqf land in Ali Razabad where they have ample pastures, land, and gardens exclusive for their use."

According to a caretaker, each zuljinnah has a trainer dedicated to him. These trainers and their families live and move with their zuljinnah.

Their daily consumption is estimated at 10 kg of fodder, consisting of channa, chaukar and green fodder, along with a large unaccounted-for amount of jaevi seed. "Their total costs including food, doctors, caretakers, and transportation can add up to Rs 6 million annually," says Babi bhai.

While the waqf under whose possession these zuljinnahs fall, receives donations, it is predominantly funded by the Qizilbash family themselves.

"They have to be trained differently from racing or carriage horses. They need a particular physical and emotional stamina. To be able to wear such heavy adornments, and move through large crowds in narrow spaces.

"The 9th Muharram jaloos is the toughest," Babi bhai adds. "Their entrance is the major ziarat and it is our responsibility that the zuljinnah and mourners are not hurt in the process. Emotions are running high, it is a strangely devastating and surreal time, but we have to stay calm; calmer than others. Our entire year is spent preparing for those ten to fifteen minutes. How will the zuljinnah run through a place that is overflowing with people? But it happens, and each year we’re left wondering how we managed.

"They are taken from here to the Imambaragah, we begin dressing the first zuljinnah as the majlis proceeds. Once he is ready, we give azaan and aqama’d in each ear -- as you do when a child is born. So the zuljinnah knows the purpose for which he was brought here. Then we show him the mirror. Remember, animals are more sensitive and have the ability to see what we cannot -- we see a riderless horse, through the mirror he can see who is sitting on him. I don’t know of other people who do this, but this has been the Qizilbash tradition for as long as we can remember."

"After this, the horse’s body language changes," pipes in a junior caretaker. "They walk as though they have a rider, their steps indicating that there is the divided weight of a person on either side."

As the procession goes along, zuljinnahs are switched after every few hours. Babi bhai attributes this to the weather, fatigue, and irritation that the ziarat may face. "We have to preserve their energy levels, and due to their heavy adornments they dehydrate easily. In the winters they would be fine for four hours, in humid weather we have to switch every two."

In Pakistan, all zuljinnahs must be registered and issued licences under which they must be granted police protection when in a procession. Recently, current and prospective zuljinnah owners have complained that the government has stopped issuing new licences. As Muharram moves to the summer season, changes between different zuljinnahs in a procession will become more frequent; requiring more licenced zuljinnahs.

A usual zewar set for a zuljinnah consists of 14 pieces, though some extend to 27. The nukta is the decorated face mask, jhumkay are for the ears, gardani, the line on studs along the neck, a necklace made of 12 leaves -- one for each Shia Iman, dhal and talvaar (sword and shield), kathi or saddle, mishri (headgear) and chhathri (shade) for the sacred rider amongst others.

Muhammad Mateen is the artisan located in Lohari Gate who makes the zewaar for the Qizilbash family. His father established their shop of silver and brass cutlery, whose market shrunk rapidly as cheaper mass produced alternatives emerged. Mateen redirected the family business towards Shiite sacred artifacts. According to him as gold and silver have become expensive, most zuljinnah zewar and other artifacts are now being made out of brass, washed with gold or silver. "Before brass it was German silver," he adds grimly. "If the prices keep rising, soon it’ll be steel.

"Our artisanship is inspired by our faith and love for the family of the Holy Prophet (peace be upon him). And I feel happy that God has granted me the honour of using my skills in this manner. I grew up in a Deobandi family, I am Sunni myself. Initially, I was hesitant; I had heard and thought all sorts of things. Is it right to attach such reverence to an imitation? Is it borderline worship? Till I saw how people interacted with these sacred objects; they weren’t worshiping the zuljinnah or the alam, it was respect for what they symbolise, and love for those they are associated with."

The belief that Shia Muslims attach to the miracles and powers of the ahle bayt is manifested in the sacred artifacts associated with them. There are many mannats and duas associated with alams, jhulas, and zuljinnahs. "My son’s name is Murtajiz," said Kulsoom proudly, wrapping her four-year-old around the zuljinnah’s hooves. The child solemnly bent his forehead against the unflinching knee of the zuljinnah. "I couldn’t have a child for eight years, then at this very jaloos, I prayed for a son that I may name after this chosen creature. Now I bring my Murtajiz for the ziarat of Hazrat Hussain’s Murtajiz every year."