On the International Day of Rural Women, they were celebrated globally for building climate resilience. But is it a resilience thrust upon them? 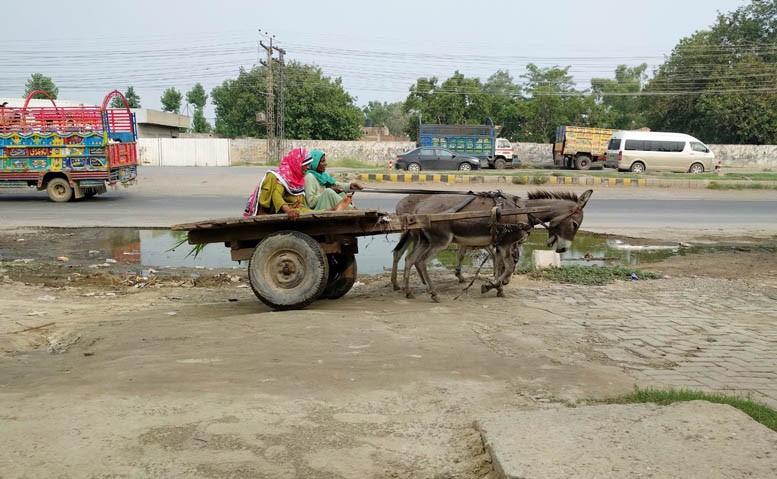 Resources for farmers in villages along Multan Road are drying up. The air hangs heavy with factory and vehicle smoke and dust, worse than in Lahore. The water available for irrigation and livestock exhibits varied patterns of availability. Rainfall patterns too have become unreliable.

I’m sitting on the roadside facing the Wires Manufacturing Ltd talking to young boys, farm labourers from Kot Asadullah, who work the farms at a neighbouring village. Two elderly women drive a bull cart past us, kicking up more dust in our faces. With the current state of the economy, the boys tell me, they feel hardest hit since there isn’t much to reinvest in farming inputs.

The story of how villages become industrial towns has been told before: the transformations involve introducing necessary infrastructures, a system of governmentality and an overall shift in the use of resources from agricultural purposes to industrial activity. What’s missing from this narrative is the story of villages that manage the impact of increasing encroachment by development and factories upon their daily lives without the infrastructures required to manage them. What makes this omission even more grievous is the now apparent impact of change and alteration of the chemical composition of soils in response to environmental degradation.

The story of the neighbouring villages of Chah Kalalanwala and Kot Asadullah, where I went for my research, is one such story.

After factories began opening up in the area in the late 1990s, farmers increasingly learned that their land had become uncultivable and their livestock were dying. Towards the end of the’90s, children in the village began developing bone deformities. This continued for nearly two years till the villages decided to take action and contacted a reporter working for daily Khabrain to investigate the situation. The media outcry helped frame the disaster as a national scandal forcing the state apparatus to descend to the villages and offer help: From former president Pervez Musharraf’s Clean Water Project to former chief minister Shahbaz Sharif’s Saaf Paani Project and in between them, the provision of a water tower, a tubewell, a hospital that opens from 11am to 1pm five days a week, medical camps, and promises to do more.

When I visited in 2016 and asked the residents what had changed for them over the last 20 years, they said most people who had lived there before the factories appeared had sold their land and left. Others had moved in to provide labour to the neighbouring factories only to find out that the nearest factories had stopped hiring labour from the villages. The water tower has not been operating for the past decade because the water it dispensed smelled foul and changed color if bottled. The tower casts a long shadow over the villages, a reminder of the way in which state nearly always mediates between rural communities and factories.

"Who do you think was blamed when my daughters were born with deformities? Not my husband who has a visible deformity, or even the factories. But me," a woman recalls.

The United Nations celebrates October 15 as the International Day of Rural Women, recognising their important contributions to ensuring the sustainability of rural households and communities. This year’s theme is Rural Women and Girls Building Climate Resilience. The UN recognises that 80 per cent of households without piped water rely on women and girls for water collection, and acknowledges that rural women are at the forefront of the battle lines when natural resources and agriculture are threatened. But, how can good people celebrate the resilience of those thrust into conditions not of their making?

When I visited the villages over summer this year, I was interested in parsing systemic vulnerabilities: how do already disadvantaged communities deal with deprivations of such scale? More specifically, how did women deal with the loss of livelihood, loss of mobility and the burden of running households without safe water supply?

Nearly all of my questions had the echo of one basic question: tell me your pain. And by the time I was done asking my questions, they had had enough.

"Every year, more than ten NGOs show up in our villages asking us to speak our pain, they take pictures of us make videos of our homes and they leave," an angry house wife said. "How can good people like you make money off of our pain? The politicians, the media, the NGOs and now researchers, you are all the same. You want to fix our pain? Take our conditions back to what they were before the factories showed up and polluted the water."

The water has been damaged for over two decades and no one can reverse that damage overnight. But this outburst comes more from a place of fear as I learned after she took me to her house and introduced me to her family. Her husband had worked at a factory in Pattoki. He was a teenager back in 1998 when his spine began to twist and left him with a visible hump and impaired mobility. She introduced me to her mother-in-law and sisters-in-law and then her children and their cousins. Two of her children, both daughters, aged a month-and-a-half and two years, were born bandy-legged and with severe mineral deficiencies that had led to other complications.

"Who do you think was blamed when my daughters were born with deformities? Not my husband who has a visible deformity, or even the factories. But me," she recalls. Her sister-in-law chimed in, "who will marry these girls?"

Looking at the women sharing these fears with the girls who can’t yet talk but whose marriages are already a matter of concern, I realised how far off point my questions and line of enquiry were: how is it moral to celebrate the lives and contributions of rural women in dealing with the increasing precariousness of their surroundings and their lives?

Like philosopher Slavoj Zizek mentions in a recent article, fears surrounding climate change are basically fears of a loss of our way of living and should be framed as such. When we see violence normalised into the lives of people through the dispossession of their faculties, limbs, livelihoods and future, we need to start asking better questions.

I abandoned my search for people’s pain and decided I would sit near the water filtration plant every day to observe what was happening. Nearly all residents of both villages rely on water from a tube-well that is filtered through reverse osmosis using solar power. It was donated by an NGO set up by the late singer Junaid Jamshed and runs from 11am to 5pm.

The filter plant was a site of intense activity and there was rarely a moment that children weren’t scrambling over each other trying to fill up huge bottles of water then hoisting them into wheel barrows and taking them home. Women would stand patiently and let the children jostle each other. They would talk in the meantime, swap gossip and news - the filtration plant had become the 21st century version of the watering hole: A place where lots of information and news was exchanged all day between women who also kept an eye on the children.

"Our daal cooks within ten minutes without a pressure cooker because that’s how corrosive the water is," one woman says to me.

"My hair has started coming off in clumps. I used to have beautiful hair before I got married and moved here a few months ago. Now I’m scared to have children," says another.

"Try laundering clothes with this water. You have no idea how often we have to get new clothes," another lady says to me.

We chat for a while, and the women let me in on the gossip -- who’s getting married, who’s holding an important milad at their house today, and who passed an important exam and wants to be a teacher.

They shrug when I ask about how they adapt to changing conditions.

Columnist Zarar Khuro wrote an op-ed a few years ago, in which describing what resilience looked like, he asked the readers to picture a battered wife, who before the next beating hopes that she gets away with a bruise and not a broken nose.

On October 15, rural women will be celebrated for living in spaces that are being increasingly altered through climate changes, pollution and development projects. UN will admire their resilience and teach the public about the harsh conditions they live in and laud their role in building resilient communities. I am reminded of the retort by the angry housewife: "you want to help? Take our conditions back to the way they were before the factories came".

As citizens of a country that is the seventh most impacted by climate change, we can ask better questions. Better yet, we can dump the charade of being resilient, of celebrating life in death zones and lauding women and girls for living in precarious conditions not of their choosing.