We’ve been waiting for you - Performance art at its finest

11 artists using their bodies as a medium, presented ten art pieces that were as powerful as they were intense 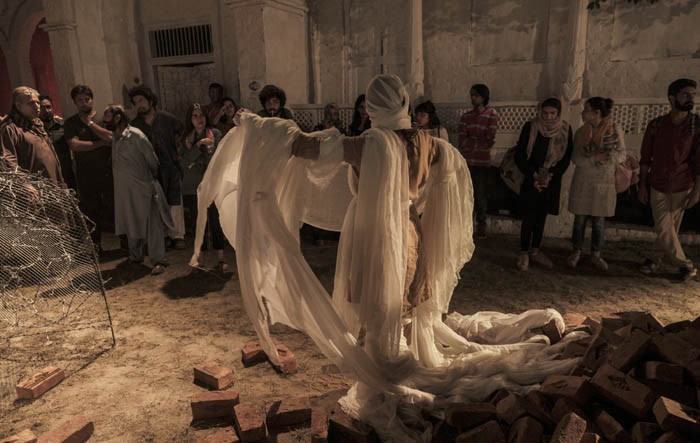 The woman in chains greeted every visitor, albeit impassively, with her face slightly covered. She walked slowly, looked at everyone who entered with deep longing in her eyes, she waited. She managed to catch you off guard.

The fact that she moved around in her chains, or that she had complete authority to grab every seventh visitor and stamp them, was baffling. She kept at it for the next three hours.

"Every seventh person who is given a death sentence in the world is a Pakistani," says Lahore-based visual artist, Mariam Waheed, about her piece Mulaqaat, which was a part of the performance art exhibition held at the historic Bari Studios on October 10 in Lahore. "I stamped every seventh visitor to the venue with the same fate as those people and by doing so, I tried to humanise them," she continues.

We’ve Been Waiting For You, a performance art exhibition that took place on the World Day against Death Penalty, was a collaboration between Justice Project Pakistan (JPP), Highlight Arts, and House Limited. Curated by Natasha Jozi, it saw 11 artists using their bodies as a medium to present ten intense yet powerful performance art pieces. Last year, it was the exquisite No Time To Sleep, an ambitious and powerful performance art event that saw Khoosat portray Prisoner ‘Z’ aka Master Jee, locked in isolation, in the last few hours before his execution. Keeping the energy going, this year the larger theme was still capital punishment, but since it was a multiartist event it diverted and went off in different interesting tangents such as power, isolation, and systemic control over life and death.

"All of the performances were borrowing from themes such as death, isolation, power, pain, capital punishment, or being a prisoner of your thoughts, or the prisoner of the process, or the society, dealing with the idea of control or power," says Jozi.

Performances such as Ahmed Khan’s Shadow of the Night and Haider Shah’s Resuscitate explored themes surrounding the sublime reality of death and how ridiculously frustrating the criminal justice system and bureaucracy in this country is.

The participating artists responded to the larger theme in wildly varying ways. Among the standouts, was the quietly grave, thoroughly devastating The Birth of Debris by the Afghan artist Baqer Ahmadi. It began with Ahmadi washing bones, cleaning them and then joining the bones to each other with the help of a rope, as if trying to make a coat out of the bones. He took off his overcoat, put it aside and promptly replaced it with the bone coat he made. "The black overcoat presented the social/historical skin that I took off. I replaced it with bones. My idea was to represent people suffering from political and social repression," says Ahmadi. At its peak, Ahmadi took the aesthetically provoking performance to the audience, in the shape of a slow, excruciating walk, perhaps as excruciating as death itself. He called it the ‘death walk’. "For political, social and economic suppression will only result in more death instances hence more broken bones," he says.

Only slightly less somber, but equally forceful was the Lahore based artist Fatima Butt’s You Melt My Heart Into Bits And Pieces. I was mesmerised from the moment I entered the room where the performance was taking place. A stack of huge ice blocks on the floor, clear vases of different sizes but full of ice on the mantel, a large inflatable pool in the middle of the room in which Butt sat nonchalantly, pieces of ice carefully placed on her legs, slowly melting away, turning into water. A startling image of hope in the process of gradual collapse, this performance was as exquisite as it was heartbreaking.

A transgender person’s struggle in this society was depicted by the masterful Ahmed Khan in the disturbingly real Shadow of the Night. The mighty performance saw Khan alone in his room, dancing his despondency away behind closed doors in a world he has carefully created for himself, hidden from the harshness of the society, building up impossible dreams. Hamna Khalid’s Sink was another performance worth mentioning, where she sat in a pool of mud, aggressively looking for something she’d lost, or maybe had never found. She seemed aware of the fact that she was sinking, but she kept at it anyway.

Performances such as Kanwal Tariq’s The Shape of Things to Come and Haider Shah’s Resuscitate explored themes surrounding the sublime reality of death and how ridiculously frustrating the criminal justice system and bureaucracy in this country is. In a hauntingly beautiful performance; Khurram Gillani in Stuck in the Middle brought life to the themes of hopelessness and resignation to one’s fate. "I looked at the impact on today’s youth being a part of a volatile society, their decreasing self-worth as a result, and the way they gradually become invisible in the society." Nayyab Naveed was beyond convincing in Bare, Barren, Barbed, exploring captivity, freedom and struggle.

Ryan Van Winkle, the creative director of the event, says that initially they wanted to make "a live art haunted house". "Obviously, I had no idea then, what that might actually look like but fortunately enough Natasha [the curator] and her team of brilliant artists saw the vision and took it to the Next Level." Winkle, who’s also a poet, says that the artists did a tremendous job of engaging with the material in a sensitive, thoughtful, and empathetic way. "They made something real which was better than I could have ever imagined."

This was a show that was as diverse as it was intense. A powerful compilation of nerve wracking, mind blowing performances that will probably stay with the audience for a long time to come. It also saw an ecstatic audience from all walks of life, something that Jozi wanted for her art exhibitions all along. "In order to have a wider audience for art, you need to bring your art to them, rather than exhibiting it in an art gallery, expecting the audience to come to it."

But can an art form as novel as performance art help create awareness about a theme as controversial as capital punishment in a country like Pakistan where people might take some time to come to grips with the nuances of this art form.

According to Winkle, "people do ‘understand’ poetry or art, they just tend to lack confidence in feeling like they understand it. So, my goal is to make the audience feel comfortable to receive the work without taking away the artistic quality." He thinks that art has the ability to help us navigate a complex world. "Images stay with you long after the performance is over. So, I imagine one day someone will read about an execution getting stayed, immediately thinking of those artists cutting that giant net [Aisha Ahmed & Waleed Sajid’s Can I Braid Your Hair Tonight?] or they’ll read about a hanging, picturing the man covered in bones stalking the venue [Baqer Ahmadi’s The Birth Of Debris]."

Ali Haider Habib, the Content and Communications Specialist at JPP agrees. "Last year, we managed to ignite a debate about those aspects of capital punishment that are generally not brought up in conversation. Nobody wants to dicuss the fact that it’s usually the underpriviliged who end up on death row, or the injustice that the death penalty can perpetuate in a country like Pakistan.

But, if we somehow managed to make even one person reflect on this issue, I think it served our goal."

While I was at the phenomenal Can I Braid Your Hair Tonight, I overheard a passing group of people, who seemed mesmerised by the sight of Ahmed and Sajid breathing life into the themes of power and control. It was 8:40 by that time and the artists didn’t seem tired.

"They [the artists] are putting their hearts and souls into this [performance]. We should look more deeply into the things that they’re talking about"

Maybe that is the sense art can bring to a world that has stopped making sense.

We’ve been waiting for you - Performance art at its finest