They christened it Youhanabad, Phase II 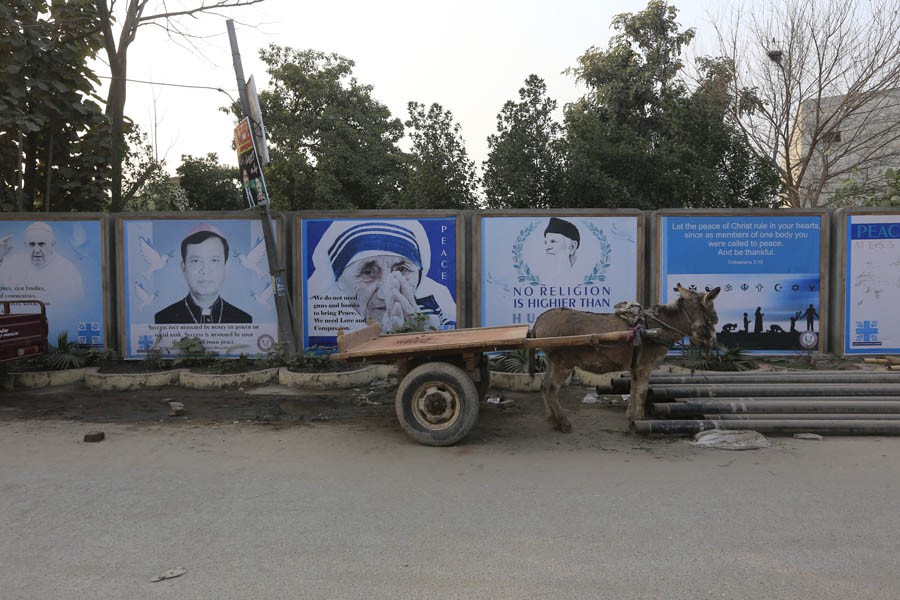 Youhanabad is the largest Christian locality in Lahore -- with a population of around 150,000. It is stretched over two kilometres along Ferozepur Road. It was founded by Fr Ferdencial, a Catholic missionary, in 1965. Later, Fr Henry was asked to take up the development of the area.

Most of the plots allotted in Youhanabad measured five marlas. In 1970, the place was home to only a few Christian families. The rest of the land was used for agriculture. Later, a number of Christians, looking for freedom of religion and a communal living, inhabited the place. The Catholic Church offered them plots on easy installments, and also provided materials for building homes.

Rapid growth of population forced the local church to acquire more land. When there was no land left to cater for a greater number of people, the church purchased a piece of land near Buler village and christened it Youhanabad Phase II. More People came around and built their homes. Today, the Muslim community owns more land and shops in the locality.

The Phase II was declared "a modern village" by the then president, Gen Pervez Musharraf. DHA is now set to acquire the land in the area. Unfortunately, there is hardly any facility for the Christian residents of Youhanabad, just a few steps away.

So, what are the reasons why Youhanabad has seen no development? Do the authorities concerned have any uplift plans? These are million-dollar questions.

Interestingly, Youhanabad has been a part of the constituency that returned former chief minister Mian Shehbaz Sharif. Yet, it looks like a katchi abadi.

It is said that for the previous local elections, Youhanabad was divided into two parts. Union Councils 145 and 146. As a majority of its population is Christians, in the local body elections, the main seats were won by Christians candidates. Meanwhile, Muslim inhabitants control the local businesses and run many shops. A pleasant feature of life here is that followers of both religions coexist peacefully.

A considerable number of residents in Youhanabad are employed in the government sector. Most of the men work as labourers. Besides, the number of women working as domestic help is also quite large. Locals’ only grouse is that the government has not taken any initiatives for development of Christian localities, in terms of basic health facilities, education, road infrastructure, and security arrangements. There are no parks, the roads are broken at most places, streetlights are either extinct or non-functional, and sewerage gutters overflow as a routine.

The government has not taken any initiatives for development of these Christian localities, in terms of basic health facilities, education, road infrastructure, and security arrangements. There are no parks, the roads are broken at most places, streetlights are either extinct or non-functional in main parts, and sewerage gutters overflow as a routine.

There is general dissatisfaction over the contribution of the local, provincial and national-level politicians, with regard to provision of basic amenities for the Christian community. Rev Faraz Malik, Pastor In-charge, Abraham Presbyterian Church, Youhanabad, says, "Visit any Christian locality -- be it Marian Colony, Joseph Colony, Nishat Colony, or Bahar Colony -- and you will see that the living conditions of the common man are poor."

Justin Patrick, a civil engineer and town planner, insists that any residential colony which is built on 70-75 kanals must have a 50-bed hospital, a public park, a graveyard, a community centre, and primary as well high schools. "This is the minimum requirement," he says.

"Secondly, such a locality must have proper roads and link roads, with street lights, and footpaths."

He adds that there should be "an adequate sewerage system with manholes that are maintained properly, in accordance with the guidelines provided by the Public Health Engineering Department. There ought to be an overhead water storage tank and a water filtration plant so that water-borne diseases like cholera, skin ailments and hepatitis can be prevented."

Patrick also speaks of "underground electricity distribution, in order to avert fire or other damage.

"In an area with a big Christian population, a boundary wall must be built for the safety of the residents who have been easy targets for miscreants in the past. The government must install security cameras around the churches."

Samuel Payara, Chairman, Implementation of Minority Rights Forum, says it is high time the government followed the Supreme Court judgment of 2014 that talked about setting up minority rights commissions at provincial levels in order to address their concerns and issues.

"The judgment required of the government to ensure the security of churches across the country, but so far only Balochistan has set up such a commission; the rest of the provinces are desisted by what they call a lack of funds."

Tahir Khalil Sindhu, Chairman, Standing Committee on Human Rights and Minority Affairs, says that in the tenure of the previous government, development funds were allocated to Kamran Michael, who ensured their equal distribution to all Christian localities. Youhanabad, which needed a major share in funds due to its size and population, remained neglected.

He admits that Youhanabad is one of the largest Christian-dominated localities in the country and, therefore, must have all the basic needs of life.

Talking to TNS, MNA Rana Mubashir Iqbal said he was able to get the gas pipeline of approximately 19 kilometres length in Youhanabad, and several projects related to roads and sewerage that are worth Rs 500 million. When asked about the educational facilities he said, "Although there is a government school in the adjacent Asif Town and Nishtar Colony, the government must set up at least one high school in Youhanabad.

"Presently, there’s little vacant [state] land in Youhanabad but the government can find ways to overcome this hurdle," he added. "Youhanabad is so big that it has been divided into two union councils."

Ejaz Alam Augustine, Minister of Human Rights and Minority Affairs, says that the government wants to develop Youhanabad into a "modern village." In this regard, a contract worth Rs3 million has been awarded to The Urban Unit and The Walled City of Lahore Authority, for survey.

The development work involves construction of roads, laying of sewerage pipes, and provision of electricity to every household. The Parks and Horticulture Authority (PHA) is also expected to be a part of this project.

Augustine says that the government is looking for land to build a Basic Health Unit (BHU) and a school for the residents of Youhanabad. "Land is the major issue at present. The reason for this is that no land was allocated for these purposes when the locality came up. Also, it [Youhanabad] was not approved by the Lahore Development Authority (LDA) at its inception."

He adds that the former chief minister of the Punjab, Mian Shehbaz Sharif was elected as MPA from Youhanabad, but ignored development work in the locality. The current government has approved a grant of Rs 250 million for the development of the area, he says.

They christened it Youhanabad, Phase II