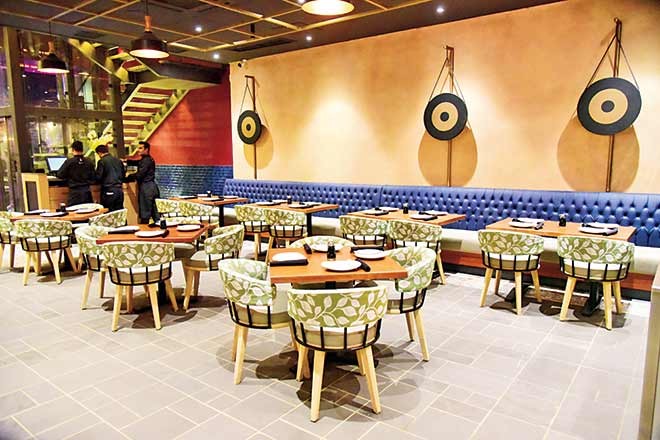 Having made a mark across the globe with their Pan Asian cuisine, renowned food chain P.F. Chang’s came to Pakistan last year, with their first branch opening in Lahore.

Last week, the eatery had a soft launch of their new, second branch in Karachi, which opened to public yesterday.

The outlet launched with a grand celebration. Starting with an Editors/Media Lunch, it was followed by a VIP Dinner with socialites and celebrities in attendance.

Founded in 1993 by Philip Chiang and Paul Fleming, where the name comes from, P.F. Chang’s is the first internationally recognized multi-unit casual dining restaurant concept to honor and celebrate the 2,000-year-old tradition of ‘wok cooking’ as the focus of the guest experience.

Today, P.F. Chang’s has more than 300 restaurants around the world including 25 countries and several United States airports.

We were invited to the exclusive media launch last week where we got an opportunity to visit the new outlet and experience the delicious food the restaurant has to offer.

Located at Comm-3, Bilawal Chowrangi in Clifton, the sprawling outlet is spread over a two-storey space.

"We’re very excited to open the second P.F. Chang’s in Pakistan. Ten years ago, we opened our first international location outside of the United States in Mexico City and since then we have expanded to 25 countries. It was time for us to bring the delicious flavors that have made P.F. Chang’s the leading Asian dining brand around the world, to Karachi," shared Genaro Perez, Vice President of Global Marketing for P.F. Chang’s – at the launch.

Perez revealed that recipes and ingredients remain similar in all of their restaurants worldwide. However, there are variations in spices, depending on people’s preferences. He also assured that the kitchen team is well trained and prepares everything from scratch every single day.

The Chicken Lettuce Wraps, chicken served on a bed of crispy rice noodles accompanied with lettuce wraps, is a winner. Right after serving it, Perez told us to make it according to our preference while he mentioned to add rice noodles to the wrap for crunchiness and he was right. The Dynamite Shrimps, lightly tossed with a Sriracha Aioli that followed were a treat for sea-food lovers.

Chicken Dumplings and the Salt and Pepper Calamari that I tried for the first time were served next and tasted good to me, because all the flavours tasted just right.

Moving on to the entrees, I tried Chang’s Spicy Chicken and Spicy Green Beans that weren’t spicy at all and the names were perhaps misleading, as pointed out by one of the servers himself.

However, the taste was amazing, particularly of the beans; they were crispy and cooked to perfection while the Spicy Chicken served with a Bowl of Rice was just as delicious.

I was reluctant to try out their Crazy Sushi Rolls assuming that it was raw fish as is the case most of the times but I was told it was fully cooked. I gave it a shot and it tasted fine to me. To be fair, since I am not a sushi person, it is not something I would try again.

My stomach was bursting by then and I couldn’t eat anymore but I do plan to visit them some other time to try their Mongolian Beef as well as the desserts. If you wish to taste the food, the Karachi branch is functional from 12:00 PM to 12:00 AM from Sunday till Thursday whereas on Fridays and Saturdays, it remains open till 1:00 AM.

Speaking to attendees at the launch, Wasif Munir, CEO P.F. Chang’s Pakistan, who also overlooks the Lahore outlet, said, "The reception of the first P.F. Chang’s location in Lahore has been phenomenal. Our guests have become huge fans of our signature dishes and drinks, and the expansion to Karachi is a part of the brand’s overall franchise development plans for this year."