Maulana set to hit the road? 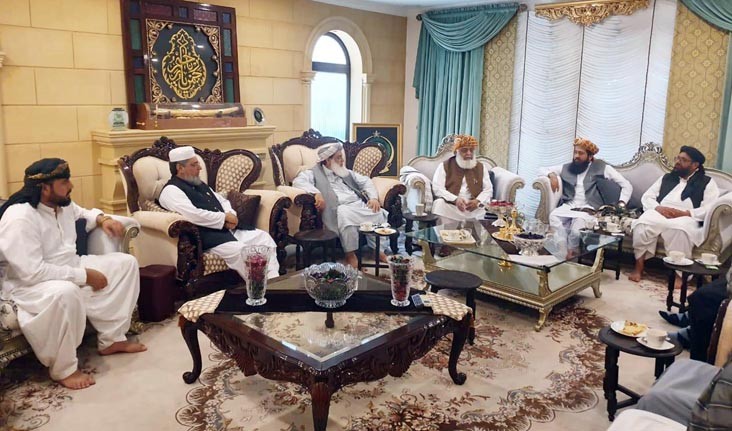 In his political career of 39 years, Maulana Fazlur Rehman has so far been successful in outmaneuvering, defeating and undermining his rivals inside as well as of his party -- the Jamiat Ulema-i-Islam (JUI-F). However, the success of his forthcoming Azaadi March on October 31, will be the biggest challenge of his career. His target, Imran Khan, has so far been the only threat to Maulana’s political power; defeating the cleric for the first time in the staunchly religious constituencies of southern Khyber Pakhtunkhwa (KP) in the 2018 general elections.

Since then, Fazlur Rehman has been the only politician who has consistently refused to accept the election results. Initially, his idea of launching a movement against the government was opposed by other opposition parties. Pakistan Peoples Party (PPP) and Pakistan Muslim League-Nawaz (PML-N) were concerned that an extreme action could threaten democracy and lead to an emergency.

However, now the Maulana seems determined to launch the march in October, despite advice from some allies to postpone it till the end of November or March next year. November would see off the first tenure of Chief of Army Staff General Qamar Javed Bajwa, while in March 2020, a fresh price hike is expected to kick in -- creating conducive environment for political agitation.

Fazlur Rehman is a shrewd politician. He must have been analysing the political marches since 1980. There has been a pattern in Pakistani political history; of a long march to Islamabad ahead of the fall of an elected government. The most famous marches in recent history have been: Benazir Bhutto’s proposed procession against Nawaz Sharif, which resulted in the dismissal of assemblies and collapse of the government in 1993; Qazi Hussain Ahmed’s march to the capital against Bhutto in 1996 and Nawaz Sharif’s march against Zardari for the restoration of judiciary in 2008. One of the worst displays of such power was during the recent tenure of Nawaz Sharif, when Imran Khan and Tahirul Qadri held their sit-in in Islamabad. Khadim Hussain Rizvi’s dharna has been the latest and most disturbing display of activism on the street holding the nation hostage. He laid siege to the capital, which resulted in blockades and causalties. These dharnas have become a notorious tool to blackmail political governments with. A few thousand unruly protesters can challenge the legitimacy of a government that millions elected; and the government may be quite helpless. Should the state crush such a powerful image of dissent? Should it use force against its own citizens?

Some of these marches and sit-ins make us look like a joke to the rest of the world. The Maulana, now 62 years old, is well-acquainted with the practice of pro-establishment parties. Although, considering the mess created by the Tehreek-i-Labbaik Pakistan (TLP), there is a possibility that the state will not allow Fazlur Rehman’s followers to proceed to the capital. In order to accomplish this, the government will likely block roads and arrest party workers and leaders. Ironically, the government will most likely be locking everything down in order to curtail the movement, especially in the KP. Hence even before taking to the streets, the Maulana will have made his point.

Although, the JUI lost the recent elections, under Fazlur Rehman it remains significant to Pakistani politics now and in the future. However, he is taking an immense risk in proceeding with the Azaadi March single handedly. If he succeeds in dislodging the PTI, he may have a rare strong claim to the prime ministership. A failure will weaken his political power.

Here, it is imperative to analyse the power that Fazlur Rehman wields. He is now the undisputed king of the Deobandi school in Pakistan, which is predominant in KP and Balochistan. This was not always the case. In fact, he was initially not even accepted by a majority of the Deobandis. The Deobandis - who follow Hanafi interpretations, with a proclivity towards Saudi Salafism - are sharply different from the shrine-going Barelvi school.

Rehman had an early start in politics after the untimely death of his father, Maulana Mufti Mahmoud in 1980. The two significant Deobandi elders at that time -- Maulana Abdul Haq of Akora Khattak and Maulana Abdullah Darkhwasti -- did not accept the young Fazlur Rehman as their leader. For many years, Rehman was at odds with them; eroding their support through his steadfast leadership. The first to succumb to Rehman’s rising power was Darkhwasti, whom he out maneuvered by accepting him as the figurehead ameer of the party, while he himself became the powerful secretary general.

Next, he dealt with Maulana Haq who had taught at a Deobandi seminary in India, but founded a madrassah at Akora Khattak after the division of India. This madrassah was so revered by the Deobandi community that Fazlur Rehman himself had been a student there.

Haq is also considered the father of the Afghan jihad and the Taliban. The most infamous militant Afghan jihadi terrorist organisation - the Haqqani group is named after Maulana Haq. However, with the patience of a seasoned politician Fazlur Rehman slowly isolated Haq from other Deobandi leaders. He played the same game with Haq’s son and political successor; Maulana Samiul Haq, leading him into political oblivion. When Haq met his mysterious and unnatural death at his Bahria Town residence, his faction had no political seats.

His own party was also under serious threat from the militant Baitullah Mehsud. The Taliban began targeting JUI leadership for their democratic and constitution-abiding approach; even killing a few JUI stalwarts. Mehsud initially paid lip service to Fazlur Rehman, but soon made an attempt on his life.

Those who mistake Rehman for an ordinary madrassah cleric could not be more mistaken. He is known to be a master at the art of politics; with a gripping command on logic. Nor is he a boring mullah either. In fact, he enjoys a reputation for cracking jokes and quoting classical poets.

The Maulana can rightly claim all the glory for the status he has achieved. He alone deserves credit for the political achievements of his long career. Moreover, he has expertly facilitated his family members’ rise to power. His elder son, Asjad Mahmoud, is a member of the National Assembly; his younger brother, Attaur Rehman, is a senator. A civil servant brother is a serving deputy commissioner. Rehman has raised his family’s political and personal standing beyond what his father could have ever imagined. His party, the JUI, has been in power many times at the Centre as a coalition partner and enjoyed power in KP at one time, having their own chief minister.

Although, the JUI lost the recent elections, under Fazlur Rehman it remains significant to Pakistani politics now and in the future. However, he is taking an immense risk in proceeding with the Azaadi March single handedly. If he succeeds in dislodging the PTI, he may have a rare strong claim to the prime ministership. A failure will weaken his political power.

The most likely outcome of the exercise is that mass arrests and use of state activity against dissenters will benefit the Maulana and the opposition. Yet, the march will have fail in the eyes of the PTI in being unable to bring the government down. This will allow both sides to claim victory. The chaos of a mass street protest and possible loss of life are the cost the common man will bear.

Maulana set to hit the road?