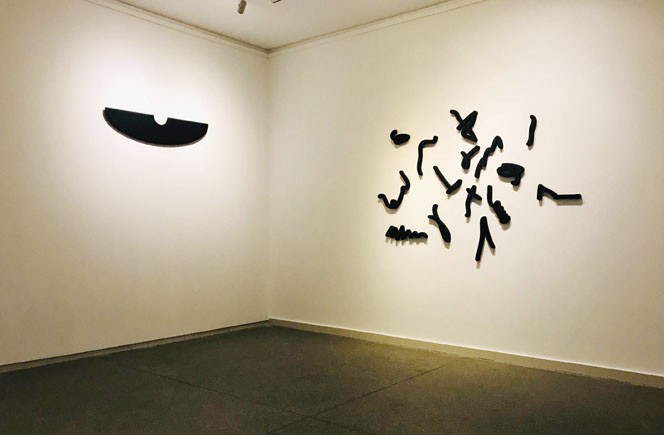 Language’s greatest association is with the spoken word, especially for those unable to read or write. For Muzzumil Ruheel it flows through his hands, much like the writers and calligraphers who speak through their fingers -- and eyes.

However, compared to a normal inscriber who moves only his fingers to express his ideas or present a beautiful layout of words, Ruheel employs his arms, body and a range of materials to write with.

The foremost function of language is to communicate. It is a bridge between humans to share concepts and ideas; a journey that sometimes ends up in fumbling and falling due to miscommunication, misreading and misunderstanding. Yet language remains a staple, due to its ability to provide an infinite number of interpretations and meaning. Even if one does not fully comprehend and read the entirety of a text, one is able to guess what is uttered or penned. In any case the readers or listeners are inferring their own meaning from the works of another person.

This passage between recognising and assuming, clarity and ambiguity, content and form is at play in the exhibition of Muzzumil Ruheel. Aptly named ‘Misunderstanding…’ the show consists of 13 works, executed in wood and paint, smartly installed at the Canvas Gallery in Karachi.

Not unlike his earlier work, the latest sculptures by Ruheel are embodiments of language. The mere fact that all these forms are covered in black and most of them displayed against the white walls of the gallery, hints at the presence of language -- words written in black ink on white paper. Some of these exhibits are easy to access compared to others which are abstract and esoteric in nature. For example, ‘Misunderstanding’ represents the Urdu word taqseem (division), spilt down the centre and separated in its placement on the gallery wall.

Or certain Urdu letters such as ‘Yey’ stuck to another, abstract in shape; and ‘Noon’ as a combination of three semi circles, lying on the floor.

Given the fact that language is loaded with meaning, once you strip it of its accepted function as a tool of communication, what is left to communicate through it?

The decision to put artwork derived from language is a daring one given that we live in a culture where it is almost sacrilegious for the written word or text to stay fallen on the ground. Perhaps by displaying language outside of its revered sacred context, Ruheel is indicating another intention -- to wrench words away from their usual meaning, while they are still a part of our vocabulary.

His work the gap in between is an example of this. Comprising shapes which seem to originate from letters and words, the forms are twisted, turned and transformed to such a degree that language seems to be a distant cousin, whom one never meets, yet of whose existence and relation one is aware.

This kind of work was also part of Ruheel’s production during the third Pioneer Artists Residency, held in Khushab early this year. Muzzumil Ruheel as one of the participants of the residency created a large-scale metal sculpture of the letter aleph in red, thrust in the earth.

A similar sensibility resonates in some pieces from the current exhibition such as Floating away, A fraction of it, This or this and It comes full circle. Here the abstraction attached to script is enhanced. Hence what we see is not a one dimensional fully formed letter or word, rather a three dimensional embodiment of language occupying space. Ruheel’s work also draws parallels with the aesthetics of Iranian born artist Parviz Tanavoli who creates minimalist sculptures based upon the Persian script.

Currently, Ruheel seems to be on an interesting intersection of his art practice. Should he pursue the path leading towards the ultimate incomprehensibility of his texts? Or should he embark on a journey down the path of depicting and illustrating readable forms, such as in his work misunderstanding. This is and would be a difficult choice for any artist, since there is a tendency to keep various methods and approaches at hand.

Either way, Ruheel’s task is a tough one. Given the fact that language is loaded with meaning, once you strip it of its accepted function as a tool of communication, what is left to communicate through it?

Something that can be sensed in Everything is here, a work different from his other sculptures. Instead of letters inscribed in a perfect calligraphic style, this work shows a line with jumbled up text, which cannot be deciphered but looks like a hurried and roughly written text. The paradox that makes the work interesting is that it is not a residue of loaded ink on paper, a matter of a few seconds, but a 92x19x1.5 inches sculpture fabricated in MDF and oil paint, which requires a few days’ labour and workmanship, notwithstanding the planning. Yet it disseminates the sense of spontaneity and urgency, that a scribble might.

The bigger and crucial contradiction lies in the way a viewer deciphers Ruheel’s work. Anyone familiar with the Urdu script and its various styles of calligraphy somehow figures out the origin of shapes in language, some words with meanings, others letters in different orders, but one is forced to ‘read’ these works through a lens provided by the maker; their titles. Titles such as What is this, What I meant was, Underlined, ‘It’s beyond you, Listen, Everything is here, and ‘Misunderstanding allude to the power, play and presence of language. Thus the viewer is guided to words through another set of words, this time relying on English to decode Urdu. While English has unarguably colonised our visual art and culture: here it is subjugating content embedded in a diction that is more widely used and easily understood.

Once Muzzumil Ruheel reaches a rationale behind this divide -- language based works and their titles; forms in ‘Urdu-ish’ and descriptions in English -- his work may arrive at a different, perhaps higher, stage. Till that time, I think all of us have to wait on the threshold of language. 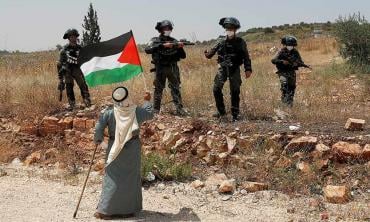 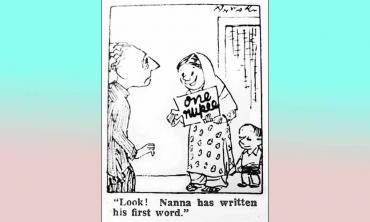 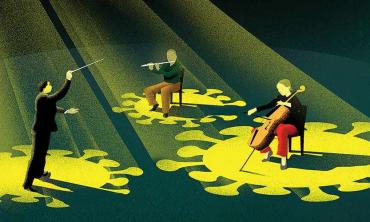