The afterlives of Qandeel 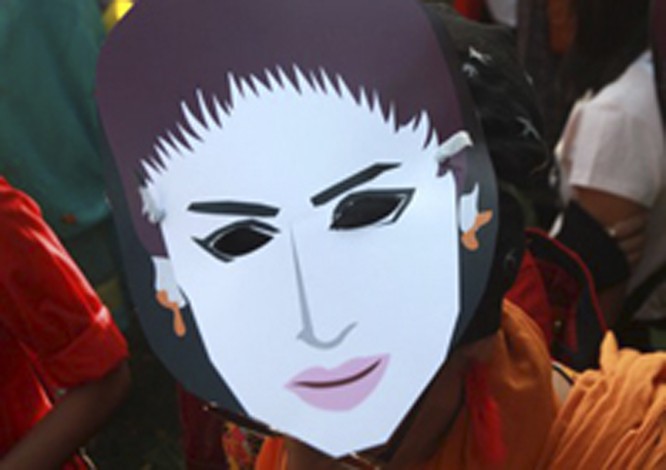 In death, Qandeel Baloch became a symbol for many things. For the women at the Aurat March, she was the transgressive Pakistani woman who defied upper middle class respectability and restrictions on women, a kind of woman who exists everywhere but rarely occupies public consciousness. They wore masks with her iconic image as a sign of resistance to patriarchal norms; some wore these masks to protect their privacy -- an irony not lost on those familiar with the fact that Qandeel Baloch was an alias: that she too, wore as a cloak of privacy. Beyond becoming the face of feminist resistance, a posthumous industry of media curiosity sprung up around her life, and the details of her murder. There have been documentaries, a television series and a book, and her voice was sampled in a song by a famous British-Pakistani rapper.

While Qandeel’s life was broadcast across television screens in the country, the details of her case did not garner similar public interest. For the past three years, away from the glare of the media, Qandeel’s brother Muhammad Waseem, along with Haq Nawaz and Abdul Basit, was being tried under Sections 302, 311 and 34 of the Pakistan Penal Code in relative obscurity. Waseem and Haq Nawaz were additionally charged with Sections 201 and 404 for attempting to damage prosecution evidence, that is taking away Qandeel’s mobile phones and for misappropriating her passport. Three other accused were charged with abetment to the crime. They included her brother Aslam Shaheen and the infamous Mufti Qavi. Another brother was declared a proclaimed offender since the authorities failed to produce him before the court as he had been jailed in Saudi Arabia for an unrelated crime.

Collective attention returned to Multan on September 23 when the verdict was delivered by a model court. While Waseem was sentenced to life imprisonment under Section 311, all the other accused were acquitted. The image of Mufti Qavi being showered with rose petals outside the courtroom was a disconcerting sight for many who felt that the court failed to consider the ample evidence against him, including public statements by Qandeel, call data record evidence connecting Qavi to the other accused and various confessional statements. Given the cultural importance that the case had acquired, the verdict was loaded with expectations for many of us who desperately wanted to believe that progress had been made: Qandeel’s death was not in vain.

‘Qandeel Baloch’ was an identity used to create a separation between the life she escaped and the virtual self in her videos. In June 2016, a month before her murder, her passport and ID card, bearing her real name and contact details, were leaked.

In many ways Qandeel’s murder has mattered. It served as the catalyst for the Criminal Law (Amendment) (Offences in the name or pretext of Honour) Act, 2016 which now allows judges to punish offenders with life imprisonment in cases of honour crimes if pardoned by legal heirs. Qandeel’s legacy also endures as she actively fought to challenge the notion of a victim in the eyes of the law. Her life, laid bare on the internet through her various videos on social media and interviews on prime time television, made it impossible to cast her in the category of the "respectable victim", a passive body upon whom violence is enacted. In order for the law to acknowledge Qandeel’s victimhood, it had to accept her on her own terms, a woman who asserted her active sexuality and was killed because of it. Deviant bodies are often disciplined by the various processes of the legal system; women who don’t conform to the standards of respectability are either forced to play the part of the perfect victim or forgo protections under the law. The judgment acknowledges that Qandeel was killed by her brother for her videos and selfies on social media, a fact that did not diminish the severity of the crime or make her less of a victim.

This case should also give us pause on how an exclusive focus on legalities and evidentiary requirements can obscure the material realities and inequalities which complicate the investigation and prosecution. Despite having nominated their sons in the initial police report and various public statements identifying them as the murderers, the financial pressures on her elderly parents meant that their resolve to get justice wavered as they could not support themselves. As the trial was drawing to a close, her parents filed an application under Section 345 of the CrPC to pardon their two sons. Honour crimes had long been among those that can be pardoned, as opposed to crimes against the state and society. While the 2016 Act did not apply to Qandeel’s case due to the bar on retrospective application, the interpretation by the model court bodes well for future cases.

The verdict in Qandeel’s case feels like a partial victory. Not only do some of the accused walk free, there has been no accountability for the role of the media in endangering her life. Qandeel’s identity was also violated in the lead up to her murder. ‘Qandeel Baloch’ was an identity used to create a separation between the life she escaped and the virtual self in her videos. In June 2016, a month before her murder, her passport and ID card, bearing her real name and contact details, were leaked, broadcast by television channels and even tweeted by senior journalists. Her veil of privacy, the flimsy protection she employed to negotiate violence from the patriarchs in her life, was torn down. When people from her village started to identify her as Azeem’s daughter and Waseem’s sister, a line was crossed. The right to anonymity in Qandeel’s case was a matter of life and death.

The afterlives of Qandeel