Peter Travers
In the picture
September 29, 2019 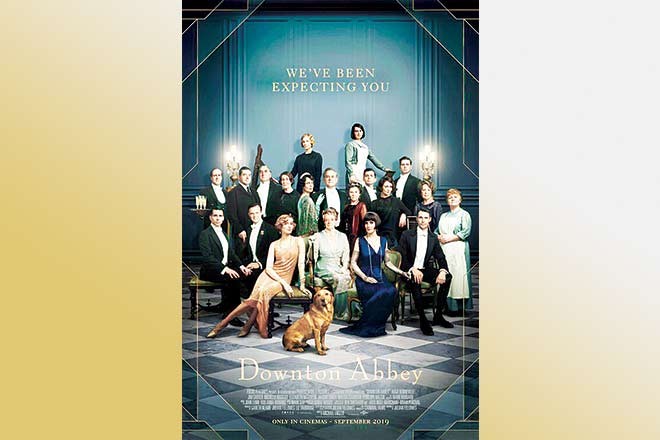 No need to kid ourselves: Downton Abbey is less an actual movie than a special episode of the very British TV series that Yanks devoured like crumpets for six seasons from 2011 to 2016. Still, it’s fun to see the old gang again. As soon as John Lunn’s Emmy-crowned theme kicks in, the film version, written by franchise creator Julian Fellowes and directed by series vet Michael Engler, plays like old home week -- unless you’ve never seen a single episode, in which case the script might as well be written in Sanskrit. Newbies will lose their way at every turn. The filmmakers have no intention of playing catch-up.

A few things you need to know: The time is 1927, about two years after the series finale, and the Crawley family and their servants are all atwitter about a royal visit. It takes their minds off the fact that the estate has seen better days, what with cash being so tight and all. That’s why it’s such a shot to the spirit that King George V (Simon Jones) and Queen Mary (Geraldine James) will be lunching, dining and spending the night at Downton. There are also plans for a parade in which His Majesty, on horseback, will inspect the local troops. Lord Robert Grantham (Hugh Bonneville) and his American wife Lady Cora (Elizabeth McGovern) are taking the impending royal arrival in stride. As for Violet, the Dowager Countess played ever-so-deliciously by Dame Maggie Smith, she is not one to be ruffled, unless her friend Isobel (the ever-superb Penelope Wilton) provokes her.

The Countess is, of course, the grandmother to the imperious and sexy -- or is it imperiously sexy? -- Lady Mary (Michelle Dockery), who worries that Thomas Barrow (Rob James-Collier), the head butler, may not be up to the job. She implores his predecessor, the aged but beloved Carson (Jim Carter), to step in. As for her widowed brother-in-law Tom Branson (Allen Leech), the former family chauffeur and Irish revolutionary, he wouldn’t dare talk politics to the King and Queen. Or would he? Prayers may be needed. "I’ll put in a word," says the Dowager Countess, who apparently has friends in the highest places. Yet even she is clearly vexed that Queen Mary is bringing along her arch-enemy, lady-in-waiting Maud Bagshaw (the great Imelda Staunton), a rich cousin to the Crawleys who intends to cut Lord Grantham out of her will.

And if that situation isn’t fraught enough, check the servants quarters. The cook, Mrs. Patmore (Lesley Nicol), is trying to put up a brave front in the kitchen while her cheeky young assistant Daisy (Sophie McShera) doesn’t believe in kowtowing to royals. Everyone, including the unflappable housekeeper Mrs. Carson (Phyllis Logan), goes a little off form when they learn that a chef and servants from Buckingham Palace will move in and take over when the royals are in residence. As if the Downton staffers are incapable, or will take such an insult lying down! A revolt quickly ensues, notably when the servant Molesley (Kevin Doyle), confronts the royals at dinner. Also in the mix is an assassination attempt on the King, but that barely registers when compared to the internal uproar.

The actors have a ball with the fun and games. And you will, too, unless -- as noted -- you and the TV series have never crossed paths. Downton Abbey on screen is patently a work of fan service, something to delight the devoted -- yet even diehards may be annoyed at the lack of meat on the feature’s elegant bones. Each character makes a dutiful appearance only to disappear quickly, as if those in charge are merely taking attendance rather than giving the actors anything meaningful to do.

Dockery and Dame Maggie fare best, mostly because Lady Mary seems a natural successor to the formidable Countess when it comes to running things. The monarchy worshipers running things on this big-screen Downton may not have succeeded at creating a full-bodied sequel out of spare parts and good intentions. But for a few fleeting moments, they’ve returned us to a time of bygone glamor when class trumped crass and even treachery was sweetly done. You could do worse.