Food for the SOL 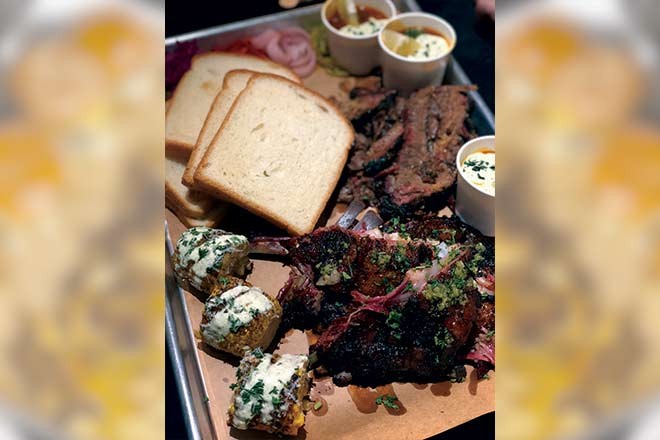 While I was in Karachi over the past week, I had my usual food trek of the city planned. Hitting all the spots my foodie friends recommend and making sure to try everything new on their respective menus is always on my list of things to do. Sol was a place that had acquired a name for its experiments at the Karachi Eat Festival in 2019; namely their butter beer and Korean fried chicken. Since their launch at the festival they’ve opened a small setup that everyone talks about as a low-key spot, not great for in-house dining but better to take home. When I got there on a Saturday evening, I understood exactly what they meant.

The owners Fahad and Salman have started a pop up operation a street away from E Street. The room where they serve food in definitely has a kitchen attached to it but the space looks more like the weekend hangout for ravers. It has a laptop, some speakers, a light installation and three tables - one wouldn’t think they take their dining experience too seriously but as the food arrives it’s a different story altogether - more on that shortly.

A casual glance at the menu shows quite a few options - briskets, tacos with smoked meats, Memphis ribs and its famous butter beer along with some nitro cold brew and Vietnamese iced latte - menu items that you are unlikely to find elsewhere.

Having tried the tacos from Taco Cat the night before and craving more, we ordered the taco trio as a starter. While the platter of three had a lot of variety to offer, it fell short of our expectations. The meat was good on its own but the tortilla had something amiss. The steak fries, also ordered as a starter, deserve a special mention - thick cut fries tossed with smoked meat and jalapenos and cheese.

The mains had a selection of burgers - the Smoky Jo which was a smoky brisket burger, the OG - with a smashed patty and the Hot Mess which had the former with pickled peppers and smoky jam. The brisket also had a pronounced earthy flavor of oak wood which they got from smoking it for 14-20 hours. All three had a delicious flavor of their own and the platter was served with the crispiest hand cut fries, pickles and veggies which kept us sitting around the platter and enjoying the food for a while.

The Memphis ribs, which were the highlight of the night, were a slow smoked rack of mutton ribs with fall-off-the-bone, glazed meat. It was served with smoked sweet corn, rubbed with spice and lime and the two made for a great pairing with the flavours of the meat being offset by the sweetness of the corn. The BBQ pinto beans served alongside were a bit of a letdown, slightly more runny than I’d anticipated but with meat that great, it was easy to ignore a small side of beans. The owner also sent a complimentary Mississippi Mud pie to our table and that too was melt-in-the-mouth good.

The two items on the menu that are Wednesday and Thursday specials and are equally talked about are the Pastrami Sandwich and the Meatball Sub which I’ll have to go back for on my next trip. To sum up, the Memphis ribs, brisket and fries are definitely worth trying and the prices and portions are reasonable. Sol is definitely the only restaurant around E street that will amaze you with its food in this manner.

Food for the SOL