Evacuation strategies, fire-safety mechanisms, easy accessibility of hydrants, fire control, and longer egress times and distances are some of the challenges that come with building high-rises 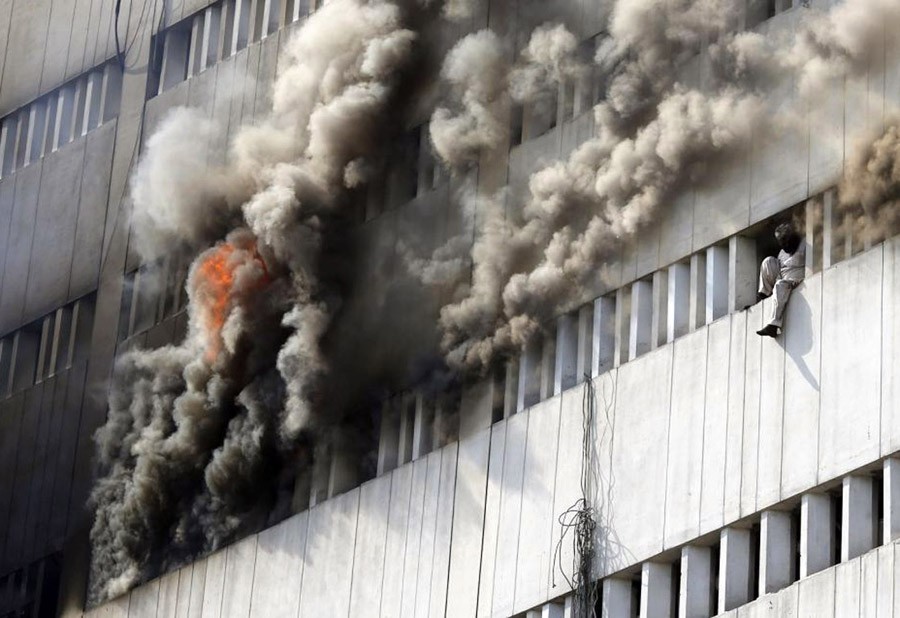 On May 9, 2013, a fire erupted on the seventh floor of the LDA Plaza on Egerton Road, rapidly spreading to top floors, and leaving many people trapped inside. The incident took 23 precious lives.

Many of us still remember the heart-wrenching scene of a man jumping from the seventh floor, trying to escape the fire, and losing his life there and then. Two others who followed suit also succumbed to injuries at a local hospital.

What was most ironic and sad was that the very Lahore Development Authority (LDA), which is also a regulatory body and supposed to ensure fire-safety standards in buildings that fall within its jurisdiction, failed to take care of its own plaza -- it turned out that the building had no fire exits.

The incident also exposed the inefficiency of all concerned departments in dealing with emergencies in high-rises. A recent notification by LDA to allow and promote high-rises in residential areas has recalled the tragic incident. People are looking at the notification with doubt.

Lahore, widely considered to be the heart of Pakistan and an abode of more than ten million people, is fast becoming a mega city. Nonetheless, building high-rises that are absolutely safe from fires, explosions, terrorist attacks, even earthquakes and other natural calamities is not going to be easy. Handling emergencies in high-rise structures requires unique planning and response. It is not clear if Lahore is ready to counter emergencies associated with high-rise buildings.

"Unfortunately, ever since the LDA announced the amendments, people have been worrying about the height factor only," says Sheikh Mohammad Irfan, the LDA vice president. "They are overlooking the fact that high-rises are the need of the day. Besides, they [high-rises] have always been allowed in the city. The only difference is that now we have allowed them in residential areas, and that too in areas that come under LDA’s jurisdiction.

"Today, the owner of a ten-marla plot can also construct a high-rise building," he adds. "Previously, three-storey buildings were the norm. We’ve allowed buildings to go up to four storeys. Secondly, earlier anyone who had a four-kanal plot could construct a high-rise; which is why we have seen so many high-rise buildings in the city -- be it in the Walled City or developed areas like Gulberg. We are trying to empower the middle-income group [of people]."

While the possibilities of other emergencies in high-rise buildings cannot be ruled out, they have garnered considerable attention in fire safety over time.

Irfan urges the people to go through the amendments thoroughly before passing a judgment. "We’ve made fire safety measures mandatory for the approval of a building plan. These buildings will be used purely for residential purposes, and no commercial activity shall be allowed there.

"Another point that calls for popular attention is the issuance of completion certificates. We won’t issue a completion certificate until and unless the owner has got the building insured. This is to ensure that the affected people get due compensation in case some untoward incident happens."

Irfan also speaks of LDA as having taken on board all the relevant departments such as Punjab Emergency Service (popularly known as Rescue 1122) and Civil Defence: "They have been kept posted on the preparations made and resources required to deal with emergencies."

Rescue 1122 is one of the leading humanitarian agencies established under the Punjab Emergency Service Act 2006. Talking about its preparedness in dealing with emergencies that might arise in high-rise buildings, Farooq Ahmed, a spokesperson for Punjab Emergency Service, says, "Rescue 1122 is fully equipped with all the latest equipment to deal with any sort of emergency or disaster irrespective of the height of the building and nature of the incident.

"With particular reference to [Rescue 1122’s] capacity to deal with possible emergencies in high-rise buildings, we currently have two snorkels that reach up to more than 300 feet and 200 feet. They can be used as cranes also. Each one of these has self-contained breathing apparatus and thermal image cameras. Usually, fire-fighting vehicles have the ability to detect smoke but a thermal image camera has the ability to sense and check the intensity of the heat as well."

Ahmed also talks about a "turntable ladder (TTL) that goes up to 95 feet, and one aerial platform vehicle that can go up to 65 feet. These are used at places where large vehicles can’t go to fight a fire. We also have 20 regular fire vehicles that can respond to fire emergencies."

Additionally, Rescue 1122 has 10 vehicles equipped with latest paraphernalia to cut iron or concrete in the event of a building collapse. Other than Rescue 1122, only Pakistan Army has such high-quality equipment."

According to Ahmed, Rescue 1122 has thrice performed evacuation exercises at the Arfa Software Technology Park, the tallest building in Lahore. Evacuation exercises have also been carried out in other major buildings in the city. While the possibilities of other emergencies in high-rise buildings cannot be ruled out, they have garnered considerable attention in fire safety over time.

Every building must include fire safety measures. Ensuring that this happens to be the responsibility of concerned departments. Mazhar Bashir Bhatti, a shift in-charge at the Lahore Fire Brigade Department, claims the department has "all the capacity and resources to douse fires of any nature. No doubt the construction of new roads has lessened the number of hydrants in the city -- a few were destroyed in the way of the Orange Line [Metro Train Project]. All this has made our work a bit complicated. Yet I don’t think that high-rise buildings mean difficulties for our department or that our efficiency will suffer."

High-rise buildings come with certain unique challenges -- evacuation strategies, fire-safety mechanisms, easy access to hydrants, fire control, and longer egress times and distances, etc. It is hoped that the builders of multi-storey structures will not only ensure that all safety standards are met, but also that any emergency can be met in no time.