Good groove of the prodigal son 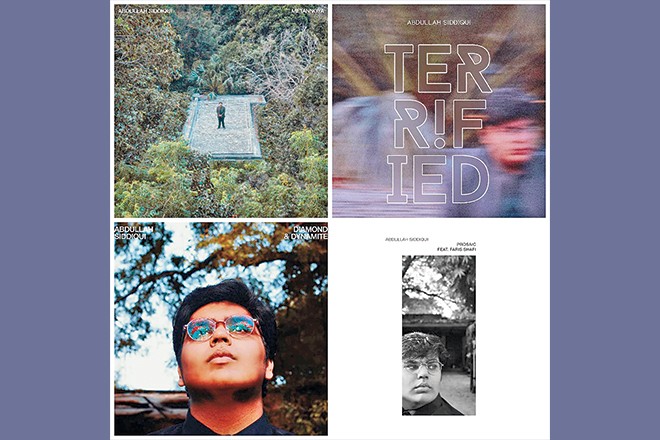 Abdullah Siddiqui, a singer-songwriter and musician, originally from Lahore and currently in the USA, speaks to Instep about working with Fawad Khan, his new album Metannoya, and why he is choosing to release a full-length album.

When Abdullah Siddiqui, a teenage prodigy from Lahore first arrived on the scene as a musician, no one could have predicted that he’d release an album and in doing so carry the hope to inspire his predecessors and peers to do the same.

The 18-year-old tasted fame with ‘Telescope Heart’ and ‘Fiction’ with the latter having fetched him a Lux Style Award nomination. But the success didn’t go to his head. Abdullah Siddiqui continued to work quietly because he is not a rabble-rouser who spends his time on Facebook and social media.

Siddiqui followed up ‘Fiction’ with ‘Resistance’ - a song that took him to Nescafe Basement 5 - and even in a band setting, Abdullah Siddiqui delivered. The original ‘Resistance’ version led to a second LSA nomination. The singer-songwriter and a pop musician for the millennial generation, Siddiqui has developed a reputation for being a prodigal musician.

From making his debut with net label Forever South (FXS) to appearing on Nescafe Basement 5 to Pepsi Battle of the Bands 4, he has worked hard to get to this place.

On Pepsi Battle of the Bands 4, Abdullah Siddiqui collaborated with Fawad Khan for his song ‘Uth Jaag,’ where the two worked on electronic textures you can listen to within the song.

Out with three singles (‘Terrified’, ‘Diamond & Dynamite’ and ‘Prosaic’ ft. Faris Shafi) at the time this piece was being written, Siddiqui had planned to release his album, Metannoya, on Sept 20, 2019.

The three singles, released within the last couple of weeks, were meant to promote the album in a way. But Abdullah confirmed past singles like ‘Resistance’ and ‘Fiction’ were not being featured on the record. It looks like Siddiqui did not wish to live on past glory or be a one-hit wonder.

Currently in the USA, Abdullah Siddiqui spoke to Instep about a myriad of subjects including his latest release, working with Fawad Khan and why he is choosing to release an album instead of singles like many of his current predecessors, particularly in the mainstream.

Instep: How would you characterize your new album, Metannoya?

Abdullah Siddiqui (AS): The name Metannoya comes from a combination of the words ‘metanoia’ and ‘annoy’, basically referring to the discomfort of growing and changing. It’s an album that explores many different facets of adolescence. ‘Prosaic’, for example, is about recognizing your own privilege when you’ve been raised in a sheltered life that was calibrated for your needs. There’s another track called ’Sober’, which talks about the pressure, loneliness, self-righteousness and fear-of-missing-out that arises from being the only one in a social setting who is not on some kind of inebriant.

Instep: Did you anticipate the strong positive response to your songs?

AS: I did kind of anticipate that ‘Prosaic’ would be received positively because Faris Shafi is a genius. His following is so devoted, and I knew they would like the track, because, if nothing else, his verse is incredible. ‘Terrified’, on the other hand, I did not expect to do as well as it did. I was particularly excited that it got to number four on the Patari charts, and stayed in the Top 20 for four weeks. While the Nescafe version of ‘Resistance’ did chart, I was more excited about ‘Terrified’ because it was a completely independent release, and didn’t have the Nescafe powerhouse backing it.

Instep: You worked with Jamal Rahman and Zulfiqar Jabbar Khan, better known as Xulfi, during Nescafe Basement 5 stint. What was it like working with Fawad Khan? Was there pressure to deliver something extraordinary and how did it work?

AS: It was genuinely surreal. Xulfi called me into his studio one day and I had no idea what to expect. We had a short conversation before he just went and dropped the bomb and said ‘Fawad Khan is coming here right now and he wants to work with you’. I was stunned. I got to work with Fawad, Xulfi and the band for about a week, and it’s a creative process that I won’t ever forget. It’s one thing to be creating music in your bedroom, but it’s a whole other thing when you’re working with these legends of the entertainment industry, and they’re actually listening to and using your ideas. I even got to sing a little on the backing vocals. I’d never sung in Urdu before, so that was a little daunting. But it was all just really satisfying, and I’m so proud of the result. I had an exam the day of the shoot, so I couldn’t fly out to Karachi to be in the video. But it’s no less unbelievable to me that I produced a song with Fawad Khan.

Instep: What Is ‘Terrified’ about?

AS: ‘Terrified’ is about social anxiety. It’s actually one of two songs on the album about social anxiety; the other one is called ‘Party Trick’. It’s a song about wallowing in the fear of inadequacy to the point of total paralysis. So many of us just don’t want to interact with people because we fear we’re a nuisance to them, and that we don’t have the social skills or social currency to deserve good friends. That’s always been a battle for me, and I was really happy that, with this new material, I was able to de-intellectualize my songwriting process a little bit. Songs like ‘Resistance’ have really esoteric lyrics, but a lot of these new songs are super straightforward, and unequivocally relevant to my life.

Instep: You were collaborating with (polymath) Ali Suhail on one song. Is it still happening?

AS: Well, the song is complete, and I really love it. But it’s really Ali’s project, so it’s totally up to him if he releases it. I sure hope he does. I actually spoke to Natasha Humera Ejaz about the track, and she said she wanted to develop some choreography for it. Can’t wait to see if that happens!

Instep: In addition to releasing three singles, what is your game plan to publicise this album? Will it be available on multiple digital streaming platforms or will the album remain available on Patari exclusively? Are you being paid royalties for the exclusivity?

AS:  Yep, no royalties. It was a tough decision giving the album to Patari as an exclusive, but honestly what are the alternatives? Their practice of not paying musicians is deeply unethical to say the least, but people won’t care about this unless they value music. And they won’t learn to value music without platforms like Patari. It’s a Catch-22, but I think I made the right decision.

Instep: Good albums have a narrative. What is your narrative, meaning or a theme?

AS: It’s an album that explores adolescence from several different angles.

Instep: What kind of feedback have you seen so far?

AS: The response has been really welcoming, which is surprising in this age of internet vitriol. But I think Pakistani audiences are super receptive to the new.

Instep: Are you terrified or ambivalent about the response to the album?

AS: I think it’s pretty impossible to be ambivalent about the response to something like this, particularly when you’ve put your heart and soul into it. That being said, I also don’t let criticism dictate my sound and my work.

Instep: People, at least mainstream artists, do not release albums and with film music booming, it’s an even smaller possibility. How are you releasing a full scale album? The trend is singles. Independent artists do release albums but returns on it remain very small.

AS: That’s exactly why I’m doing it. My entire context for the experience of music is through albums. There’s no other format that allows you to tell a story as completely and cohesively. But albums are dying. And in this industry, there are no returns on anything. So might as well contribute to the revival of an art form you care about.

Good groove of the prodigal son