A fallen angel and a couple more angry birds 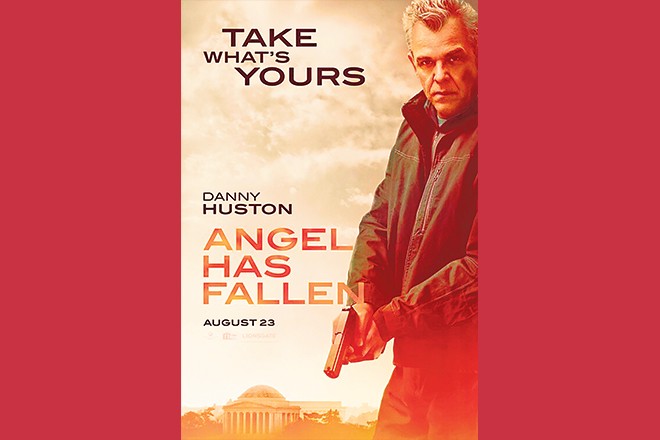 Tagline: The hero becomes the fugitive.

Olympus and London, it is now Angel’s turn to fall, as Mike Banning once again faces off against a horde of baddies in the third instalment of the Fallen franchise.

Gerard Butler reprises his role as the ridiculously skilled, seemingly superhuman Secret Service agent who has a knack for singlehandedly decimating droves of terrorists.

His job may be taking a toll on his body, but Banning is still protecting the President of the United States and might even become the Secret Service Director soon. He is still working and training hard - the film begins with the protagonist participating in an exercise at a private military facility owned by his friend, Wade Jennings (Danny Huston) - and is hiding his health issues from everyone, including his wife Leah (Piper Perabo, replacing Radha Mitchell).

Allan Trumbull (Morgan Freeman) is now the head of the state, and it’s his fishing trip that kicks off the action as things start to go very awry. A swarm of armed drones attacks and kills everyone in the President’s protection detail except Banning and leaves Trumbull in a coma. The FBI (led by a fierce Jada Pinkett Smith) finds evidence that links our hero to the attack. Vice President Martin Kirby (Tim Blake Nelson) announces to the nation that Banning carried out the assassination attempt with support from the Russians, and proclaims that the U.S. will retaliate against their old nemesis.

With both the FBI and the villains hot on his trail, Banning must prove that he was framed, clear his name, bring the actual culprits to justice, and hopefully stop an international skirmish.

Things unfold in all kinds of ludicrous ways as director Ric Roman Waugh puts his protagonist in one jam after another, creating a string of settings that lead to increasingly implausible chases and escapes. Then again, Banning’s adventures have always been preposterous, but there has still been a significant element of action-packed fun which helps explain the franchise’s continued existence. Luckily, Angel retains that entertainment value (and thankfully leaves the xenophobia of London behind). The action rarely ceases; and while you can pretty much figure out where things are going, the ride still remains enjoyable.

The arrival of Nick Nolte - who plays Banning’s off-the-grid recluse father with a couple of unexpected tricks up his sleeve - also adds some life to the drama, although for the most part, the film remains joyously unconcerned with things like depth and character development.

With its familiar premise and all-out action, Angel Has Fallen will basically please fans of typical, formulaic action thrillers, the kind that requires you to turn off your brain to fully enjoy the proceedings. Unsurprisingly, you won’t exactly be intellectually stimulated here, but you probably won’t be bored either.

The very unnecessary Angry Birds movie now has an equally unnecessary sequel. With a plot as thin as that of its predecessor, Angry Birds 2 offers another featherbrained adventure in a series that doesn’t really have any creative or artistic reason for its existence.

As the film commences, we learn that Red (voiced by Jason Sudeikis) has become a hero after the events of the first instalment (which you’ll surely remember because that movie was clearly so memorable) while the battle between the birds and the pigs still continues. But a new threat hits their islands when eagle Zeta (Leslie Jones), the leader of the nearby Eagle Island, starts pelting them with ice balls. She, it turns out, is tired of her frozen surroundings and hopes to drive away the inhabitants of the warmer isles so that the eagles can occupy them instead.

With their lands at stake, the birds - including Red, his speedy pal Chuck (Josh Gad), the explosive Bomb (Danny McBride), and Chuck’s smart sister Silver (Rachel Bloom) - and the pigs - including their leader King Leonard (Bill Hader), his assistant Courtney (Awkwafina), and inventor Garry (Sterling K. Brown) - are forced to form a truce, set aside their differences, work together, and - with a little help from Mighty Eagle (Peter Dinklage) - save their worlds from being destroyed.

It’s an agreeable enough premise, but the project simply lacks any sort of elegance or refinement and is devoid of the creative zest that could have made it special. It’s all very basic, unexciting, and utterly predictable. A side plot about a group of hatchlings trying to retrieve some eggs that they have accidentally set adrift is visually cute but fails to provide the amusement it hopes to deliver. The hatchling storyline could have potentially made a more enjoyable short instead of being forced into this film.

The Angry Birds Movie 2 is exhaustingly frenetic, stuffed with lame gags, and sound-tracked with an eye-roll worthy selection of songs. The voice cast is fine but the performances are hardly noteworthy. It’s enthusiastic, sure, but the film just isn’t entertaining enough to merit a trip to the cinema. It may sporadically amuse very young kids, but why subject children to this inanity when there are so many better alternatives on offer?

A fallen angel and a couple more angry birds