Drama serials to look forward to 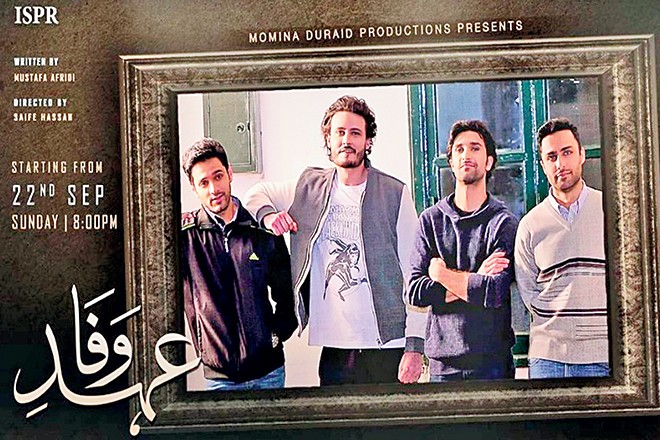 With many drama serials including Inkaar, Anaa, Cheekh and others coming to an end, there is an array of new and upcoming TV projects that are in the pipeline. While some, such as Humayun Saeed and Ayeza Khan-starrer Mere Pass Tum Ho, Mawra Hocane-starrer Daasi and Ali Rehman Khan-starrer Bewafa are already on air, others are expected to hit our TV screens in the coming days. With teasers of most of these upcoming dramas releasing, Instep gives you an insight on what to look forward to - based on what artists associated with these projects have to say.

Scheduled to go on-air tonight, Ehd e Wafa is one of the most anticipated projects; it has a unique storyline and the teasers look promising. Featuring Ahad Raza Mir, Ahmed Ali Akbar, Wahaj Ali and Osman Khalid Butt in key roles, the upcoming project follows the story of four young men as they receive training to join the Pakistan Army. A lot of people thought of it as a spin-off to Alpha Bravo Charlie but the team behind the project completely denies that.

Ehd e Wafa looks like a light-hearted and fun tale of these young men who are sure to make us laugh with their silly acts. It features Zara Noor Abbas opposite Osman Khalid Butt, who stars as Shahzain, a fourth-time repeater. Ahad Raza Mir, on the other hand, is paired with Alizeh Shah, who recently made her big screen debut with Superstar. Directed by Saife Hassan, the play is funded by ISPR.

The long-awaited Sajal Aly and Hamza Ali Abbasi-starrer Alif is soon to air on Geo Entertainment, though we haven’t seen any teasers yet (while this article was written). Produced by Sana Shahnawaz, the upcoming drama is directed by Haseeb Hassan, who shares that Alif is not a social commentary neither it is about religion.

"It is a very commercial project that viewers will definitely connect to; it caters to all age groups and genders," Haseeb Hassan told Instep, adding, "Alif is a journey of an individual who changes his path from wrong to right and vice versa. Hamza Ali Abbasi is essaying the role of a leading filmmaker while his roots lie in Turkey; his father and forefathers were calligraphers."

The director claims that the characters are written very beautifully. Sajal Aly will be seen as Momina Sultan, a struggling television actor, whose journey is very interesting while Ahsan Khan and Kubra Khan also play important roles in the project.

Coming soon on Geo Entertainment, Imran Ashraf and Neelam Munir starrer romance drama, Kahin Deep Jaley, is also on our list. According to the recently released teasers, the upcoming drama is a love tale with Imran and Neelam playing husband and wife. Apparently the two are very happy to get married but life is not as sweet as they had hoped it to be.

In a recent social media post, Imran shared a poster of Kahin Deep Jaley and wrote, "Emotional roller coaster romantic saga; not a run of the mill story neither run of the mill character."

He also stated that a small lacking can turn out to be a biggest barrier in a relationship, somewhat hinting at the conflict in the upcoming drama. Directed by Saima Waseem and written by Qaisra Hayat, Kahin Deep Jaley is produced by Asad Qureshi and Abdullah Kadwani under the banner of 7th Sky Entertainment.

Amidst multiple social issues being highlighted on the small screen, there is an upcoming drama serial - titled Ruswai - that has a serious social angle attached to it. Featuring Sana Javed in a key role, the teasers of the project portray a dark picture, hinting at the heinous act of gang rape. While we aren’t sure of that yet, we got in touch with Sana Javed for some insight.

"I am playing the role of a very headstrong, independent and cheerful young woman, who is family oriented," Sana told us, adding that her character is really close to her father, essayed by Mohammad Ahmed. "She is a doctor by profession and has been raised with a very open mindset where she is told to raise her voice against injustices and be honest."

Sana asserted that though viewers at times feel they are being fed with the same kind of content, she feels, it is really important to highlight topics that are considered a taboo. Ruswai aims to create awareness and convey that rather than shaming the victim, it is important to hold the culprit accountable so that others take some lesson out of it.

Directed by Rubina Ashraf, the drama serial features Mikaal Zulfiqar opposite Sana while Osama Tahir essays the role of her brother.

Iqra Aziz-starrer Jhooti, that is currently being shot, is named after her character who is a compulsive liar. She will be seen playing the role of Ahmed Ali Butt’s wife while the upcoming drama also features her real-life fiance, Yasir Hussain in an important role, which is a surprise for their fans. In a conversation with Instep, Yasir shared that it is wonderful as well as difficult sharing screen space with Iqra. The two will be seen together in a project for the first time.

"I’m playing an anti-hero; it is a grey character," he added, refraining to reveal more details at the moment. Iqra, on the other hand, introduced fans with a glimpse of her character Nimra in Jhooti via a social media post. "It’s a story of girl who believes money is all you need in this world," she wrote.

Drama serials to look forward to