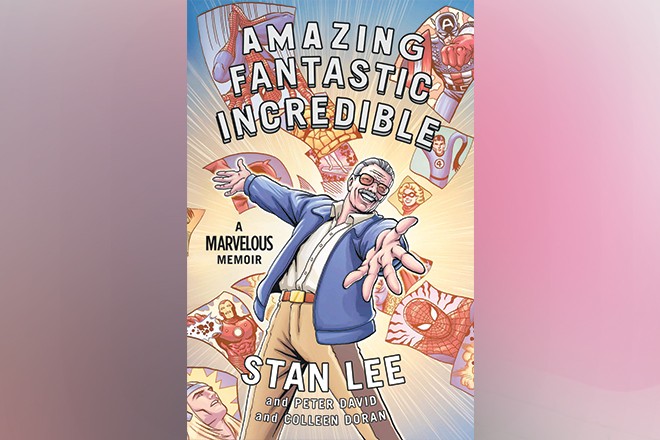 Comic book icon Stan Lee’s Amazing Fantastic Incredible: A Marvelous Memoir is everything you want to know about defected superheroes, Marvel Comics and the man behind its rise, Stan Lee. He may not be around anymore but Stan Lee’s work lives on, in his own way. And his memoir - co-authored with Peter David and Colleen Doran - tells his story in his own offbeat comic book style. So here goes … a magnificent memoir of the man behind the Marvel Cinematic Universe!

You may have heard of text-based memoirs but with Stan Lee, it had to be an all-color graphic adventure, because that’s the kind of narrative he championed all his life. In Amazing Fantastic Incredible, he describes his amazing life, his fantastic career and his incredible success at the latter part of his life, which you may end up envying. For someone who started his career during the Second World War, helped influence countless youngsters through his writing in the 60s, 70s and the 80s, and stayed relevant for seven decades, this book does a great job. Not only does it take you back in time, it tells you Stan Lee’s story in his own words.

If you didn’t know that Stan Lee’s real name was Stanley Martin Lieber, that his first meeting with his future wife was exactly the way Peter Parker met his true love and that he had to fail a lot before achieving success, then this book is what you need to refer to. In classic movie style, he starts from the beginning, addressing his fans from a stage and telling them about his never-rich parents, his ever-rich make-belief world, his first job and later his dream job, all in a comic book style. There were mishaps on my way but the way Stan Lee describes them makes them appear as significant learning experiences. There was the creation of the Comics Code Authority that he was the first one to bypass, his own publisher’s decision to veto some of his ideas that became bigger than ever as he didn’t listen, and above all, some of his collaborators including Jack Kirby and Steve Ditko leaving Marvel Comics at their peak.

And then there was the creation of superheroes, especially the ones we loved in Avengers. There is a story behind the creation of each and every Avenger, including Spider-Man (he will always be an Avenger!), Captain America, Iron Man, Ant-Man, Thor, Hulk, Dr. Strange and others. However, they weren’t the first Stan Lee creations to make it big, the honor stays with Fantastic Four, a comic book series he created in response to rival DC Comics’ Justice League. Interesting, isn’t it? Considering Marvel is doing so much better at the box office than its rivals, one must applaud Stan Lee’s vision, persistence and farsightedness.

The latter half of the book is also interesting because it tells readers about Stan Lee’s career after he resigned from Marvel Comics and became their face. His meeting with Paul McCartney, how he came up with the name for The Punisher and how surprised he was to find out that his own daughter had written a novel; incidents like these will give you insight into his personal life. In this richly illustrated book, he describes everything he was a part of - both successfully and unsuccessfully - from his heart and ends up in the readers’ heart like his comic books.

For someone in his 70s some twenty years ago, he was too active for his own age. Not only he changed the way Hollywood made films, but he also ended up making cameo appearances in all of them. He describes the feeling of being asked to write his own version of DC Superheroes, on having his name on Hollywood Walk of Fame and being oblivious of his own popularity as something he least expected. Like all his comic books, this all-color graphic memoir has everything from the good, the bad and the ugly revolving around Stan Lee’s unparalleled career. Excelsior!