More than a metropolis

What are the challenges and trends of urban Lahore today? The answer to this again lies in a question of paradigm: what issues do we see as vital, and which ones do we choose to blindfold ourselves to? 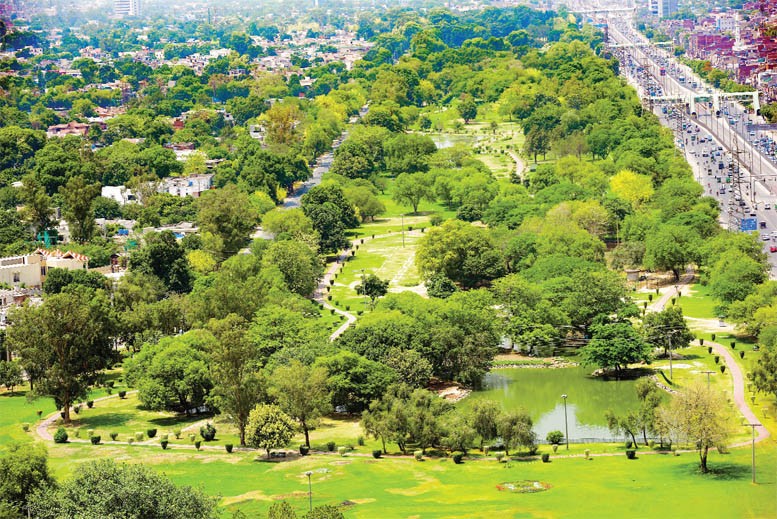 Some weeks ago, the LDA launched an online survey via its website, calling for public opinion on the prospect of ‘Building and zoning regulations promoting vertical development.’ Following this, a ‘public hearing’ was undertaken. These are encouraging steps by the LDA. However, grave questions stand to be asked regarding the LDA’s plans, and whether these are based on a broader vision for the well-being of the city dwellers.

In one of his most influential works, urban sociologist Robert Park wrote in 1967, "the city… is man’s most consistent attempt to remake the world he lives in, after his heart’s desire… Thus without any clear sense of the nature of his task… in making the city, man has remade himself." To this, in his work The Right to the City theorist David Harvey adds: "the question of ‘what kind of cities do we want to live in’ cannot be divorced from the question of ‘what kind of people do we want to be,’ and ‘what kind of humanity do we wish to create amongst ourselves’."

A city’s building codes, by-laws and zoning regulations are not merely engineering issues. The process of city-making is an outpouring of the city ‘after our heart’s desire.’ As such, all policies, codes, and by-laws must be a resultant of a process of re-thinking about the kind of social relations we desire, the question of securing livelihoods, whether the rights of the vulnerable matter to us, the kind of collective experience we want in public space, and the degree of environmental responsibility we seek.

The Brazil City Statute is a relevant example. Premised on the idea of the ‘Right to the City,’ this legal document builds on the Federal Constitution of the country to provide citizens with legal access to land and housing. Pakistan currently neither has an urbanisation policy nor a city statute. Successful precedents abound. But the act of learning from these rests in the wisdom to replicate the most appropriate best-cases; the chaos-to-harmony struggle of Medellin as opposed to the glitz and glamour of Shanghai, the home-grown development of Curitiba as opposed to the first-world image-making after Dubai.

In the early 1990s, Colombia’s city Medellin was notorious for drug-crime, violence, and civil-war like conditions. 1995 onwards, through engagement with civic initiatives, the government initiated a process of change. The Medellin Charter envisions urban development as ‘cities for life,’ and defines these as urban constructs that "build, enrich, and gratify the lives of all citizens". By this vision, the Medellin municipality developed a number of strategies. Upon these were based a number of programmes such as ‘Neighbourhood Improvement Programs’ and ‘Integral Urban Projects.’ Interventions based on these included, for example, abandoned water reservoirs turned into public parks, improvements in public transport, an upgrading of social and urban peripheries with new libraries and kindergartens, and other public facilities.

As many as 33 petitions have been filed in the Lahore High Court (LHC), since April 2019, against the Punjab Local Government Act 2019, 32 of which are by private individuals, and one by the Local Councils Association of Punjab (LCAP). These petitions challenge the legitimacy of the new law, certain articles in it for being in conflict with the Constitution of Pakistan, the procedure of de-limitation, and the act of abolishing the previous LG system before its term ended.

By this inference, what are the challenges and trends of urban Lahore today? The answer to this again lies in a question of paradigm: what issues do we see as vital, and which ones do we choose to blindfold ourselves to?

According to the last census, Lahore faces an annual population growth of 3.32 percent. Further, the city cannot be considered a metropolis alone; it is a functioning metropolitan region, borrowing from and responding to the needs and resources of smaller cities in its immediate neighbourhood.

An urban policy initiative lacks sincerity if it does not prioritise the issues of the urban poor. As Pakistan’s projects and plans prove, however, this most vulnerable and deserving majority is considered at best an eye-sore for the city. According to the Punjab Cities Atlas (2015), the wealthiest 20 percent of Lahore’s population lives on 58 percent of the city’s land, while the poorest 29 percent live on 6 percent of the city’s land. It is here that a skewed pattern of densification vs sprawl exists; Lahore has a density disparity. While the city’s wealthy spread out into low density luxury housing developments, the poor and middle-income become more and more confined to an ever-densifying housing footprint within the city.

Lahore needs a comprehensive study of the housing trends and conditions of the poor and lower-middle-income groups; this has not been undertaken in several decades. Due to rising costs of living, the densification of existing homes is leading to over-crowding and deterioration in living conditions for lower and lower-middle-income families. To add to this, these very poor communities are shunned from some of Lahore’s parks and green spaces by virtue of being ‘non-members’.

Disparity is an evil in and of itself because it creates in the victimised citizen the urge to despise and antagonize the apparent perpetrator. Research on cities across the world has shown that a lack of social justice that becomes the root cause of rising trends in violent crime.

By-laws and regulations develop in response to a number of concerns: these may be health- and safety-based, ecology- and conservation-based, form-based, density-based, use-based, and so on. The LDA’s draft of ‘Amended Building and Zoning Regulations’ (July 2019) takes a bold step towards promoting the vertical growth of Lahore.

This is being allowed for both residential and commercial development. The horizontal expansion of Lahore is a trend that has been in motion for more than a decade. Yes, allowing for vertical development may address this but only as a drop in the ocean. One, because vertical development must create a replacement of and not an addition to land uses that are currently seeking to expand horizontally. Two, this must be a regulated practice, and not be left blindly to the market, which in effect leaves the occupation of vertical space to open speculation. And three, most importantly, strict regulation in the form of urban growth boundaries must put a check on the multi-headed monster: unlimited urban sprawl in the form of private upper-income housing by powerful land developers such as the DHA and Bahria. A treatment of symptoms alone, without addressing the causes, is futile.

And then there is the orphan of Pakistan’s city planning: the pedestrian. According to estimates, approximately 8 percent of Lahore’s population commutes by private vehicle. Ironically, in a city whose population is largely pedestrian, the bulk of Lahore’s infrastructure budget in the past decade has gone into the construction of vehicle-friendly infrastructure: underpasses, flyovers, and signal-free corridors. If Lahore is to secure a future that provides dignity in the citizen’s urban experience, a public transit masterplan for integrated public transport, and the creation of a pedestrian-friendly city are paramount.

This involves not only the construction of walkable footpaths and safe pedestrian crossings but also the comeback of signal-regulated traffic movement and a reversal of the abomination to pedestrian movement that is the ‘signal-free corridor’. Europe’s pedestrian-friendly cities are excellent models, while examples resonating more closely with home include Morocco’s Fez, known to have among the best pedestrian infrastructures of the developing world.

Lahore’s deteriorating natural environment involves not only the now annual smog season but also a yearly drawdown of its water table as a result of unchecked water consumption and waste, largely by unregulated industries and private housing developments. A city’s regulations must involve the equitable and environmentally-responsible distribution and use of natural resources such as water, energy, and wastewater. Water conservation and the rehabilitation of natural water sources can only succeed if it happens at the tier of the home, the neighbourhood, the district, the city, and the region simultaneously. This includes strict government monitoring of the excessive extraction of ground water, and penalties for the pollution of the existing water source.

Guidelines and by-laws provided for many of Australia’s cities emphasise the concept of ‘reclaimed’ water as "water derived from wastewater and treated to a standard which is satisfactory for its intended reuse application." To induce rainwater sequestration into the water table, Germany’s cities lay out strict standards for maximum allowable hard-landscaping, encouraging the use of soft or ‘katcha’ surfaces. These act as both carbon sinks and water sheds for driving water back into the city aquifer.

Further, cities across the world have been able to reclaim and rehabilitate almost-depleted natural water bodies. One of the most celebrated examples is Seoul’s Cheonggyecheon River Restoration that brought back a deteriorating river channel that had been confined to an underground concrete-covered trunk channel, under a running freeway. Not only was this river reclaimed by removing the highway, the area is today one of the city’s most vibrant urban spaces.

The city is embedded in nature, however depleted by human activity. Research today is also attesting the role of nature in reducing anxiety and depression in individuals residing in urban environments. The LDA’s initiative to create urban forests is commendable. However, tree plantation can only be effective if parcelled within protected eco-zones for the conservation and regeneration of Lahore’s indigenous flora and fauna.

Worldwide, building by-laws are playing a primary role in reducing energy needs by, for example, putting a cap on allowable glazed area in buildings, especially high-rises. The Arfa Tower is a case in point. Built as a ‘fashion icon,’ the form of this glass tower may remind us of the glamour of Dubai, but the air conditioning load this incurs in order to counter the building’s massive heat intakes, is no less than criminal.

An often underestimated resultant of the by-laws and zoning regulations is the physical form the city consequently takes. Urban form involves not merely the making of a skin-deep image of beauty and order. In its truest sense, it is where the aesthetics of built environment meet the aesthetics of social relationships. It is here that the importance of the scale and typology of our built environment comes in: how can our by-laws and zoning regulations give birth to qualities of space such as ‘intimacy,’ ‘centredness,’ and ‘smallness’ that enable the nurturing of relationships of trust and belonging between citizens, and secure elements of biophilia in the human habitat.

In the intensifying trend of urbanisation across Pakistan, urban ‘well-being’ must be identified as a citizenship right. This encompasses clean air and water, security of housing tenure, the right to a dignified commute, and open access to urban green spaces among others.

While the case of Bhutan may be too radical for the prevailing development mindset, it is one that deserves reflection. Bhutan’s legal code, developed in 1729, states: "If the government cannot create happiness for its people, there is no purpose for the government to exist." Today, the country uses the Gross National Happiness (GNH) index, which contains measures of good governance, the preservation of culture, conservation of environment, and socio-economic development. Ironically, Bhutan also has one of the world’s fastest growing GDPs.

The human habitation is not merely a template for the fulfilment of functions and tasks. It is the mirror in which man endows meaning and purpose to himself and the world around him. Once this is understood, the urban planner becomes a reformer of some of society’s ills, an editor of people’s everyday stories, and the author of our collective ethos.

The writer is an urban development researcher. She can be reached at raezdi@gmail.com

More than a metropolis