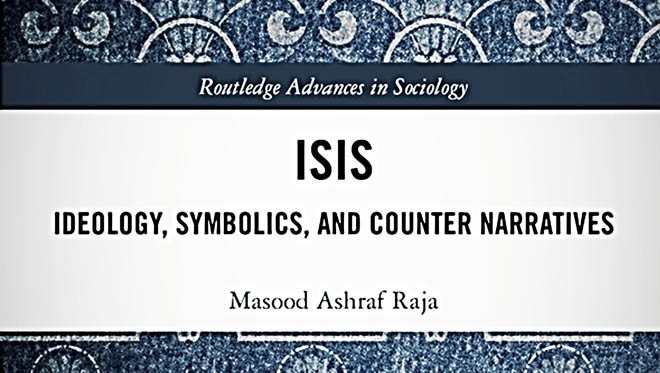 Masood Ashraf Raja is a retired military officer and a literary studies specialist serving as an associate professor at the University of North Texas. He brings to the topic a uniquely hybrid and holistic perspective which reminded this reviewer of Michel Foucault’s statement about his studies of madness. "I am mad enough to study reason and rational enough to study madness," Foucault used to remark about his unique position. Raja claims his position similarly: "I…bring to the subject a deep understanding of military operations--both tactical and strategic - and the skills and techniques of acute readings of literary and other texts" (p. 3).

The literary side of the writer shows in a very subtle reading of the way the ISIS imagines itself and how a seriously intolerant and militant organisation reacts to humour. The ISIS, we are told, does not like the Arabic moniker DAESH which is an acronym made out of Dawla Al-Islamiya fi al-Iraq wa al-Sham because it is similar to the Arabic word daes which means "something that crushes or tramples" (p. 9). This humorous treatment of the ISIS leads to the conclusion that daesh is vulnerable to satire. However, this observation does not produce a theoretically satisfying exposition despite its enormous potential. The work of Mikhael Bakhtin and Michel de Certeau on popular humour and subversive readings of serious things could have been invoked here to realise the potential of such insightful observations.

The writer presents the analysis of what he calls ‘the ideology of the ISIS’ without yielding to the temptation of essentialism, which is the h

allmark of many Orientalist (and non-Orientalist) books on the Islamic world: "the world of Islam comprises more than a billion people who live in over forty nation-states, and I am in no way attempting to conflate their particular experience under the general rubric of a unified Muslim identity" (pp. 44-45). Despite this disclaimer, there are certain things to be said about the ISIS ideology: that it is built upon a certain way of imagining the self-image of the Muslim male; that the world of madrasahs is predominantly male; that this overwhelming maleness of the Deobandi and Wahabi worldview produces certain ground realities. This is where Raja excels in enlightening the reader with new information and perspectives. We learn that 64 percent of madrasahs in Pakistan are "run by Deobandi scholars" and "even if these organisations do not teach hate or militancy, the curriculum itself will force the students to adopt the reigning ideology of the madrassa as the only truth" (p. 119).
It seems that freedom of thought and action is under attack all over the world. In this context, Raja has written a book that forces Muslim readers to confront those who claim a monopoly on Islam and to carefully understand the ideological framing of the male Muslim self in a specific discourse.

Muslim populations are also hostage to the ISIS and other extremist organisations that are created in the name of Islam. The West has a role in their creation. Wikileaks, Time, Haaretz (an Israeli newspaper accessible online), Iran’s government and the United Nations have all pointed to the relationship between the ISIS, Syrian rebels and Israel. A statement by Abdullah Ghanji, an editor of the Iranian newspaper Jawan, published in Time gives the Iranian view thus: "We believe that the West has been influential in the creation of ISIS for a number of reasons. First to engage Muslims against each other, to waste their energy and in this way, Israel’s security would be guaranteed or at least enhanced" and "Secondly, an ugly, violent and homicidal face of Islam is presented to the world. And third, to create an inconvenience for Iran" [Inside ISIS: A Time special report.]⧪ Even Haaretz has written on the UN report that exposes the link between extremist elements in the Muslim world and Israel’s Defence Forces. Criticism of Israel’s support for organisations that disrupt the Muslim world does not equal to anti-Semitism, which is a Hitlerian/fascist position. The writer of this book could have chosen to discuss these views of the ISIS. But in Trump’s America, South Asian scholars of postcolonial cultural studies are in a tough situation. After moving to the USA in search of a liberal humanist utopia where free speech is protected by the First Amendment, they are facing the rise of neo-tribal politics because globalisation has produced so many outsiders even in the West. They have also witnessed how Edward Said was hounded by the Zionist lobby in the USA and was labelled as "professor of terror" for criticising Israel and supporting Palestine. The situation became so problematic that Jewish students were asking for Edward Said’s dismissal from Columbia. The provost of Columbia University had to intervene and point out that Edward Said was a tenured academic and "a giant in his field of scholarship" who "has created an entire field of work" on which other universities offer courses.⧪⧪ This kind of hostility to critical work in the West is as troubling as the intolerance of the ISIS and al-Qaeda in the East.

It seems that freedom of thought and action is under attack all over the world. In this context, Masood Ashraf Raja has written a book that forces Muslim readers to confront those who claim a monopoly on Islam and to carefully understand the ideological framing of the male Muslim self in a specific discourse. The book ends with an emphasis on a hope to mobilize love, which, in the view of the author, is the ultimate driving force of Islam. That is a commendable position to have towards Islam, especially by a former warrior.