Can the Lib Dems’ Remain stance win them an election? 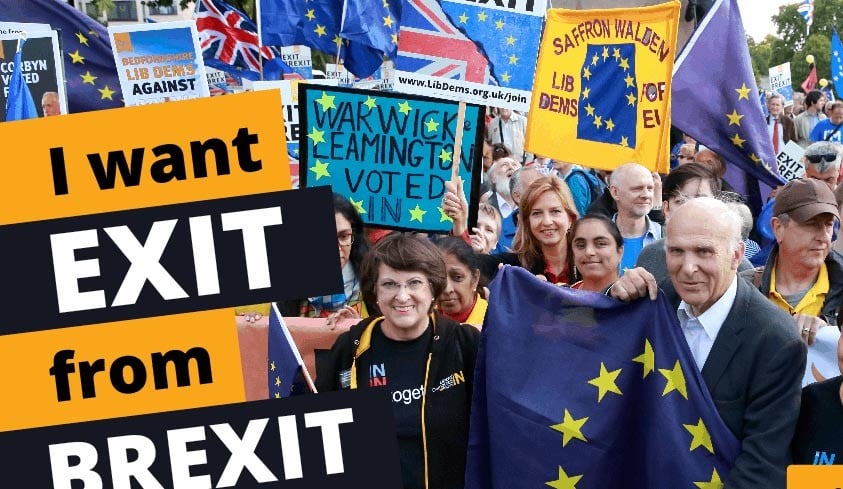 It’s party conferences time in Britain and the Liberal Democrats held theirs early last week, all guns blazing for an election battle. Led by their new leader, Jo Swinson, their strategy is to be unequivocal and go hardline on a Remain pledge. Effectively they are saying: "no ifs or buts or second referendum, if we come to power we will NOT take Britain out of the EU. Indeed Swinson said the party would revoke Article 50 on their first day in power.

The Lib Dems have come forward with their usual Gung Ho, we are the middle-of-the-road and voice of reason party rhetoric. This is not unusual in itself. What is unusual is their repeated refusal, this time around to, if needed,  form a coalition with either one of the major parties. Swinson has scathingly put down the leaders of both the Conservative and the Labour parties over and over again and now insists on conveying the impression that the Lib Dems are about to sweep the polls and that is why they needn’t bother with coalition partners.

Of course, some rather strange things have happened in British politics in the past few years but somehow even in this peculiar age of bizarre and unexpected happenings, a Lib Dem election victory seems a far stretch of the imagination. The party gained the most parliamentary seats (62) in the 2005 election when they were led by Charles Kennedy but were really at their political peak after gaining 57 seats in 2010 under Nick Clegg. The 2010 election returned a hung parliament: the Conservatives had 306 seats, Labour 258 and the Lib Dems 57. This meant that the Lib Dems could also have formed a coalition with Labour’s Gordon Brown (along with a handful of other allies). Instead, they chose to go into coalition with David Cameron’s Tories.

What followed was the Cameron-Clegg coalition years. Nick Clegg was made ‘deputy PM’ and  a few Lib Dems were given cabinet posts after which the Conservatives proceeded to unleash a vicious programme of social security and public spending cuts that impacted the least well-off and most vulnerable members of society. They also proceeded to triple university fees even though  the Lib Dems had pledged before the election they would not raise university fees. Clegg and all other Lib Dem candidates had signed an NUS pledge to vote against any increase in fees but they broke that promise. They later explained that ‘they had no choice’. As critics pointed out they did have the choice to resign from the coalition and let it collapse but instead they chose to remain and thus enable Conservative policy. No wonder, then, that so many people lost regard for the party and felt betrayed – in the 2015 election their seats tally plummeted from 57 to just 8. They picked up a few more seats in the election following the referendum and now they have picked up a few more because several defectors from the two other parties have joined their ranks.

But can the strange and rapidly changing political climate of today make a Lib Dem win a possibility? It seems unlikely because there is still a large part of the electorate who will find it difficult to trust the party after their collaborating with the Tories in implementing austerity programmes and policies that degraded the fabric of British society so badly.

It is a clever strategy for the Lib Dems to present themselves as the only electoral choice for Remainers, but it is also a risky one. And they are taking a divisive stance -- a no negotiation approach that will deepen the fissures in a country where opinion is already polarised.

In this respect, Labour possibly has the most conciliatory approach, yet it is the one that is most often criticised for lack of clarity. However, perhaps they have the right idea and it is better in politics to keep  options open and not alienate many of your core supporters, a view that the Green Party also seems to be coming round to. It will be interesting to see if Swinson’s gamble pays off when an election happens. I am pro-Remain yet I would never vote for the Liberal Democrats … they could, after all, have formed a coalition with Gordon Brown  – and then they wouldn’t have had to break their promises and go back on their pledges….