Peter Travers
In the picture
September 15, 2019 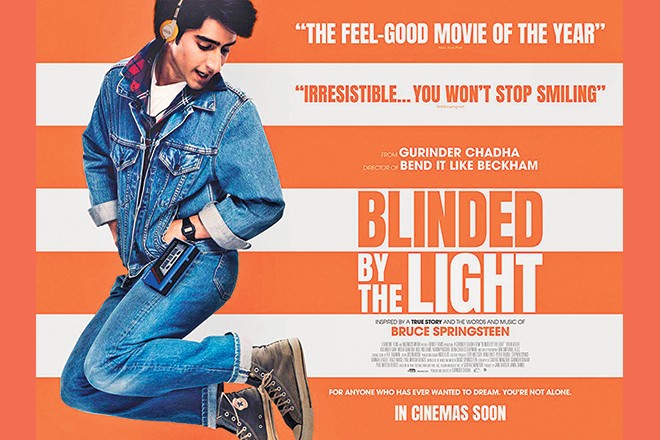 Blinded by the Light****

For some people, Bruce Springsteen doesn’t just write lyrics -- he sings words to live by. That’s the case for Javed (dynamite newcomer Viveik Kalra), a no-hope British-Pakistani teen feeling the financial squeeze of Thatcherism in 1987 Luton. Then he hears Springsteen for the first time, and the words of ‘Dancing in the Dark’ jump out of his headphones and into his life. He’s exhilarated. Look for this exuberant gift of a movie to hit you the same way.

Directed by Gurinder Chadha (Bend It Like Beckham) from a memoir by the Javed-like Springsteen fan Sarfraz Manzoor, Blinded by the Light is a joyous antidote to cynicism. Cynics, of course, will hate it. At first, Manzoor himself was a Springsteen skeptic, thinking of the Boss as "the guy who makes millions out of pretending to be working class." But the pull of the music was irresistible for a boy battered by loneliness and alienation.

Chadha, who wrote the script with her husband Paul Mayeda-Burges and Manzoor himself, is adept at laying the groundwork for why this kid from the mean streets of Luton -- he called his memoir Greetings From Bury Park -- was a natural fit with the bandana-wearing artist who dubbed his first album Greetings from Asbury Park, N.J. Chadha doesn’t gloss over the darkness at the edge of town in the form of skinhead bullying and the anti-immigrant nationalism that raged then as it does now with the rise of hate-mongering. It’s brutal intolerance and the need to transcend it that made Javed and Bruce kindred spirits.

And so we watch Javed, scribbling notes and attempts at poetry in his journal, speak Springsteen like his personal gospel, making him feel born to run against the strict rules of his wage-slave father Malik (a first-rate Kulvinder Ghir), devastated after being laid off by the local GM plant where he’s worked for 16 years. Malik’s son, refusing to go gentle into that bleak night, lives by the resistance of ‘Thunder Road’-- "It’s a town full of losers/I’m pulling out of here to win."

By necessity, Javed develops his own support system. At school, he discovers a teacher, Ms. Clay (Hayley Atwell), who inspires without condescending to him. In Eliza (Nell Williams), he finds a girl to set his pulse racing and share his dreams. In Roops (a livewire Aaron Phagura), he finds a friend who knows just what Javed is missing. It’s Roops who gives Javed that cassette of Born in the USA and lets the music work its magic. Javed, Roops, and Eliza literally dance in the streets with Springsteen lyrics popping up on screen to create a rock fantasia that also stands as a slashing rebuke to racism. Sure it’s cornball, but Chadha revels in it. You will, too, as the movie becomes an irresistible blast of pure feeling. Is the music of Springsteen, who gave the film 17 songs and his blessing, really "a direct line to all that’s true in this s****y world"? Go ahead and argue. But from Thatcher’s England to Trump’s America, it sure as hell couldn’t hurt.