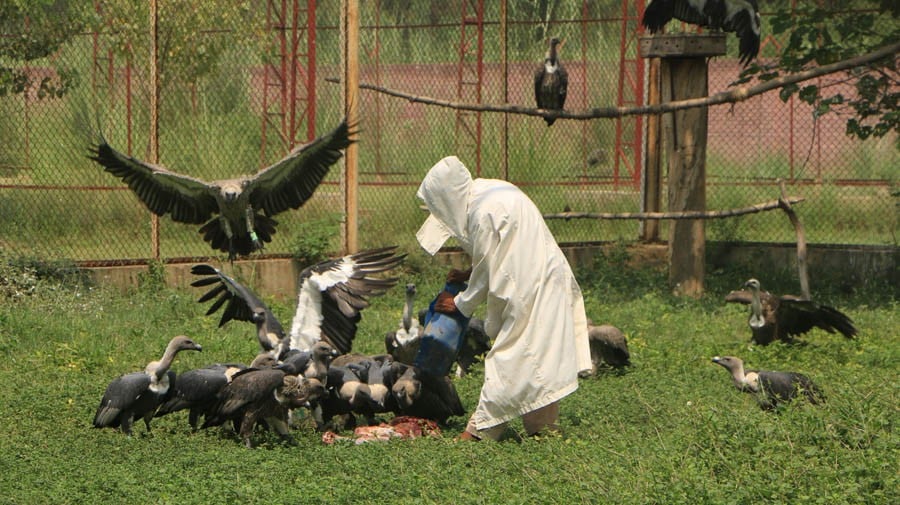 About 85 kilometres from Lahore, in the Changa Manga forest, rests an aviary built by World Wide Fund for Nature -Pakistan (WWF-Pakistan) for the oriental white-backed vultures also known as gyps bengalensis. This species is almost extinct in Pakistan today. The aviary is a large enclosure, big enough for the birds to fly, mate, take care of their fledglings, have food and live safely on the trees.

International Vulture Awareness Day is held every year on the first Saturday of September to create awareness about the threat of their extinction of vultures worldwide. The WWF-Pakistan took a group of journalists to visit the aviary on Sept 4 as part of the day’s activities.

Not very long ago oriental white-backed vultures were a common sight in plains as well as hilly regions in Pakistan, India, Bangladesh, Nepal, Bhutan, Myanmar, Thailand, Laos, Cambodia and Southern Vietnam. However, since the ‘90s nearly 95 percent of vultures have died due to the use of industrial chemicals/drugs in the region. The region’s ecosystem has been affected by the lack of scavenging.

Vultures are scavengers with an extremely corrosive stomach acid that allows them to consume and digest rotting carcasses; even carcasses infected with anthrax, botulinum toxins and rabies which would kill other animals. Most vultures do not have feathers on their head and neck which enables them to dip their heads into dead animals’ body when feeding without getting dirty plumage.

Another specie of the vulture family endangered in Pakistan is the long-billed vulture (gyps indicus). It is found in Nagar Parkar in Sindh only. Use of diclofenac sodium, a non-steroidal anti-inflammatory drug (NSAID) and drugs like ketoprofen and aceclofenac used by veterinarians in livestock, is causing kidney failure and mortality in vultures. In 2006, diclofenac was banned for veterinarian’s use after WWF lobbied with authorities, veterinarians and pharmaceutical companies for its replacement with meloxicam, which is safer for the birds.

To mitigate the impact of the mass extinction of these birds an aviary was established in Changa Manga, the oldest and largest man-made forest in the world. In 2005, the Gyps Vulture Conservation Centre aviary started its ex situ Programme. The conservation of the breed in captivity started with 14 oriental white-backed vultures. Today, the facility is home to 15 adult and 7 juvenile birds.

These birds only lay one egg per year resulting in a slow population growth. There are 7 pairs at the moment but only 4 of them are laying eggs. Vultures are loyal birds and stay with the same partner for life. If the mate dies they usually don’t pair again. Both parents take part in the incubation and grooming of their chicks. Vulture eggs are very sensitive and need great care for their survival. The handlers are therefore very careful in dealing with them during the breeding season which starts from August and lasts till April. No visitors are allowed at the aviary during the period because the birds get agitated with strangers around.

The adult birds are ‘served’ donkey and goat meat. Rabbits are given to the young birds. This term may sound odd to many but the way their food is taken care of and how Abdul Ghaffar, the food handler and Vulture Conservation Centre incharge, gives them meals is quite impressive. Donkeys, rabbits and goats are kept on the venue, monitored for 7 days and once they are cleared of any harmful drugs in their body, they are fed to these birds. About 20 kgs of meat is fed to them daily.

It is interesting to see Abdul Ghaffar enter the huge cage wearing a white gown with a white head cover. A number of vultures calmly gather around him waiting for him to place the meat near them and inch towards the exit after the needful. This is standard attire recognized by the vultures. In case the handler is not there someone else can wear it and give them food.

Abdul Ghaffar, a commerce graduate from the University of the Punjab, is a Changa Manga native. He has been working with WWF Pakistan since 2014. If vultures are disturbed during feeding time they may stop eating for days.

Speaking to TNS, Ghaffar said, "These birds are not as dangerous as some people think. My observation is they have a very sensitive nature. They are faithful to their partners and guard their children dearly. They have a very important role in nature. It is sad that humans have been a cause of their death."

Muhammad Jamshed Iqbal Chaudhry, the conservation officer from Islamabad, also spoke to TNS about the aviary. "In 1999 when the project started in Changa Manga there were more than 1,000 pairs of vultures in Changa Manga. In 5 years the whole population died due to use of diclofenac drug."

There have been many cases in India and Kenya where a flock of 50-100 birds sat on a carcass and died shortly after ingesting the meat as the dead animal had been injected with a drug. The loss to the ecosystem of the area is huge.

Chaudhry said, "The situation is so bad in Pakistan that there are less than 100 birds in AJK and Nagar Parker, Sindh. As few as two carcasses are enough to cause the extinction of these species. Over the last one decade almost 99 percent of the population has died. This has been the steepest decline in history."

Talking about improvement in vultures’ count in Pakistan, Jamshed says, "In 2000, there were 400 breeding pairs in Nagar Parker. Only 35 survived the lethal drugs. In 2006, we made efforts to have the drug banned. Since then we have seen a steady increase in numbers. There are 180 vultures now."

"Long-billed vultures make nests on the ledges of hills in Karoonjhar mountains. During the breeding season local people move to these areas for months to cut trees and gather herbs for medical purposes, due to which vultures are disturbed and many eggs do not survive. The WWF is running an in situ conservation effort with the help of federal and provincial governments which integrates research and monitoring, advocacy, capacity-building and training, community empowerment and awareness to ensure a viable population of vultures in the wild. By 2022, we aim at establishing vulture safe zones and complete eradication of diclofenac sodium and other harmful drugs," says Jamshed.

The extinction of vultures is a loss for people and the environment. Vultures prevent diseases from spreading to humans and animals by consuming the dead animals’ meat. When the vultures’ count started decreasing in India, the number of dogs increased and so did rabies. The Indian government had to make a huge investment to correct the situation. But poachers do not like vultures. Some of them try to poison them as vultures indirectly help authorities track poachers.

Vultures have also been an integral part of religious practice. Tibetan Buddhists and Zoroastrians do not like to bury their dead but place the bodies under the sky in Towers of Silence; as according to them this is one final good deed the deceased is able to offer to another living creature before departing from earth.