A look at poet, literary translator and anthologist Sarita Jenamani’s life and works 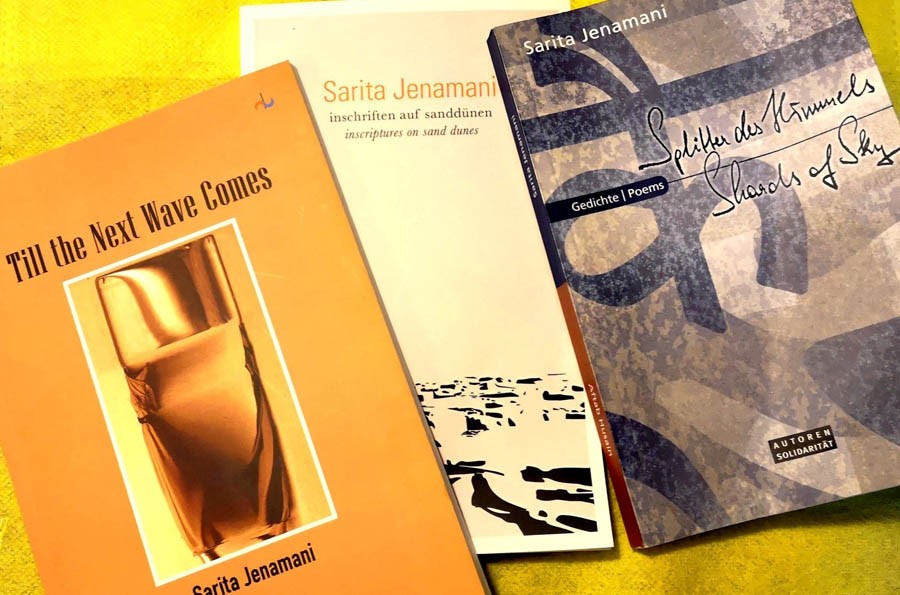 beneath a dawning sky

in a mixture of azure and gold

There is still a lot to say

She writes from the perspective of someone who looks at life, culture and her self, from afar. Speaking in undertones, she narrates an itinerary that despite being fascinating, resists being grasped by the jejune and the naïve – nurtured on ‘commonsense’ notions of poetic truth.

Sarita Jenamani is a poet of Indian origin based in Austria, a literary translator, anthologist, editor of a bilingual magazine for migrant literature - Words & Worlds - a human rights activist, a feminist and general secretary of PEN International’s Austrian chapter. Perhaps the most conspicuous aspect of her personality is her poetry that has so far been published in three collections. English is the chief medium of her creative process. The other two languages she writes in are; Odia, the state language of the place of her origin Odisha (India); and German, the language of her country of residence, Austria. She uses these languages for the translation projects that she undertakes from time to time.

Jenamani’s poems have an alluringly deceptive façade. Her poetry is not what it appears at first sight. It resists facile categorisation. Remembering Eliot, you can say that it conveys before it communicates. She writes it, then erases it it in a way that it is still intelligible but only if you have a discerningly sharp vision. Yes, only then can you make out, at least your own layer of the meaning of her poetry.

One reason for this might be that  Jenamani offers a number of identities - fugitive, fluid, slippery - that appear to interact, compete, overlap and, at times, subvert and undermine one another. To illustrate these hurdles one may point out to one of her tactics: there are moments when the poet is keenly conscious of her female self. This awareness runs deep in her poems. You find a few poems where the poet-protagonist speaks from the apparent female subject position. While retaining a subtle realisation of her female subjectivity, the poet, in most cases, manages to transcend gendered boundaries. This state which is similar to the Freudian fort-and-da accompanies us throughout her poetry. This is a predicament not of the poet; but of a dull reader, or a dopey critic.

‘I tap on the door

but before I enter

the door enters me

and keeps on opening countless doors

Jenamani’s poetic process is neither linear nor circular. It seems to take the shapes of fissures, ruptures and disjuncture. She starts a poem and then seems to forget her point of entry and in doing so she moves on, away. This madness has a method: an ‘incoherent coherence’ if you like.

Extraterritorial existence that entails a sheer sense of non-place-ness - not much far from the one proposed by French ethnologist Marc Augé - finds a haunting presence here. Quite atypically for a migrant poet, Jenamani shuns the cliché-ridden trope of nostalgia, memory, uprootedness and estrangement etc. Neither does one find here a celebratory tone nor even the euphoric mood of a postmodernist holder of the so-called third space. Only a profound feeling of disjuncture - within and without - that borders, at times, on numbness. Or, an air of existential geworfenheit (being thrown) that pervades her poetic being. By sublimating private anguish, Jenamani’s poetry offers an eternal and expansive here-and-now that the poet calls, à la Bakhtin, a Chronotope - the where and when for the collision of human conditions.

In her poem, Mapping a World of Her Own’, she writes:

‘She bathes in sunshine,

decorates her hair with stars,

and she lights her courtyard

The walls of her house

stretch from one end of the sky

Yet sometimes she wishes

to leap over these walls’

Jenamani’s poetry is not what it appears at first sight. It resists facile categorisation. Remembering Eliot, you can say that it conveys before it communicates. She writes it, then erases it in a way that it is still intelligible but only if you have a sharp discerning vision.

Common emotions and objects of everyday life surface here, for example, doors, windows, descriptions, even names of certain places; but the poet mainly tends towards elevating her enunciations to an abstract, philosophical plane. Indian critic K Satchidanandan sees in Jenamani’s poems the "organic links between poetry and philosophy" as he points to her "subtle and suggestive meditations on time, mind and the ephemeral nature of human existence on this little planet." This is, however, not to suggest that hers is poetry of mere ideas. One does find in her an effusion of cutting sharp and severe emotions and moods, as is demonstrated in one of the powerful images in her poem An Equestrian Mindscape:

‘Rain washes away my voice

from the streets and lanes

and from the yard of your house

tramples you and me

under its hind legs

the command of its

In a time when most of our poetic idioms are susceptible to degeneration by facile journalese, this poetry stubbornly clings to the dense elusiveness of its primordial quintessence. But, when given access, it disquiets and unsettles you; yet, at the same time, it also composes and soothes you.

‘What is the distance

between the desire and

the language that tries

The limitation of decoding

with the smog of language

the flight of a falcon

in a state of epilepsy

Why don’t you map this span

of your dream reflected

in a distant galaxy’

Unlike most of her contemporaries, especially those writing in exile, Jenamani does not approach life and the human condition through some pre-conceived notions or readily-available formulae. Resultantly, she comes up with stuff that is at once dense and profound. Her treatment of it is subtle and sharp. In a way, Jenamani could be seen in the tradition of her illustrious precursors; the South Asian diaspora poets like Meena Alexander, Imtiaz Dharker and Sujata Bhatt. Her system does not remain anchored to her Indian-ness. Though one can discern a tiny tinge of her original culture in her texture, she offers a panorama that is paradoxically punctuated with an unsettling aporia of being here, there and nowhere - a phenomenon that signifies our zeitgeist (spirit of the times).