Hindu temples in Multan are vulnerable. Bureaucratic machinery, lacking equitable minority representation, fails time and again to do the needful to preserve heritage and cultural diversity 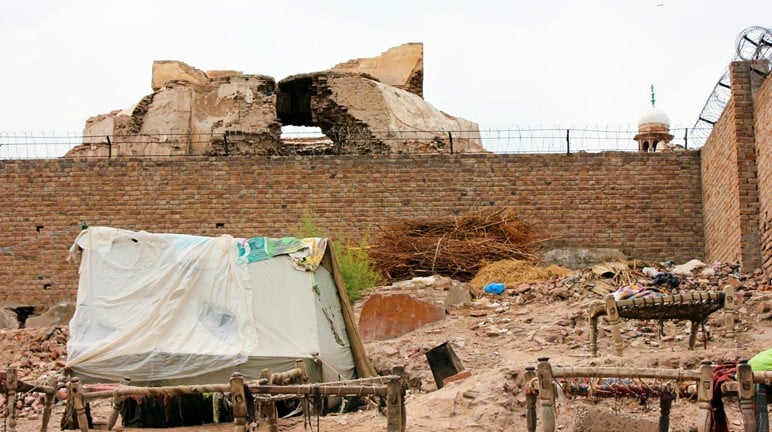 The city has been, inhabited for thousands of years, but its heritage and archeological sites are endangered. Areas such as the Walled City, Qila Qasim Bagh and Ghanta Ghar are encroached upon by illegal occupants in violation of the Antiquities Act. Out of the six gates that provided a passage into the Walled City, three have disappeared with the passage of time.

Many ancient temples, an important component of Multan’s history, are in ruins. Many of these were demolished in a reaction to the demolition of mosques in India. Despite revival and restoration plans being prepared by successive governments, down to the allocation of budgets, there have been no positive developments to speak of.

A caretaker of a temple, laments that Foreign Minister Makhdoom Shah Mehmood Qureshi must pay as much attention to the temples in ruins in his hometown as he is paying to the Kartarpur Corridor project. The caretaker says non-technical, clerical staffers without specialisation in archeology conservation are handling the oldest archeological sites at Evacuee Trust Property Board (ETPB). Hindu minority representatives complain that the ETPB, which has been administering these temples and Hindu properties, has not appointed a single non-Muslim as chairman since its establishment.

"The conservation of heritage, temples, shrines and ancient buildings is paramount for identifying, recording and analysing cultural resources. It provides a sense of identity and continuity for future generations in a fast-changing world", says Zahoor Dhareja, a Seraiki nationalist.

"Preserving the history of a place through its significant historic resources gives a community its unique character. This provides the people with a link to the roots of their community. Overall, this adds to the quality of life, making for a more livable community", says Shakuntla Devi who is heading an NGO in Multan. She took up the cause in 2008 and was active in the restoration movement for the historic Prahalad Temple but soon grew disillusioned with the politics.

A numbers of ancient Hindu temples have disappeared or are now occupied by land grabbers. These include Sun Temple on Suraj Kund Road-- and Narsingapuri and Prahladpuri Temples. Javed Akhtar Bathi, a researcher in history and literature, says there are cultural benefits to heritage preservation. He believes that such efforts keep communities beautiful, vibrant, and livable as they give people a stake in their surroundings. Historic buildings provide a sense of stability and a tangible link with the past that all can experience, he says.

Researcher and political activist Malik Tariq Saeed says that according to Hindu mythology, King Hiranyakashipu had ruled over Multan about 2,800 years ago. He had challenged the Lordship of Vishnu. His son, Prahald was the supreme devotee of Lord Vishnu. Hirnyakashipu had tried his best to kill his son but failed. As a last resort, he called his sister, Holika for help. Holika had a special fire-proof cloak which she put to use. A bonfire was started and Hiranyakashipu asked Holika to sit with his son Prahlad in her lap in the hope that the fire will burn Prahlad. Without fear of death, Prahlad started chanting mantras in praise of Lord Vishnu. As the fire grew, a strong breeze started swaying Holika’s cloak. The cloak flew from over Holika and covered Prahlad. It was then that she was charred to death and Prahlad remained unharmed. Since then, the night is celebrated as ‘Holika Dahan’ (or holi festival), narrates Malik Tariq Saeed.

"Multan is the birthplace of the colourful Holi festival. The tradition of the Holi festival started at Parhlad Bhagat Temple, which has now vanished from the scene", says Bathi.

The temple was located in Qila Qasim Bagh, adjacent to the shrine of Hazrat Bahauddin Zakariya.

ETPB documents show that a comprehensive revival plan for Prahlad Temple was designed in 2014.  Siddique ul Farooq, then the chairperson of the ETPB, held a meeting in Multan, and on May 2, 2015, announced the plan for restoration of Parhalad Bhagat Temple. He also held a meeting with Punjab Archeology officials to assign them tasks for the restoration of the temple. The reconstruction of the temple was to start in the first week of July 2015 but after his removal from the post of the ETPB chairperson, the plan went up in smoke. The Supreme Court of Pakistan ordered removal of ETPB chairman Siddique ul Farooq in January 2018 for exceeding his tenure and ordered the appointment of an apolitical person.

Among members of the ETPB, there is the opinion that the government should figure out mechanisms to help prevent growing financial irregularities, administrative apathy and political appointments.

"My reservation is that ETPB was established in 1960 to look after the Evacuee Trust Properties, lands left by Sikhs and Hindus on migration to India at partition in 1947-48. This policy of appointing only Muslims as ETPB chairperson for supervising property of non-Muslims is not fair. The protection of temples, monuments is not possible until a non-Muslim is appointed as ETPB chairperson."

"The ETPB is administering 1,130 temples and gurdwaras in the country. Only 30 of these are functional," he says.

"I have repeatedly requested Prime Minister Imran Khan for the appointment of a non-Muslim as ETPB chairperson but the matter is still pending and temples and gurdwaras continue to suffer", he says.

Dr Vankwani says that the Supreme Court of Pakistan had ordered November 15, 2018 that the ETPB chairperson be appointed from the Hindu community. However, the apex court’s orders were ignored and a Muslim candidate was chosen for the post again.