The magnitude of the Karakoram Anomaly

Glaciers around the world are melting quickly but some in the Karakoram Range are stable. Climate experts discuss the issue to make sense of what is happening, and how much we can bank on this anomaly to fight climate change 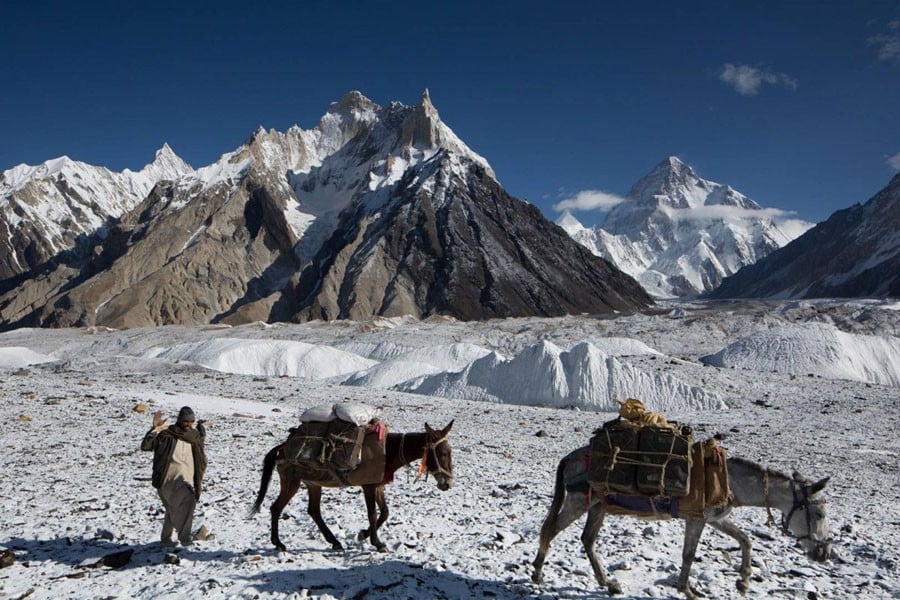 Ajaz Ali is a resident of Gojal valley in district Hunza. Gojal valley is home to several glaciers which not only feed rivers but also meet the daily requirements of local communities. But for the past many years, Ali and other villagers of the valley have been witness to a markedly different behaviour of these glaciers. Experts call this the "Karakoram Anomaly."

The Karakoram Anomaly is a situation of general stability in glaciers in the area in contrast to glacial retreat worldwide. Ali explains how the unpredictable behaviour of Ghulkin glacier is affecting the locals of Hussaini village in Gojal valley. "These people depend on the water channels fed by Ghulkin glacier for their daily requirements. At times the glacier reduces in size and the channels start to dry up. This leads the communities to excavate these water channels to continue abstracting water. And now, the glacier has again increased in size… Due to the excavation of streams, there are now chances of downstream floods." Groundwater abstraction is the process of taking water from a ground source, either temporarily or permanently

Ghulkin glacier forms glacial lakes inside it and "if an outburst occurs it floods the Karakoram highway. And when it doesn’t burst, the glacier surges and damages the highway," tells Ali.

To highlight the plight of the mountain communities living under the fear of Karakoram Anomaly, Dr Asif Khan, a PhD in water and climate change from the University of Cambridge and a Post-Doctorate from International Institute for Applied Systems Analysis (IIASA) presented their case at the 4th Indus Basin Knowledge Forum (IBKF) in Nepal on August 23. He says, "Of the three mountain ranges -- Hindu Kush, Himalaya and Karakoram -- the glaciers in the western and central Karakoram are either slightly losing mass, or showing stability, or even gaining mass."

The IBKF4 was organised by International Centre for Integrated Mountain Development (ICIMOD) -- a regional intergovernmental learning and knowledge sharing organisation with offices in the eight member countries of the Hindu Kush Himalaya (HKH) region: Pakistan, Afghanistan, Bangladesh, Bhutan, China, India, Myanmar and Nepal. It brought together policy-makers, members of the media and academia to find out innovative ways to further research and kick-start greater climate action. A particular focus of the knowledge forum was to explore how to communicate the science of climate change effectively - in a way that resonates with policy-makers as well as the public.

During the presentation, Dr Khan informed the participants that glacial lakes at the Karakoram Range did exist and if the warming climate prevailed for longer periods with global rise in temperatures? , the numbers of sunny days was likely to increase. He pointed out that these changes could lead to increased water availability, and floods caused by glacial outburst. Both of which could have dire repercussions.

Even though the Karakoram Anomaly is largely believed to be a good sign for water resources in the Indus Basin, the anomaly has implications - among these one is its inability to sustain river flows. "Low glacial melt caused by low temperature in the Karakoram together with reduced snowfall and early snowmelt is leading to reduced flows in the Upper Indus Basin," says Dr Khan.

Even though the Karakoram Anomaly is largely believed to be a good sign for water resources in the Indus Basin, the anomaly has implications - among these one is its inability to sustain river flows.

In June 2019, the Tarbela Dam had reached the dead storage level, which was the lowest in the last 10 years. During these summer months, the inflows and outflows from Tarbela Dam were the same due to which the water couldn’t be stored for agriculture and hydropower generation. "The water from the western and central Karakoram Range contributes 20-30 percent to the Indus River flows during June-August. The Karakoram Anomaly is contributing to low flows in the Indus River, which is affecting irrigation and energy sectors downstream," explains Dr Khan.

Dr Khan warns that though the short-term effects of the anomaly are contributing to low flows in summer, the long-term impacts can be far more alarming. "It may dramatically increase the river flows that will lead to floods and Glacial Lake Outburst Floods (GLOFs)."

Dr Ghulam Rasul, former Director General of Pakistan Meteorological Department (PMD) and currently associated with ICIMOD, said that as climate change is leading to an upward shift of snowline across the HKH region, "a day will come when these rising temperatures will spare no glacier from the impact."

"Even under the Paris Agreement, if there is a 2°C rise in temperature by the end of this century, the phenomenon of Karakoram Anomaly will cease to exist," he adds.

The World Meteorological Organisation (WMO) has already warned that out of the 18 warmest years on earth, 17 have occurred in the first two decades of the 21st century. "This year is most likely to be the warmest on record because June and July were the warmest since 1850," says Dr Rasul.

He explains why glaciers in the Karakoram region are behaving abnormally. "These are some high elevation glaciers where greater mass of seasonal snow and glacier ice remains under below-freezing temperature for most part of the year. Therefore, larger mass of snow is converted to ice, adding to the accumulation than melting. In other cases, the accumulation is less than melting which results in the rapid recession of glaciers."

"It is just 1 percent of the total glaciers which are exhibiting the Karakoram Anomaly. It is misleading when we emphasise the 1 percent and ignore 99 percent - it confuses the policy-makers," he informs.

He adds, "In fact, we should be worried about the 99 percent glaciers that are melting at a rapid speed. The contribution of Karakoram Anomaly glaciers to the Indus Basin is far lower than the receding glaciers of HKH region."

The world has now seen carbon levels hitting 411 ppm (parts per million) threshold with intensive forest fires in the Brazil’s Amazon and Greenland and melting glaciers all around the world. Dr Daniele Bocchiola, Professor of Hydrology and Water Science at Politecnico di Milano, says, "The present state of Karakoram glaciers may be expected to persist for 2-3 decades more but under proceeding global warming as expected during the 21st century, glaciers’ stability is expected to break down and Karakoram Anomaly would come to an end."

Disagreement among the scientific community is natural and certainly needed to advance research but the Karakoram Anomaly does not, in any way, refute the reality of climate change. It is the need of the hour to develop a broader consensus on climate change in Pakistan and allocating more resources in adapting and mitigating the phenomenon.

The magnitude of the Karakoram Anomaly