Pakistan’s symbolic gesture on Kashmir aims to serve three purposes: to stand shoulder-to-shoulder with the Kashmiris; vent rage at India; and to internationalise the dispute 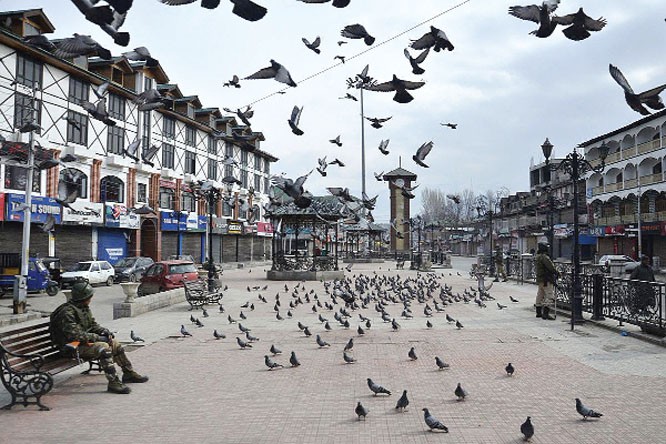 Pakistan, on August 30, came to a formal ‘standstill’ in a show of collective solidarity with the people of Kashmir. Thus for 30 minutes, according to the state-sponsored narrative, traffic lights remained red, bringing traffic to a halt while sirens blared and the national anthem was sung; and the flags of both Pakistan and Kashmir waved dutifully. To underscore the solemnity of the occasion, Prime Minister Imran Khan addressed the nation live from the pulpit of his official office.

There is as yet no conclusive word from Indian-administered Kashmir - either from the government or from independent voices - on how this unorthodox show of support may have impacted the Kashmiri plight. And given that the Valley is under near absolute communication lockdown, this was to be expected. Elsewhere, however, the response by mainstream India appeared at best amused and, at worse, derisive. The international community, for its part, remained largely underwhelmed. Even here, social media reflected both a sense of mirth mixed with sheer irritation. Although local television channels and newspapers, as anticipated, filled airwaves and column inches with righteous rage at India; taking cues from the prevailing state narrative.

This symbolic gesture must be viewed from within the broader context of the official response to Indian Prime Minister Narendra Modi’s sudden annexation of Kashmir; effected by repealing the Valley’s special status to give way to the states of Kashmir and Ladakh. Thus these ‘new’ union territories now fall under New Delhi’s legal and administrative jurisdiction. All of which represents a political - not military - move. And one that was not entirely unexpected given that Modi’s Bhartiya Janata Party (BJP) had prioritised resolving the ‘Kashmir problem’ back when it hit the (re)election campaign trail earlier this year. The shock-value comes from how swiftly it fulfilled this pledge after forming a government at the Centre.

Pakistan’s comeback therefore aimed to serve three purposes: to stand shoulder-to-shoulder with the Kashmiris; vent rage at India; and to internationalise the dispute. Towards this end, the federal cabinet announced that this half-hour of silence will take place every week for an indefinite period. Though as we await more orchestrated outrage - so, too, should we be mindful of diminishing returns. Simply because real anger and support are never governed by administrative fiat.

What is now required is an overview of the challenges that the unilateral Indian move poses for Pakistan. Most notably, the timing could not be worse. For one, Islamabad is grappling with meeting the rigid conditions of a coercive Financial Action task Force (FATF) that, among other things, obligates a crackdown on jihadist groups as well as funding networks, which all too often adopt Kashmir as a rallying cry.

Prime Minister Imran Khan has gone as far as publicly revoking Pakistan’s nuclear first-strike policy as a counter-measure to India’s superior second-strike capability. It is good that war is not an option. But if this is the case then it means that New Delhi has successfully annexed Kashmir without firing a single shot.

Elsewhere, the Centre must also contend with the looming deadline by which to facilitate and support an Afghan peace deal; primarily between a US desperate to exit the longest war in its history and the Taliban, whom the Americans believe it is Pakistan’s burden to oblige. In many ways, this translates into an unwavering policy focus rather than traditional options that envisage adopting ‘other means’ to tackle the issue. This time around, Islamabad enjoys no wiggle-room when it comes to securing the Afghan quagmire which necessarily obviates any chance of militancy on either the western or eastern fronts. Not least because the country needs hard-to-get money to stave off bankruptcy while focusing on restoring economic calm in the wake of political engineering at home.

Lastly, there is the not-so-small question of in-country support for possible alterative responses to Indian provocations on Kashmir. An opposition pummelled into near paralysis by the National Accountability Bureau (NAB) and the Establishment is in no mood to unconditionally rally round an arrogant but unthinking government. Without such crucial backing, the Centre cannot claim national consensus on Kashmir; much less garner critical changes in how these concerns are articulated by the state.

The only viable option is for Pakistan to adopt a policy of passive aggression as opposed to one of pure aggression. For it can no longer threaten war or the use of military force to counter India’s fiendishly clever political move on Kashmir. Similarly, it cannot mobilise non-state assets at a time when they are supposed to be locked away and not even risk being seen doing soft politics on either Kashmir or Afghanistan. Zero- tolerance for this at the global level has even been codified into the rules for FATF compliance. Moreover, with a tanking economy - thanks to a lacklustre government that boasts of being ‘on the same page as the Establishment’ - the state is now compelled to debunk conventional narratives that portray Pakistan’s military and nuclear arsenal as biggest safeguards against Indian political and military potential and rhetoric winning the day.

Indeed, Islamabad is forced to both play and ply peace while muting aggression. That this comes at a time when New Delhi has struck a near fatal blow against Kashmir - the jewel in the Pakistani state’s crown of religious nationalism and symbolising the ‘unfinished agenda of Partition’ - means that the irony could not be starker. For while the country’s long-hounded civil society and political classes have always supported peace and engagement with India - the establishment and the government now find themselves in the uncomfortable and miserable position of being forced to emphasise peaceful and diplomatic solutions while traditional allies choose to bestow Modi with award after award.

Pakistan is therefore finding it hard to handle an India-induced political challenge that has stripped Islamabad of conventional reactions of hostility as an informal means of exercising hubris. No wonder, then, that the civil-military leadership - despite warning of fighting back if war is imposed - has been officially advocating that military aggression is not an option. On September 2, 2019, Prime Minister Imran Khan went as far as to publicly revoke the country’s nuclear first-strike policy as a counter-measure to India’s superior second-strike capability. It is good that war is not an option. But if this is the case then it means that New Delhi has successfully annexed Kashmir without firing a single shot. Moreover, this suggests that now is not a good time for a politically and economically depleted Pakistan to court the world to help it mount an equally decisive political counter-stance against India. The bottom line being that Islamabad can’t fight - its goose is well and truly cooked.

This, then, leaves the regime and its ‘same page’ strategic allies with nothing more feasible than public expressions of solidarity with the Kashmiris who may not even be aware of this grandiose show of concern given prevailing censorship there. But even if they did, Pakistan has ironically chosen, albeit reluctantly, Gandhi’s pacifism over Iqbal’s militarism in dealing with India. While this will likely fail to liberate the Kashmiris - it has seemingly freed this country form all self-deception.

There is no one in Pakistan and India speaking for Kashmiris

Who speaks for the Kashmiris? India has thrown one of the most draconian censorship and coercive dragnets on a large community or a geographic region in recent global memory. The New Delhi-administered part of Kashmir has been under blanket curfew for over four weeks now. All communications -- internet, most land and mobile phone lines and virtually all local media -- are shuttered.

While India has often exercised communication shutdowns in Kashmir, this latest instance is unprecedented -- in its scale and longevity. In 2018, there were nearly 200 large-scale internet shutdowns in 25 countries, according to digital rights watchdog, Access Now. India was the worst offender. It shut down internet in 134 out of the 196 large-scale shutdown instances. It looks like it will remain the top offender this year too.

International Federation of Journalists and Reporters Without Borders report large-scale arrests and coercive intimidation of journalists in Kashmir. Most mainstream Indian media carries little or no Kashmiri voices -- that may be because nearly all Kashmiri political and civil leadership is arrested or detained. An aggressive BJP-led narrative has seemingly drowned out protest against widespread violations of rights of Kashmiris by non-Kashmiri intelligentsia in India.

In Pakistan, too there are no Kashmiri voices in the country’s media from Indian-administered Kashmir. While Pakistani media is dominated these days by the Kashmir issue, most of it is the official narrative that sees Kashmir as an issue between Islamabad and New Delhi rather than Kashmiris. There is no one in Pakistan and India really speaking for the Kashmiris right now. That is heartbreaking because after the right to life the right to freedom of expression is the most fundamental of rights.