Guests attending the Lahore Dolphin Show are left in awe of the human spirit for having tamed yet another beast. But could this encounter possibly be a crime against nature? 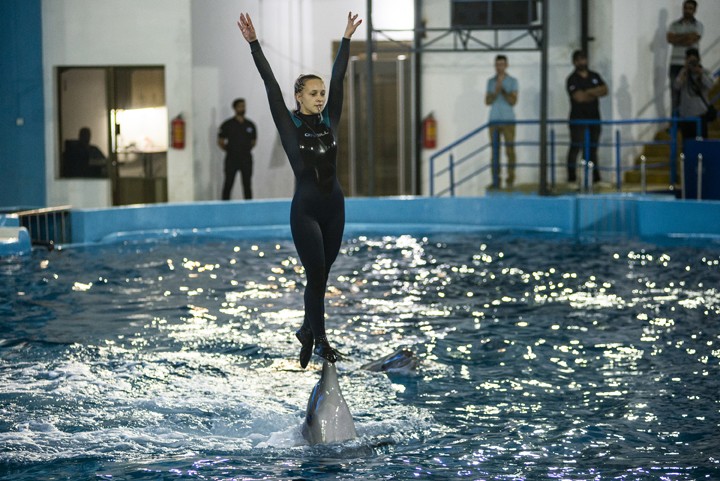 The trainer touches the smooth, rounded forehead of one of the bottle-nose dolphins a hand cue, maybe, for the other dolphins to acrobatically spin within the pool.

Amidst cheers from the crowd the act is complete, and the cetaceans come splashing out of the pool in prospects of a reward from their trainer. A small treat is tossed into their mouths and away they go back into the water. Guests attending the Lahore Dolphin Show are left in awe and admiration for the human spirit to have tamed yet another beast. But could this encounter possibly have been a crime against nature? Well, some think so.

The Lahore Dolphin Show opened to the public on August 17 with the organisers calling it a pleasant addition to the city. The organisers, in collaboration with a Russian company Sea Show, brought four bottle-nose dolphins and three sea lions to entertain the crowds visiting the show.

While the show is already being termed a success with the Governor of the Punjab, Chaudhary Mohammad Sarwar, endorsing it, conservation organisations and animal rights activists are questioning the ethics of keeping typically wild animals in captivity.

This trend of making dolphinaris/aquariums in the name of entertainment facilities may be picking up in Pakistan but some countries of the world such as Canada and India have already banned cetaceans in captivity and are rolling back the facilities made to host such shows. Visitors to the Lahore Dolphin Show believe that there is a growing need for zoos and aquariums to educate people about animals. Families coming in with their kids are of the opinion that people especially children develop a passion for animals that fuels a lifetime interest in conservation.

But conservation organisations in Pakistan believe the benefit is widely overstated. "The only education these dolphinaris/aquariums are giving to the people and the children is bad education," says Mohammad Shahmir, a conservationist working with an international conservation organisation. Shahmir believes that conditions of our zoos and our treatment towards wildlife are proof enough of the fact that such activities are doing nothing for conservation. "To educate oneself about these cetaceans one can observe them in the wild from a safe distance from the coastal areas of the country. If not that, there is a whole lot of literature and documentaries on the subject on the net," adds Shahmir. "In many cases, when people see dolphins in this kind of setting the message that they take away is not in fact the one we want them to. In the natural world, these animals are completely different which makes us wonder what kind of education these facilities are giving to people!"

Similarly, Dr Uzma Khan, Global River Dolphin Initiative Coordinator at WWF-Pakistan and IUCN/Cetacean Specialist Group member, is of the opinion that dolphins jumping through the rings, playing with balls, or doing others tricks have absolutely no educational value; it’s a purely commercial venture.

"Music and public noise  can be stressful for dolphins," she adds. "Usually, dolphins are kept hungry and in small pools, while in the wild they’d swim with high speed. According to a data, their speed is about 18 miles/hour."

Critics of such shows are armed with a growing body of science which shows that dolphins are intelligent, emotionally sensitive and self-aware creatures that are not meant to be captured and limited to enclosures.

Critics of such shows are armed with a growing body of science which shows that dolphins are intelligent, emotionally sensitive and self-aware creatures that are not meant to be captured and limited to enclosures. Ironically, organisers of events such as the dolphin show claim that conservationists too have studied dolphins in aquariums before seeking to convince others that an aquarium may not be an appropriate place for them.

Amidst this debate, millions of people around the world still pay to see dolphins and other cetaceans at marine parks. Like the crowds visiting the Lahore Dolphin Show they too say they love these animals. Their money is what makes this practice profitable. The growing popularity of these shows in developing countries means they count as tourist attractions and fuel the market for trade in these wild species. Even if a park has obtained its cetaceans from breeding facilities, promoting such shows stimulates sales and demand for cetaceans which are usually obtained from drive-fishing events like the one in Taiji, Japan. The brutality meted out to these creatures in these drive captures was documented in the film, The Cove, which famously exposed the industry leading to the start on a debate of banning such shows in the developed world.

"There are various countries that have banned marine circuses, because of the concerns over welfare and implications on conservation," adds Uzma Khan,  while qouting the recent ban in New Zealand of swimming with wild dolphins.

"Pakistan should not allow such activities. The dolphin species being used in Lahore is listed under two conventions to protect them."

The debate around the topic has only just begun in Pakistan. At least it has a semblance of a debate. What conservation organisations needs to do is to reach out to authorities and initiate a conversation regarding this topic. Despite being signatory to many international conventions such as the Convention on Conservation of Migratory Species of Wild Animals, Pakistan still lags behind in formulating a proper plan of action to discourage such activities. Identifying loopholes in the bureaucratic setup that doles out No Objection Certificates (NoC) to such shows is also paramount to the cause. The Dolphin Show might as well be the opportunity these conservation organisations require to start a debate around this topic.

Until that time, visitors to the Lahore Dolphin Show will remain exhilarated at the end of every performance. To them in the absence of a proper awareness campaign, there is something authentic, even primordial, about the experience; a sense of something that could not be replicated in any virtual tour.