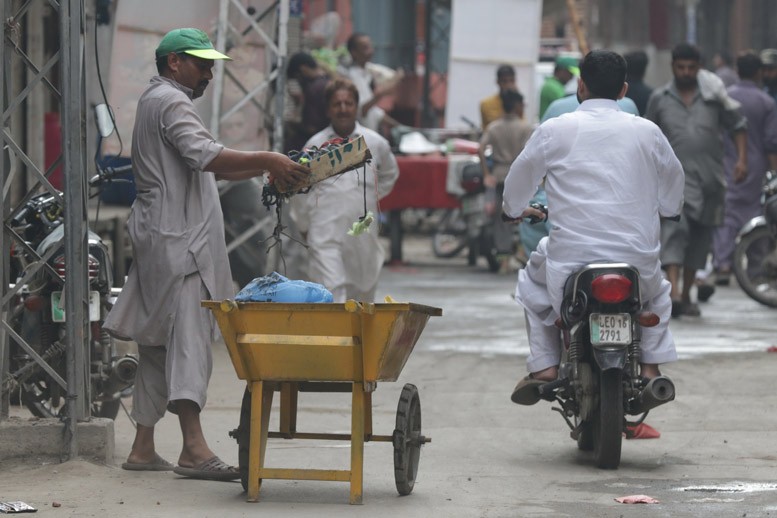 Pervaiz Masih’s (name changed on request) job is to keep the streets of Lahore clean and remove all kinds of filth. He does not have a strict work regime -- he steps out when duty calls.

Whereas the residents of the colony shun the sight of the sewerage in the area, Masih dares to go down into the sewers and can be found removing blockages for long hours, until the overflow of wastewater is checked.

He knows that entering a manhole without safety equipment is dangerous, but he does not have it on him. He did get suffocated by toxic gases inside manholes a couple of times but this did not deter him from doing his job. This is not his passion but it is the only job opportunity he has and the only skill that he is equipped with.

There are health and life risks but there is another thing that worries him: a daily-wage contract worker has zero job security. There is no medical coverage, no risk allowance, no pension and benefits. He is meagerly paid by the Water and Sanitation Authority (WASA). However, there are times when citizens pay him bakhshish (tip) if they are satisfied with his work.

Simply put, Masih is not recognised as formal labour. He says minimum wage rules are not applicable to him and that he is paid only for the day he works and gets nothing if he takes a day off.

Popular acceptability has added to his woes. "If I want to take up some other job and earn more, I cannot," he says. For example, "I cannot find a job at a roadside hotel or sell food items because people think that I am na paak (impure), because of the nature of my work.

"So, I clean drainage, remove waste from private homes, factories etc, to add to my meagre income," he tells TNS.

This is a glimpse of the life of a sanitary worker in the city and calls for action at policymaking level to improve the conditions of sanitary workers.

Sanitary Workers’ Association Lahore, (SWAL) President Shahid Mushtaq raises concerns about the state of sanitary workers. He says it is unfortunate that even the regular sanitary workers are discriminated against and other cadres of the same departments are given preferential treatment.

Mushtaq says that there are about 20,000 sanitary workers in Lahore out of which 8,000 are daily wagers. Most of these are employees of the Metropolitan Corporation of Lahore (MCL), provided on a contractual basis to companies associated with the Lahore Waste Management Company (LWMC).

Mushtaq complains that sanitary workers are not given medical facility despite the fact that they are highly vulnerable to occupational diseases. He says that the government must act without delay to apply labour laws to these workers in order to improve their standard of living. Hiring people on daily wages is a way to keep them out.

Emanuel Masih who works for WASA on a permanent basis says, "There are no safety measures for sewerage men working for WASA. Though there is a medical facility but it is much too complicated and almost impossible to avail. I have received a risk allowance of Rs10,000, meant to be paid on a monthly basis. However, it is paid to sewerage workers only upon the discretion of the officers.

The president of Punjab chapter of Pakistan Workers’ Federation (PWF) Chaudhry Naseem, says that his federation is against the daily wages system and work on a contractual basis. He says it is against human dignity and is just another way of blackmailing the workers. He says the federation is carrying out a movement to improve the situation of the workers.

He believes contractual work and daily wage law must be amended and there must be no provision of probation period. Administration play tactics to delay regular employment of sanitary workers therefore, these workers do not get any benefits. "It is the duty of the state to address health issues for such workers and provide EOBI benefits to them. All sanitary workers must be brought under the umbrella of safety network on a priority basis," he adds.

Spokesperson of Lahore WASA, Imtiaz Ghouri, says WASA provides fringe benefits to its regular employees, but daily wagers cannot avail these. "There has been no causality sewerage workers during the past three years. WASA also pay ‘dirty job’ allowance to these workers on a monthly basis, contrary to the allegation by some workers," he adds.

Ijaz Alam Augustine, the Punjab minister of Human Rights and Minority Affairs, says, "We have proposed a new bill for sanitary workers’ safety and improved working conditions. He says at present sanitary workers do not enjoy full labour rights but he is advocating that they must be entitled to basic benefits like social security, pension and gratuity."

Deputy Director, Health and Safety, Punjab Labour Department, Arshad Mahmood agrees that some workers are out of the ambit of law. He says the good thing is that things have started moving in the right direction.

Mahmood says the Punjab has passed an Occupational Safety and Health law which covers all those workers vulnerable to injuries, occupational hazards, workplace accidents etc. These rules will hopefully cover sanitary workers as well and serve as a stepping stone in their journey for recognition as formal labour.